A Buddhist problem with Christmas

Washington, USA -- I grew up in a white, liberal, East Coast family, Unitarian with Presbyterian roots, and we celebrated Christmas in a typical American way: the tree, the school pageant, the Burl Ives carols, the Claymation Rudolph on television. Most of my memories of the holiday are happy ones. But one year—I was 9 or 10—things took a bizarre turn: I woke up and raced down to the tree, inspected all the gifts, and found, to my horror, that out of all of them only two or three were marked for me. My brother (it seemed) had gotten six times as many. It was the younger child's worst nightmare: left out, given the scraps. 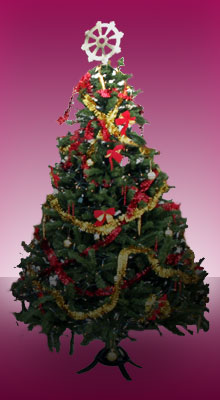 I burst out crying and threw a screaming fit. I was shown the little packages underneath that contained the things I really wanted—a Swiss Army knife with my name engraved on it, a Bruce Springsteen tape. But it took an hour to placate me, as I remember.

I'm sure most American adults can dredge up a similar story from their childhood. Of all the holidays we celebrate, Christmas is the one with the highest stakes, the most payoff, and no one understands this better than children. The threat of lumps of coal in the stocking is, in a certain perverse way, very real to them: not because they fear getting nothing but because they fear not getting enough. Parents, too, understand instinctively that presents on Christmas are a test of their love and act accordingly.

Anthropologically speaking, there's nothing unique about our slightly mad celebration of abundance and good fortune at the darkest point on the calendar, with its attendant hangover. I witnessed this some years ago when I lived in Hong Kong during the lunar New Year, which the city celebrates with the same brazen commercial fever it applies to everything else. The highlight of the celebration for children is the distribution of red lai see packets filled with money.

For the last 11 years, I've been a student of Korean Zen, and as an American Buddhist I'm not quite sure how to feel about Christmas. It's not that I feel disloyal celebrating the holiday. Mahayana Buddhism, the larger tradition to which Zen belongs, encourages coexistence among religious traditions. When I asked one of my teachers recently how he feels about Christmas, he said, "When I'm at the temple, we celebrate Buddha's Enlightenment Day [the first week of December]; when I'm with people celebrating Hanukkah, I celebrate that; when I'm with people celebrating Christmas, I celebrate Christmas."

In many ways, I love Christmas, and not just because I generally enjoyed it as a child. There are many parallels between the Christmas story and the story of Buddha's birth.

East Asian Buddhism even has a figure strikingly analogous to Santa Claus—Budai, or Hotei, the enormously fat laughing monk, whose name literally means "cloth sack," a reference to the beggar's bag he carries. Budai's bag is said to be always be full of presents for children; he is often pictured with tots climbing all over him. In China and Japan he is a symbol of abundance and sometimes even overindulgence.

But at the same time, I can't help feeling that something is intrinsically wrong with the contemporary American version of Christmas. It's not simply that the gift-giving has become unmoored from the religious content or that the holiday has become "commercialized." (As Leigh Eric Schmidt's book Commercial Rites: The Buying and Selling of American Holidays makes clear, Christmas in the United States has always been a commercial ritual.) What's awry, from a Buddhist point of view, is that for the most part we've lost the ability to let gifts make us happy. The means—gifts—and the ends—happiness—have become detached. Overwhelmingly today, we assume that the way to make people happy at Christmas is to give them what they have told us they want.

This is true of children and adults. The whole process of wish lists, of clear and defined expectations, is in a sense what makes the contemporary American Christmas possible.

Wish lists, however, mean that the giver takes no responsibility for—no ownership of—the gift. From a Buddhist point of view this is inherently a mistake. Whatever we give to someone else we also, in a sense, receive ourselves. The gift itself has only the existence and meaning we assign it. Another way of saying this is that gifts are an extension of our karma.

The most obvious examples of this are gifts that are dangerous or inappropriate—a rifle for an 11-year-old, a car for a 16-year-old who hasn't learned to stop at stop signs. But consider a more benign example. Say that you have a 16-year-old daughter who is dying for a pair of $500 skis. You can afford it; you've budgeted that much to spend on her; and buying them will make her extremely happy, in the short term. On the other hand, you feel it's inappropriate—even outrageous—to spend that much money on a present for a teenager.

Well, so what? It's not the end of the world to have a daughter who has expensive tastes. If you look at the gift simply as a transaction—I have this money, what would you like me to do with it?—it makes no sense for you to censor your daughter's desires. Nonetheless, after you buy these skis, the world will be slightly altered. She will feel validated about receiving extravagant presents as tokens of love, and you, by participating in the transaction, will have affirmed her choice. Nor do your guilt and frustration just disappear:

They become part of the exchange itself, part of the price of her happiness. Your relationship is shaped by the gift, instead of the other way around. It's such a subtle shift that you may not ever be aware of it, but the consequences, ultimately, are real.

There's no easy way to extricate ourselves from these binds of obligation and reassurance. For those who want to cut down on expense or shopping there are now many Web sites dedicated to making the season simpler—a worthy goal. But Christmas isn't just about being virtuous; it's about feeling lucky to be alive and grateful for the abundance we share, without letting that abundance drive us crazy. This requires a sense of proportion—an instinct for when more becomes enough. I'm certainly no paragon here: After reading this essay, my wife pointed out that my Amazon wish list has 79 items on it. Many of those titles have been up there for years, and I don't really expect anyone to buy any of them.

But the little boy in me wouldn't mind at all.