Strength lies in love and peace

Kuala Lumpur, Malaysia -- The dramatisation of Gandhi's "inner dialogue" in a recent play "Sammy" depicted him and his conscience discussing and debating the ideals and the ideas that moulded his life. 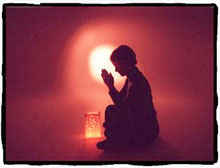 After studying both the Bible and the Bhagavad Gita, he discovered the undying truth: love and peace were commodities of the strong. With this idea as his bedrock, he launched the non-violence movement. Many would find it surprising that the saviour of the colonialists inspired the anti-colonialist: "I am prepared to die, but there is no cause for which I am prepared to kill."

He was firm in his view that violence had no part in his movement simply because "violence... when it appears to do good, the good is only temporary; the evil it does is permanent."

Love, truth and peace are weapons of such great power and might that they are unassailable and it was with these weapons that he routed the British from India.

The inner dialogue is a crucial step for all those who intend to live lives of integrity, rooted in values. We need to be completely and utterly honest with our own selves, to closely examine our convictions, our beliefs, our actions and our thoughts. We need to measure whether these reflect our highest aspirations for ourselves.

Such towering beacons of peace and non-violence are needed now more than ever. In the current climate, when too many people feel that war, terror and violence are the only effective means of putting forward an agenda, a Gandhi of any race, any creed, any faith is most welcome.

But Gandhi did have a shortcoming and that was his lack of outer dialogue with some Muslims, in particular Mohd Ali Jinnah. If Gandhi had been able to engage with Jinnah effectively, the course of India and Pakistan may have been very different.

This clearly shows that although inner dialogue is exemplary, outer dialogue is just as critical. To build links between people, between nations and between cultures, real dialogue is required.

So it was refreshing to hear someone saying: "In the Western world it is widely held that only positivistic reason and the forms of philosophy based on it are universally valid. Yet the world's profoundly religious cultures see this exclusion of the divine from the universality of reason as an attack on their most profound convictions.

A reason which is deaf to the divine and which relegates religion into the realm of subcultures is incapable of entering into the dialogue of cultures... The West has long been endangered by this aversion to the questions that underlie its rationality, and can only suffer great harm thereby ..."

I felt the speaker hit the nail on the head: perhaps this was the missing link in the world dialogue today. How can one effectively bridge one culture which is completely secular with another which is completely religious? Because one's way of thinking excludes the very basis of existence for the other and as such both cannot really "dialogue."

Most would be surprised to know that these passages are from the Pope's speech which has sparked off so much controversy. It may well seem that an obscure quotation may have hijacked the content and the aim of the speech.

However I cannot but feel that though there are some lone players encouraging dialogue and understanding there are greater forces at work. These forces gain more from polarising people than bringing them together. I cannot help but also feel that the protests and the threats against the Pope and Christians was the precise image that a media with a specific agenda was looking for, and they were handed it on a platter. These are all pieces of evidence used by certain powers to create and consolidate an identity and an image of Islam and Muslims.

I could not help but think had only one learned, religious scholar from any one of the Middle Eastern countries stood up and said, "I agree with you on the substance of what you said but I feel that your example is inappropriate and thought brother, you know not what you say, I forgive you," this would have turned the tables. Would that have been too difficult?

------------------
Sivananthi T. is a communications consultant who works on gender, urban governance and transparency issues.