Nalanda University: It's time Asia paid back the 'knowledge' debt

New Delhi, India -- IT is payback time for the world community, especially East and Southeast Asia, for what it received by way of knowledge from an ancient Indian university that is in the throes of revival as an international seat of learning. 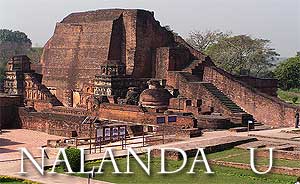 It is heartening to note that there is some rallying for the Nalanda International University after a decade-long effort. Former Indian president A.P.J. Abdul Kalam, as its Visitor, heads a nine-member team that has renowned scholars, including Nobel Laureate economist Amartya Sen.

Originally founded in 427 AD, the university was destroyed in 1197 AD. During its 750 years' chequered life, it attracted students and scholars from Korea, Japan, China, Tibet, Indonesia, Persia and Turkey.

Before Oxford, Harvard, Yale and others, Nalanda was acclaimed as the greatest university in the world. Devoted to Buddhist studies, it also trained students in fine arts, medicine, mathematics, astronomy, politics and the art of warfare.

The university was an architectural and environmental masterpiece -- eight separate compounds, 10 temples, meditation halls, classrooms, lakes and parks, a nine-storey library, dormitories for students -- housing nearly 10,000 students and 2,000 professors.
The name probably comes from a combination of nalam (lotus, the symbol of knowledge) and da, meaning "to give", so Nalanda means "Giver of Knowledge". And that is exactly what the university did.

The revival idea was mooted in the late 1990s. Unesco was approached and senior Indian politician George Fernandes, who represents Nalanda in parliament, appealed to the Japanese for help.

Others joined in 2006 as Kalam, then the president, seized the initiative. After the Bihar legislature enacted The University of Nalanda Act 2007, a "Nalanda Mentor Group" was formed.

Meeting in Singapore last November and in Tokyo in December, they agreed that Nalanda should be "an international university enjoying academic autonomy. It would be a secular academic institution".

The Mentor Group underlined the importance of the project in the context of "an Asian renaissance" and finalised details of the university that would be guided by "a global philosophy while maintaining local relevance".

According to the blueprint, it will have schools in Buddhist studies, philosophy and comparative religion; historical studies; international relations and peace studies; business management and development studies; languages and literature; and ecology and environmental studies.

Its vistas would be expanded to cover neurosciences and touch on the frontiers of scientific research.

The Mentor Group also endorsed a proposal to establish a research-and-teaching entity in Singapore, to be called the Srivijaya Centre, which would work in co-operation with the Nalanda University.

A framework for the proposed university will be finalised for discussion at the next East Asia Summit in Thailand.

The Nalanda University, which is being set up at its original location, a 180ha plot of land 100km from Bihar's capital Patna, will initially have an international faculty of 46, to be expanded to 582 by the end of the 10-year project.

Visualised as a bridge between South and East Asia, the university will be built at a cost of Rs6.3 billion (RM505 million).

In Singapore, Prime Minister Manmohan Singh attended a reception hosted by his counterpart, Lee Hsien Loong, on the occasion of a special exhibition on Nalanda.

He used the occasion to launch an appeal to Asean and to the European Union for material and intellectual help.

Among the 116 previous artefacts, the exhibition featured bone relics from the only known archaeological find that can be linked directly to Lord Buddha.

Symbolic of the appeal for help was the Nalanda Copper Plate, which represented the royal patronage that the original Nalanda University received from the kings and nobles of yore.

What has begun is but a tenth of what was a campus that spread across 16 sq km as per the records of Hieun Tsang, the famous Chinese scholar who visited Nalanda in the 7th century.

So far, hardly 1.6 sq km of the ruins of the university have been excavated. To facilitate this, the National Remote Sensing Agency conducted a ground-penetrating radar survey to trace the location of the buried ancient structures. Questions persist even as the project gathers momentum. Why was the ancient university destroyed, not once but thrice? Why were hapless scholars attacked and libraries burnt?

The answer lies in man's cruelty to man as he chases -- half-heartedly and insincerely -- that mirage called peace. Violence seems endemic to our civilisation, whatever the cause, conquerors then were no different from what one sees today. Perhaps, so were their justifications.

Sadly, if Nalanda was destroyed by violence, Kalam's visit to the project this month too triggered violence of a different type. Angry farmers stoned Bihar's Chief Minister Nitish Kumar, complaining of non-payment or not being compensated enough, for the land acquired to rebuild the university.

Nalanda poses a small but significant challenge to the world community, particularly to Asians. As the "Asian Century" gets under way, will they fund a project that will help them refurbish the cultural and spiritual well-being of their present and future generations?

Writing in The New York Times, Jeffrey E. Garten, former dean of the Yale School of Management, expressed doubts: "...the bigger issue is imagination and willpower. It is not clear that the Asian nations are prepared to unite behind anything concrete except trade agreements, either for their benefit or the world's.

"It appears doubtful that with all their economic prowess, and their large armies, they understand that real power also comes from great ideas and from people who generate them, and that truly great universities are some of their strongest potential assets."

Garten says, and I fully endorse: "I would like to be proved wrong in these judgments. How Asia approaches the resurrection of Nalanda will be a good test."