Thai PM ignores the other side of the coin

Bangkok, Thailand -- ''Burma is a Buddhist country. Burma's leaders meditate.'' Prime Minister Samak Sundaravej brought that information out of Burma last week after an official goodwill visit. Nothing about his statement is wrong, and I personally believe it's true: the generals do meditate. 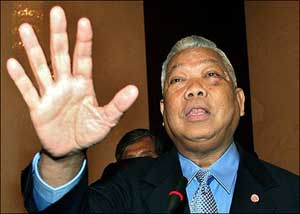 First, the top generals are probably meditating on how to rid themselves of their sins, or bad karma, after having ordered troops to shoot, kill and beat Buddhist monks in the September 2007 uprising.

Second, they meditate on how to rule the country forever, how to pass on power to the next generation of the military.

Actually, Burma's top generals have seriously been in deep meditation since 1988 _ on how to wash away the karma of killing 3,000 innocent people during the country's pro-democracy uprising.

Mr Samak also said, ''They [Burmese leaders] say the country lives in peace.'' If the prime minister and his delegation had been a little more sensitive when they signed their trade agreements (Thailand is Burma's third largest trading partner), they would have seen the spirits and ghosts of Burmese freedom fighters who sacrificed themselves while trying to win freedom for the Burmese people.

The Thai premier also said, ''Killings and suppression are normal there [in Burma], but we have to understand the facts. The general view of this country has always been one-sided, but there are two sides to a coin.''

Is Mr Samak saying killings and suppression should be accepted? He totally ignored the other side of the coin, the side that shows the people's suffering and human rights abuses.

Will the Burmese people now see the Thai government as a good friend of their enemy, the junta? How will they answer the question: Is Thailand a good neighbour?

In terms of foreign policy, it is a strategic mistake to place too much emphasis on friendship and cooperation between two governments at the expense of the people.

Doing the right thing in terms of friendship and cooperation between the people of both countries is more important and long lasting.

The current Thai government's ''neighbourly engagement'' policy needs to be directed not only at Burma's government but also at the Burmese people.

Of course, it's understandable that the Samak government wants to promote friendship, cooperation and strengthen economic ties with neighbouring countries, including Burma. It's also understandable that Thailand needs to do business deals with the junta, especially in the areas of natural gas and hydro energy. But there is a wise way of doing business deals while also promoting human rights.

Thai governments often act as if they have no real power when dealing with Burma. Blindly supporting the military regime only guarantees that serious issues, including refugees and migrant workers, will continue.

Yes, Mr Samak should remember a coin has two sides. He should send a clear message to the Burmese people that Thailand wants to do business deals with Burma, but it is first and foremost a friend of the Burmese people.