The Panchaseela (five precepts) and Buddhism

Bambalapitiya, Sri Lanka -- Dr. H. S. S. Nissanka's contribution to The Island Midweek Review of 14/5 is very informative and interesting. Among many other things, he refers to a "stormy session" at Kuliyapitiya Central College. 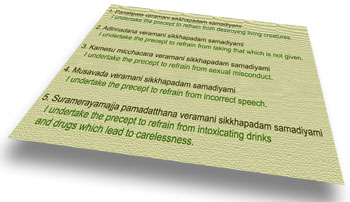 About 400 students had come from all over the country for a Dhamma discussion session. At 9 a.m. the session started. No panchaseela (the five precepts) was recited. Because of this the local crowds became very unruly, questioning both the reasons for not reciting the panchaseela as well as the 'Buddhistness' of the All Ceylon Buddhist Students Union. I tried to respond to them but was shouted down. Even Lionel Lokuliyana, the principal of the school (a greatly respected man not only among Buddhist leaders but also as a prominent writer) was shouted down.

The unruly crowds were turning abusive and violent (which reminds me of a typical parliamentary session in Sri Lanka) and Dr. Nissanka continues, "The crowds demanded an answer by a person who was a well known Buddhist and someone who has read the Tripitakaya. A small-made man in the last row of the hall got up to answer. When I saw that this was Dr. Adkiaram, I ran up to him and invited him to come up to the microphone. He came and sat there and Mr. Mivanapalana (the famous Buddhist scholar) introduced him to the audience. Dr. Adikaram (who had never recited the panchaseela) responded: "I have read all the books of the Tripitakaya, both in Pali and in English. What is the exact question you would like to ask?"

Dr. Adikaram said that there were famous scholars - Tripitaka acharias - who could recite by heart entire sections of the Tripitaka, and one may have read and re-read all the Buddhist texts and yet remain a crook or a murderer. Dr. Adikaram added, if one could at least understand one word of the Buddha like Appamada that would be sufficient for him or her to become an arahat. Dr. Nissanka, in his useful essay, says, "With the words of Dr. Adikaram we enjoyed a clam and quiet atmosphere at Kuliyapitiya Central College."

In a country which is predominantly Buddhist, whether we like it or not, we have an overdose of panchaseela blaring out from every street-corner through loudspeakers from dawn to dusk and again till the late hours permitted by law!

The popular misconception among the Buddhists is if one recites panchaseela or the five precepts not once but as many times as possible he becomes a good Buddhist.

What matters to a Buddhist is not the carrying out of the precepts but the mere utterance. This writer was once invited to a Dhamma sermon at his aunt's when Venerable Madihe Pannaseeha Thero delivered the sermon commencing with the five precepts or panchaseela which every member of the congregation recited audibly (except this writer).

At the end of the sermon which everybody seemed to listen to, the Venerable monk was driven to the Bambalapitiya Vajiraramaya by the aunt's son who was a prominent secretary to an equally prominent Buddhist Cabinet Minister.

On his return home he opened a bottle of special arrack which was shared by the pious Buddhist who had just promised to refrain from intoxicants. When the aunt discovered that yours truly was not drinking she whispered, "Jayatissata brandy tikak denanda?" and she, plus the entire congregation were shocked to hear Jayatissa chanting loud as ever "Surameraya majjha pamadatthana veramani."

The Buddhists in this country have made panchaseela a joke by consuming liquor not only after a bana sermon but even during bana! No almsgiving is complete without the men folk enjoying a 'sumihiri paanaya', even inside a room. All monks know this.

Chanting panchaseela is a system, a system being a method, a practice, the repetition of something over and over again. Does that make the mind sensitive, alive, active, intelligent?

On the contrary, it makes the mind mechanical. Any system, the Hindu system, the Christian system or whatever prevents the mind from perceiving what is true. Panchaseela does not lead you anywhere. It only makes the mind so dull that one does not realize even the meaning of a single precept after constant repetition.

Chanting panchaseela, repeating the words of a monk, implies authority. A mind that is held by authority is not a free mind, the authority of a monk or bishop, and such a mind is incapable of observing the truth. So repeating after somebody the panchaseela will never make one a Buddhist. If it were so this land must be heaven considering the number of times one hears it daily over the radio, TV and loudspeakers.

If you want to understand the truth of something whether it is panchaseela or anything else you must stop repeating it like a parrot. You must give your whole attention, all your energy. Then you will observe how the repetition of the five precepts or panchaseela is not going to make you a Buddhist though that is the popular misconception.

No wonder a great man like Dr. E. W. Adikaram, a man among men lived a holy life without ever chanting panchaseela. Such men are the true Buddhists!