The Ripening of America: The Election of Barack Obama

San Francisco, CA (USA) -- Last night as America elected its first black president, Barack Obama, the room I sat in, filled with tears whether or not they had experienced the pain of being black. 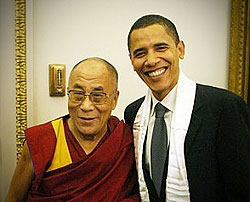 << Then Senator Obama with the Dalai Lama (filepic)

At the same time there was much loud celebration.  It reminded me of the time when my sisters and I would yell for my mother to come out of the kitchen because there was a black person on TV.  And she would come running.  Yet, I know that last night we were not only witnessing a black family on its way to the white house but that the true nature of things had been revealed once again.  There has always been change.

The environment for Barack Obama's win had long been established in the fertile grounds of slave abolitionists, civil rights workers, and the contemporary work of diversity trainers in this country.  As a matter of fact I am sure Obama is aware of the ancestors' fire from which his own visions were shaped.  This change we experience is not of our own making.  If we see it that way we are bound to a limited experience of success or failure.  We see change as something we can manipulate.  What is of our own making is the action taken to support (or not support) inevitable change.

The world including America has long been in a process of ripening, in which the seeds of liberation were first cultivated long before our own birth.   Each seed ripens in its own time.  Each seed is of a different variety and sometimes we cannot tell what will come forth.  We have cultivated the seeds of this election with our own visions and actions until ripening occurred, until transformation presented itself in a sense of sweet victory.  In his book, Transformation at the Base (Parallax Press), Thich Nhat Hanh says the ripening process is when a green sour orange ripens into a sweet one.  When our actions ripen we see the fruit.

In electing a president in this country, whose skin tone matches the descendants of slaves in this country, is to witness the seed ripening of our collective consciousness.  The change was coming (and is still coming) and we can make a choice, if we have the capacity, to renew ourselves in the moment of change.  Or will we turn away?

Some will turn away to the change of having a president who says he believes in the interrelationship of everyone.  Some will attempt to ripen unwholesome seeds that also exist in our collective consciousness.  Therefore, the quality of our being in the present depends upon the quality our wholehearted actions.  This is not the time to sit back and say we have completed our tasks.  If you talk to anyone involved in the work of freedom they will tell you the work is never done.

Perhaps we can begin the work of healing, reconciliation, and peacemaking.  Perhaps we can restore a kinship that was once burned down by misconceptions.  Perhaps we can unmask the heart that already knows we of one and of each other.  These are the seeds to pass onto the next generation.

Congratulations President Elect Obama and to all those who worked hard on his campaign!!!