What Would the Buddha Buy?

Avoid the “shopocalypse” by taking a Zen approach to the holiday season.

San Francisco, CA (USA) -- What would the Buddha buy? Not too much, not too little. Picture him with his own reusable grocery bag slung over his shoulder, talking to a shopper about making mindful choices: “Do you really need it?” “Where does it come from?” “How will it affect the environment when you’re done?” He might have enjoyed celebrating International Buy Nothing Day on November 29 as a spiritual retreat from frantic holiday shopping (the “shopocalypse,” as Reverend Billy calls it). 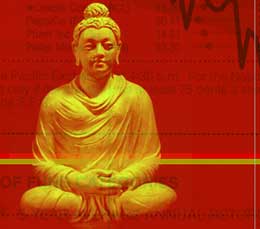 Recall how the Buddha’s monasteries served as a kind of buffer zone between the ancient traditions of agrarian culture and the fierce competition of the newly emerging market economy. These days engaged Buddhist sanghas play a similar role. They believe that we are again at a turning point – a new Axial Age, an opportunity to turn the Wheel of Dharma.

Without pie charts, sustainability statistics or solemn computation of your ecological footprint, Gandhi said it all: “There is enough for human need, not for human greed.” And as for greed – sad and sorry, mindless, addicted, grasping greed – the Buddha knows it beckons us with all its tempting lures.

The Buddha’s critique of mindless craving and needless suffering pinpoints the precise moment during which real pleasure becomes abstract desire – the want to want. In our addictive culture of capitalism, it’s the exact same vital acupressure point that our basic market economy capitalizes on. “Don’t get hooked,” the Buddha says. Remember the hungry ghost, craving more and more of what can never satisfy.

With Dharma, a marketplace can be seen as an opportunity to practice mindfulness, rather than mindless consumption. Nothing exotic – we do it every day. In each advertisement and at each potential point of purchase is a karmic choice, the opportunity to practice wise compassion for the universal human condition. The bodhisattva shopper vows to consider all beings.

Neither capitalism nor socialism has prevented children from starving in Somalia. We should be trying to base contentment on being, rather than having. Then the question of buying that fourth shirt or that new gizmo on display might be dwarfed by the prospect of creating more space in one’s life by donating your extra stuff.

When tempted to bite the hook of despair over seeming scarcity in one’s life or in the world, try practicing generosity instead. It’s harder to be grasping greedily when your arms are extended in giving. Reverend Billy energizes us with this (free) motto: love is a gift economy. Pass it along.

------------
Gary Gach, author of  The Complete Idiot's Guide to Understanding Buddhism is a member of the International Panel of Advisers for the Buddhist Channel.