Colombo, Sri Lanka -- The Buddhist view of globalization is very different from what the contemporary Western scholars profess it to be. 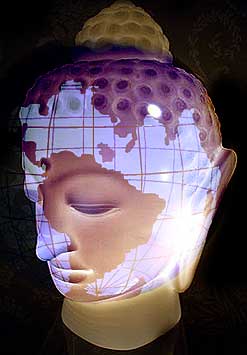 When the current debate on globalization began in the 1960s, the Western oligopoly of social science journals treated it as a new development. Heavily influenced by the works of sociologists like Max Weber and philosophers like Friedrich Hegel, the scholars who wrote to these journals and wrote ‘authoritative’ books were oblivious to the perspectives of Eastern thought or debunked them as metaphysics.

These Eurocentric scholars did not realize they were re-inventing the wheel when they ‘discovered’ globalization as a new topic for investigation. Among them, the Orientalists wanted to uphold Western thought and put down the non-Western while the others were only marginally ‘educated’ on non-Western thought, They were unable to separate Buddha’s own philosophy from the populist traditions of Buddhist ‘religion.’ Therefore, they rarely analyzed the Buddha’s teachings as a source for social science.

The movement toward postdisciplinarity—the simultaneous investigation of issues from all disciplinary angles—has called on scholars, as well as journalists, to look at the cosmos/world as a ‘cooperative.’ Our globe is a cooperative network within the hierarchical level of planetary systems located below the hierarchical level of galaxies. Although Buddhist metaphysics (ontocosmology) recognizes these hierarchies, which affect the operation of one another, Buddha’s primary concern was to explain samsara (cycle of becoming) in terms of the three features of existence—dhukka, anatta, and anicca—that encompassed all living beings, not just the human species.

Second, Buddhism sees globalization as an integral component of the doctrine of anicca (impermanence/change). Globalization is an ongoing dynamic process, which occurs as a result of the mutual interconnection, interaction, and interdependence of all global/universal elements with one another. This mutual causality is the reason for anicca. Concepts such as permanence, independence and autonomy are supreme myths although a case can be made to recognize the relative speed of change of different types of elements. The proclivity of Western empiricist scholars to predict outcomes based on linear relationships between so-called independent and dependent variables has produced tomes of worthless data. Darwin’s theory of evolution was another re-invention of the wheel because the Buddhist theory of anicca already contained the rudiments of evolutionary theory.

Third, the Buddhist theory of globalization connotes every dimension of the biosphere, not just what Sheila Croucher describes as "a cluster of related changes [not limited to economic, technological, cultural, and political realms] that are increasing the interconnectedness of the world." Modern physics attests that electro-magnetism, gravity, and strong and weak forces interconnect everything and everyone in the world/universe we inhabit. In contrast, the contemporary (Western) theory of globalization is highly anthropocentric because it looks at ‘increasing interconnectedness’ of the human species alone. Because the Buddhist definition of society includes all living beings, it places supreme importance on dealing with environmental concerns. Thus, Buddhism endorses the study of how human activities could interfere with resident bird migration patterns over long geographical distances. Because more than 7,200 animal species and 8,300 plant species are currently threatened with extinction, the Buddhist approach to globalization will enable us to detect their deleterious effects globally. One might even argue that some species of birds have been more ‘globalized’ than the human species.

Fourth, the Buddhist view of globalization reflects the co-arising operational mechanism of dhukka (unsatisfactoriness) and anatta (no-selfness/ interdependence). These two features of existence co-evolve with their counterpart anicca (impermanence/ change) to form the ti-lakkhana (three features of exixtence). Their mutual interaction could engender an unjust or a just society or something in-between. The 12 conditional factors—craving, grasping, contact, feeling, senses, ignorance, volitional formations, becoming, birth, decay-and death, and name-and form—entice living beings to hang on to various forms of matter/energy and information, which make up the entire world/universe. One indicator of this is ceaseless accumulation in capitalist systems and the immeasurable unsatisfactoriness it creates through cyclical recessions and depressions. Because of anicca, it is impossible for living beings to grasp on to what they crave. The result is dukkha. Moreover, because everything and everyone is interconnected and interdependent, all represent anatta (no-self)—another reason that engenders unsatisfactoriness.

Finally, one can surmise that the Buddhist concept of globalization is the equivalent of samsara (cycle of becoming) at a given point in time. The ultimate result of the interaction of all elements in the global/universal system is the reproduction of that system with varying degrees of ongoing minor changes and cyclical major changes. Samsara is nothing but the interconnected/ interdependent world/universe wherein all its constituent elements bar two go through the cycle of birth, growth, and death. The exceptions are matter/energy and consciousness, which have co-existed, co-exist, and will co-exist for ever. Once a universe itself has gone through the cycles of birth, evolution, and death, these two elements remain in pure potentiality ready to give birth to another cyclic universe.