A Buddhist perspective on the apocalypse

Los Angeles, USA -- I was recently asked to contribute to a local examiner's blog on the Christian teaching of the apocalypse, and to give the Buddhist perspective. Because it involves Kalachakra and the topic of world peace, I've posted my responses here for my readers. 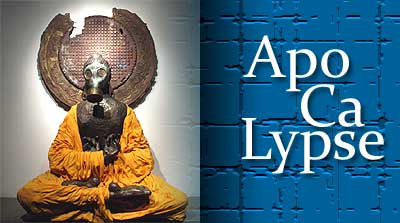 The posting was published on Wyatt Shev's blog. See below for a link to his site.

What is your religion's classical interpretation (if any) of the Apocalypse?

As Buddhism is not based on the Bible but instead on Buddhist Sutra, there are no Buddhist teachings of the Christian apocalypse. However, one Buddhist text, the Kalachakra tantra (also known as the wheel of time), does predict a future war that will end as a golden age begins. Today Buddhists interpret that texts like this, as well as those that describe cosmology, as figurative rather than literal.

What is notable in the Kalachakra tantra is it’s instructions on how to prevent war. For this reason, Kalachakra has become more associated with world peace than doomsday prophecy. The author of the text, King Manjushri-yashas, advised that war could be avoided entirely by sharing technology. By sharing the achievements of a culture, a society can turn invading forces from barbarism without resorting to battle. If they come to see the advantages of living in a more civilized way, and have access to the advantages society gives, they can easier shed violence. This definitely has relevance today, as higher education and the ability for self improvement have been shown to increase prosperity and lower crime.

Secondly, King Manjushri-yashas called his people to face the terrorism and violence with ethical solidarity. He reminded them that each religion teaches basic moral principles and called them to return to the pure teachings of their own religions. Then, he told them to examine their customs and those of the barbarians: if they found them similar, then future generations would be more likely to accept barbarian rule. In other words, if we use violence to deal with threats, we aren’t different from the ones perpetrating violence. Instead, we must find peaceful solutions.

Historic commentaries on the Kalachakra emphasize that war must be understood on two levels: as invasions by external forces, and attacks by internal disturbing emotions and attitudes, caused by confusion about reality. The weapons and forces that King Manjushri-yashas said are needed for victory are symbols of realizations gained from spiritual practice, such as compassion, freedom from delusion, and such.

Some notable differences in the predictions:

How do you believe this particular interpretation fits into the events that currently shape our world? Do you believe we are now living in the End of Days?

No, I don’t. Many people are suffering, but there have always been these problems in the world. It is a condition of life, called samsara, and isn’t going to change anytime soon. The fact that there is evil in the world, that there is pain, famine, war and disease doesn’t mean that an apocalypse is coming. It means we are the same as humans have always been. This is the way things are on Earth.

This doesn’t mean we should resign to terrible things when they happen. The fact that we have been raised in a society that taught us how to think, read, use and invent technology; that taught us the ideals of charity, the golden rule, ethics, and law, gives us a high responsibility to those less fortunate. We can empathize with the suffering of others and do what we can to help them. And if everyone did that instead of envisioning the world in ruin perhaps things would start to seem less apocalyptic.

Or perhaps the apocalypse happens on the individual scale. You hit the bottom, so to say, and have an awakening that brings God fully into your life, and makes you a channel of his love and peace.

Do you (even slightly) believe in any of the myriad theories suggesting a 2012 apocalyptic event? If so, how do they integrate within the dogmatic structure of your faith?

Absolutely not. Prophesy, predicting the future, and superstition all fall into the same boat. If you had some superpower to see the future, any use of it that doesn’t include serving your fellow man—truly serving them (curing disease, giving food and water, bringing peace, kindness and compassion) and not following some agenda—is a tad self serving, don’t you think? Why not see how to solve the problems, rather than destroy our one beautiful pearl of a planet, and our one sacred and precious life?

In Buddhism, this sense of urgency is paralleled with the teaching of the precious human life. We have limited time, and an ideal situation for spiritual practice in this lifetime. Whether the reason is a coming apocalypse or the fact that life is fragile and any of us could die at any moment, the end result is the same: we’ve got to get our spiritual lives together, now. There’s no time to delay.