The importance of the Dalai Lama's Taiwan visit

Taipei, Taiwan -- The Dalai Lama, the spiritual head of the Tibetans travelled directly from the mountains of Ladakh, where he had been giving Buddhist teachings to local people and Tibetans for the past two weeks, to another Buddhist region, the Republic of China, as Taiwan is known. 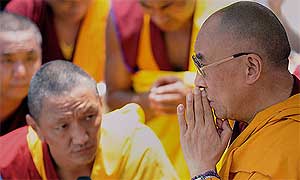 << The Dalai Lama arrives in Taiwan for a six-day visit, angering China.

The official reason for the visit is to pray for the victims of the typhoon Morakot which hit the coasts of Taiwan on August 8 and claimed some 700 lives. The leaders of seven municipalities touched by Morakot (all belonging to the opposition DPP or Democratic Progressive Party) invited the Tibetan leader to visit the island to console the survivors and pray for the souls of the departed.

Their invitation has put President Ma Ying-jeou in a tight spot, especially after he was heavily criticised for his poor handling of the aftermath of the deadly storm. Ma's problem is that he had made it a priority for his government to establish more convivial relations with the opposite side of the Straits; the visit of the Buddhist leader comes truly at a wrong time.

However, he had little choice but to accept to the proposed visit in view of his extremely low ratings in opinion polls (below 20 per cent). Probably against his better convictions, Ma had to declare: 'The Dalai Lama could come to Taiwan to help rest the souls of the dead and also pray for the well-being of the survivors.'

The Dalai Lama had visited the island in March 1997 and April 2001 during the DPP's rule when a more independent policy towards the Mainland was advocated.

A few days before his first visit to Taipei in 1997, I had the privilege to interview the Tibetan leader. At that time, he had spoken about his motivations: 'My main purpose is to show to every Chinese that we are not anti-Chinese. This is Number One.'

'This is a signal for the Chinese Communists in Beijing [ Images ],' he added. His main argument was: 'Our image (with the Chinese people) will improve; the impression of millions of overseas Chinese and eventually in the Chinese Mainland will be different.' He thought that ordinary Chinese would then realise that he was able to have friendly relations with Chinese people.

This might still be one of his motivations for accepting the present invitation at very short notice, but there is more.

During his stay in Ladakh, he said that he had hoped for a change in Beijing's Tibet [ Images ] policy after last year's unrest on the plateau: 'Last year's protests were not just in the Tibet Autonomous Region, but also in the Tibetan areas of Qinghai, Yunnan, Gansu and Sichuan. So I really was hopeful that China would adopt a more realistic approach,' he told Voice of Tibet radio.

He hoped that the Chinese leadership would have looked at the 'real' situation in Tibet: 'But that did not happen. Instead, they resorted to violent measures of crackdown on the Tibetans.'

In November 2008, the Dalai Lama called for a General Meeting to ascertain the opinion of the Tibetans on the future of the negotiations with Beijing (which had not really taken off). At that time a majority said they were ready to follow the Tibetan leader in his Middle Path approach.

It, however, appears that the Dalai Lama now tries another strategy: as the present authoritarian regime in Beijing has not shown any signs 'understanding and far-sightedness,' as he put it after the July incidents in Xinjiang, he has begun to enlarge his personal contacts with the people of China.

The bloody incidents in Urumqi have probably strengthened the Tibetan leader' opinion that it was the right way for the present.

In this context, a first Sino-Tibetan Conference called 'Finding Common Ground' was organised between August 6 and 9, 2009 in Geneva. In his address, the Dalai Lama pleaded with the Chinese participants: 'I seek your advice and frank opinions on what steps to take in future to solve the Tibetan problem. Secondly, I request your help in carrying a message to the Chinese people that we Tibetans harbour no hatred against our Chinese brothers and sisters, and that we Tibetans are neither anti-Chinese nor anti-China.'

e said that he did not want 'the issue of Tibet being turned into an issue of racial prejudice and antagonism between the Tibetan and Chinese peoples.'

After the conference, attended by Chinese and Tibetan scholars, educators, writers and human rights advocates, the participants issued a 'final document' which stated: 'The aims of the conference are to inform the Chinese people and the international community that Tibetan culture and way of life are gravely endangered.'

The conclusions of the conference were hopeful: 'Tibetan culture is a precious treasure among the many cultures of humanity. Without freedom for Tibet, there will be no freedom for China. The extinction of Tibetan culture would not only be a tragedy for the Tibetan people, but would be a disgrace for the Chinese people and an irreplaceable loss for the whole of humanity.'

This statement must have been welcomed by the Dalai Lama. But will this new strategy work better than the previous one?

The Dalai Lama has repeatedly made his point: He has no problem with the people of China; the difficulties are only with the present regime. However as long as the Chinese Communist Party remains in power in the Forbidden City, nothing seems able to move forward, whether it is in Tibet, in Xinjiang or in China. It is not that the Beijing bosses are not trying to change their poor image.

At the end of his recent four-day tour of Xinjiang, President Hu Jintao declared that a directive has been issued by his government 'to make studies in ethnic harmony compulsory for high school students sitting the national college entrance exams.'

But for the local 'minorities' or 'nationalities,' it is only one more gimmick as it does not translate into more autonomy for the regions.

Vice-President Xi Jinping and Vice Premier Li Keqiang also went on tour in two other 'minority' regions, the Inner Mongolia Autonomous Region and the Qinghai province respectively. During his trip to Inner Mongolia, Xi asked the local cadres to promote education on patriotism. Does he realise that for the 'minorities,' patriotism has no meaning?

Despite these professions of faith from Beijing, the problem may remain as long as the Party keeps its firm grip on the 'nationalities' affairs. The only foreseeable change is a change inside China.

Interestingly, a report prepared by a Chinese think-tank, Open Constitution Initiative or Beijing Gongmeng Consulting on the 2008 riots in Tibet is an eye-opener. It entirely contradicts the party's official version. The authors are lawyers 'committed to building a modernised China and promoting human rights, democracy, and rule of law in China.'

Their research team spent one month in Tibet 'interviewing Tibetan monks, nomads, farmers, scholars, migrants, artists, and business people.' Their objective was to come into personal contact with voices which can give 'a clear and objective outline of ordinary people's living conditions in Tibetan areas.'

The final conclusions are not far from the Tibetan Diaspora's views: 'Earnestly listen to the voices of ordinary Tibetans and on the basis of respecting and protecting each of the Tibetan people's rights and interests.'

A similar conclusion was arrived at in the 70,000 character petition sent by the previous Panchen Lama to Premier Zhou Enlai in 1962, for which the former spent 17 years in jail.

In Ladakh, the Dalai Lama said he had heard about 680 articles and essays in Chinese language on the Internet supporting the Tibetan people, and often criticising the Chinese government's policies in Tibet.

The problem is that Hu and his colleagues' speeches on 'ethic harmony' do not translate into reality. For example Xu Zhiyong, one of the founders of the Beijing Gongmeng has been arrested in early August and though he has since then been released on 'bail,' he will probably not be able to continue to do his work on human rights and other 'hot' topics like Tibet. He is under official 'surveillance.'

The Dalai Lama is right to reach out to 'ordinary Chinese;' in the long run, it could only pay rich dividends, but the results won't probably be seen in the immediate future.

His visit in Taiwan should be seen in this perspective.

When the presidential spokesman Wang Yu-chi declared that the Dalai Lama's visit would be strictly religious, with no political overtones, he was entirely right, but religion and politics are often not far apart in Asia.