Colombo, Sri Lanka -- It is time that right thinking people and animal welfare societies take a strong stand against the establishment and maintenance of Zoos. 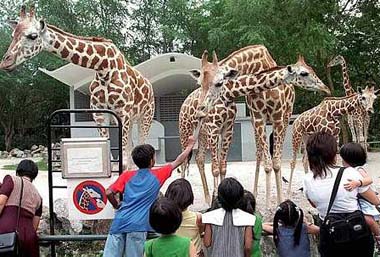 In today's world with so many modern gadgetry available such as computers, videos, internet, broadband, Youtube, and the like, there is no justification for keeping animals incarcerated in cages and small enclosures for the rest of their lives in Zoos maintained purely for the benefit and pleasure of human beings.

Animals are made to serve a life sentence in miserable conditions in zoos without having committed a crime. Had any human being been placed in that situation he or she would become a cause célèbre around the world. We price the freedom of fellow humans and disregard the claims for freedom of other sentient beings.

Animals are sentient beings and like humans they too would like to have their freedom to roam in the fields, jungles etc. without restrictions. Zoos deny them this freedom.

It is man's inhumanity and insensitivity towards other living beings that makes some people perpetrate abusive conduct  and the rest of us (with exceptions) to look the other side.

Society everywhere needs strong moral voices like Mahatma Gandhi who became the moral conscience of India and much of the world during his day.

In the time of the Buddha and Mahavira (circa 500 BC) animal sacrifice was a widespread practice. It was virtually a mandatory exercise for anyone wanting to curry favour with the 'gods'. The practice had the blessings of Kings but that did not prevent the Buddha from speaking out against this morally indefensible practice.

The principle of ‘Ahimsa ’ developed in India in the wake of the opposition raised against animal sacrifice by both the Buddha and Mahavira ( the founder of Jainism ). The Buddha whose gentle disposition was offended by the unnecessary cruelty performed on the altars of the gods, visited the priests officiating in the temples, and made the following remarks:

“Ignorance only can make these men prepare festivals and hold vast meetings for sacrifices. Far better to revere the truth than try to appease the gods by shedding blood.

“What love can a man possess who believes that the destruction of life alone will atone for evil deeds? Can a new wrong expiate old wrongs? And can the slaughter of an innocent victim blot out the evil deeds of mankind? This is practising religion by the neglect of moral conduct.

“Purify your hearts and cease to kill; that is true religion.

“Rituals have no efficacy; prayers are vain repetitions; and incantations have no saving power. But to abandon covetousness and lust, to become free from evil passions, and to give up all hatred and ill will, that is the right sacrifice and the true worship. ”

As much as these were voices raised against animal sacrifice (these sentiments are valid even today), we need fearless moral voices raised against the incarceration of animals in caged enclosures  in Zoos (or under whatever  name) purely for no other reason than for the pleasure of visitors i.e. human beings. Many of these animals suffer trauma and are pathologically mentally unsound being deprived of their freedom and scope for natural behavior.

In pre-colonial Sri Lanka, according to Mahawamsa and other historical chronicles, our Buddhist Kings established wildlife sanctuaries for animals placing the interest of animals as the paramount consideration. Peaceful co –existence between man and animal was cherished and promoted. Innumerable epigraphical records from the Anuradhapura and Polonnaruwa periods of our history constitute testimony of state interest in the welfare of animals.

‘Kill and Eat‘  was never sanctioned as a guiding principle.  It is not a Buddhist tenet. Chulavamsa records several instances of our Kings taking pride in feeding animals, sometimes establishing hospitals for animals and thereby establishing a high ethical standard of behavior for their subjects. There is no record of Zoos being established to keep caged animals as a matter of public policy by our former Kings except in one or two instances. This is a unique historical achievement and cause for pride for Sri Lanka even in the international arena.

It is time that Sri Lanka reverts back to the ancient practice of giving freedom to animals respecting their sentience and caring for them rather than imprisoning them in Zoos, a practice which we have acquired from our former colonial masters and now find ourselves incapable of freeing ourselves from it.