Japanese nun looks back on life of love

Kyoto, Japan -- Jakucho Setouchi, an 84-year-old Japanese Buddhist nun and novelist, has won a number of literature awards -- most recently the Emperor's Order of Culture. While she is best known for her translation of the ancient love story "The Tale of Genji" into modern speech, her popularity as an author derives from her vivid and sometimes explicit descriptions of love, which once provoked uproar in Japan's conservative and male-dominated literary circles. 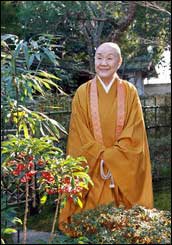 << Jakucho Setouchi, an 84-year-old Japanese Buddhist nun and novelist, who won a number of literature awards, smiles as she poses in the garden of her residence in Kyoto, western Japan, 10 January 2007. Setouchi, also an anti-war activist and one of Japan's best-known religious figures, told about her life as a woman and as a Buddhism and as her belief in love for love's sake. © 2007 AFP - Yoshikazu Tsuno

Setouchi, who is also an anti-war activist and one of the country's best-known religious figures, tells Tokyo correspondent Harumi Ozawa about her life as a woman and as a Buddhist, and talks candidly about her belief in love for love's sake.

When Jakucho Setouchi strolls through the streets of the ancient Japanese city of Kyoto, her shaved head and flowing robes marking her out as a Buddhist nun, high school girls cheerfully call her "Jakky" and fans trail in her wake.

Thousands attend her sermons, and some people become so emotional that, putting aside traditional Japanese reserve, they publicly sob.

At 84, Setouchi is one of Japan's best-known religious leaders yet some of her life's most defining experiences have been love affairs.

A novelist who did not take her vows until she was in her fifties, Setouchi has also had a dazzling literary career, and was recently awarded the prestigious Order of Culture by Emperor Akihito.

"I thought they could have given it to me a bit earlier, to be honest," she said with a chuckle during an interview at her Kyoto temple.

Becoming serious once more, she says: "I never expected I would receive the award. Most of my works' themes are against the establishment, including the imperial system."

The Order of Culture recognised not only her novels but also her broad cultural contributions such as translating into modern Japanese the 11th century love story, "The Tale of Genji," Japan's, and some say the world's, first novel.

But Setouchi was once an outcast from literary circles and endured being labelled a pornographer.

As Harumi Setouchi -- decades before becoming a nun and taking the Buddhist name Jakucho -- she described sex from the perspective and with the voice of a woman.

Her freewheeling private life, about which she has written in some of her books, involved affairs with a young lover and a years-long relationship with a married man, which also brought her scorn.

Nevertheless, her prodigious output eventually forced the public to embrace her as the country's top-ranking novelist.

"Times have changed," she said of the emperor's award. "The authorities can no longer ignore diversity in ideas and thought. I accepted the award for women who will follow the same path in life as me."

She remembers her father as "a very understanding man" when it came to her own activities, but says that when he became ill, he was too concerned with her controversial reputation to allow her to come home during daylight.

"He said it would be embarrassing for the neighbours if I came back," she said, explaining that "when I left home, abandoning my husband and child, I was damned as a scoundrel".

By the time she was 25, Setouchi was a typical wife and mother of a three-year-old daughter until she fell in love with a younger man, an experience she chronicled in her autobiographical novel "Basho" ("Places").

The affair led her to leave her husband and daughter -- with no money and a patch on her eye thanks to her husband's violent reaction to her affair.

The trauma of that experience kick-started her literary career.

"I have kept saying women must stand on their own economically when they seek equality with men," she said in the interview. "That is the single message I have sent to women throughout my career.

"As long as they are independent financially, they can keep their child, which I couldn't when I left my house."

By the time she was in her early 30s, Setouchi had gained recognition as a novelist with "Joshidaisei Qu Ailing" ("Female College Student Qu Ailing"), a story about a free-spirited young Chinese woman, for which she won her first literary prize.

Soon afterward she published "Kashin" ("Centre of a Flower"), a title that can also be interpreted as "womb".

"I was very excited about releasing the book. So I was shocked and flabbergasted when I saw the advertisement copy," she said.

"Kashin," about a woman who abandons her husband and child for unconventional love affairs and becomes a prostitute, was advertised as the maiden book of a "writer who thinks with her womb".

With explicit descriptions of sex written by a woman, "Kashin" caused a scandal in the literary circles of the time, and provoked a slew of criticism.

Young and passionate, Setouchi fought back, publishing a stinging rebuttal in which she called her critics "impotent" and said their wives must be "frigid".

"Then I was thrown out," Setouchi laughed, referring to the fact that she was shunned by the publishing industry for the next five years.

"They got furious maybe because my speculation was true," she says cheekily.

Her comeback books were "Tamura Toshiko" ("Toshiko Tamura"), the biography of an earlier female author, and "Natsu no Owari ("The End of Summer") based on her own eight-year affair with a married man.

-- Pursuing "something greater" in Buddhism --

When, at the age of 51 in 1973, she had reached the apex of her popularity as a novelist, Setouchi shaved her head, took the Buddhist vows and chose a simpler path through life.

Curious fans still ask her why -- a question that has become so frequent she finds it irritating.

She answers simply that her decision was based on her pursuit of "something greater".

"I entered the clergy not because I wanted to renounce this world. It's not that I got tired of relationships with men," she said.

"Until immediately before I became a nun, I was involved with men, a couple of them. But even if I had a job, even if I had men, I felt life was empty. I wanted to pursue something else."

She said she has kept the nun's commandment of not engaging in love affairs, despite her earlier reputation as a woman never free from romantic gossip.

But in her sermons Setouchi has unreservedly urged people to be passionate in their love affairs -- one of the main reasons for her popularity.

"The meaning of life is to love someone -- or not just that, to get besotted with someone," she said. "You come into life alone and die alone anyway."

Setouchi herself has sought greater heights not only as a novelist but also a humanitarian.

Her campaigns have included a hunger strike protesting the US bombing of Afghanistan in 2001, trips to Iraq to provide medical kits to children and to protest Japan's deployment of troops to Iraq, and capital punishment.

Setouchi exchanges letters with inmates on death row, most notably Hiroko Nagata, a former leader of the leftist Red Army who was sentenced to death for the killing of some 12 members of the gorup in the early 1970s.

"Killing fellow members like that was wrong no matter what," Setouchi said.

But, she added, she always asks herself: "What if I had been young like her at that time?"

She wondered aloud what she would have done in 1911, when socialist Sugako Kanno -- whose biography she has written -- was executed for trying to assassinate the emperor.

"They all wanted was to make the country, and the world, a better place," Setouchi said. Nagata and Kanno had acted "not for their greed," she said. "They had passion for their ideal world. I feel sympathetic towards people like them."

Setouchi, who lost her mother and grandfather in US bombings near the end of World War II, often urges her fellow Japanese to exercise their imagination when looking at where their nation is heading.

She said she felt fear after Prime Minister Shinzo Abe created a full-fledged defence ministry in January. The conservative premier has also pledged to rewrite the pacifist constitution, which was imposed by the United States after Japan's World War II surrender.

"That could open a path for Japan to go into a war eventually and resume military drafting," she said. "I don't want to see that happen again, at least while I'm still alive."

Setouchi is now working on a new novel, in which she tries to get into the inner struggle of Zeami, an actor, playwright and critic of the 14th and 15th centuries who established the "Noh" classical theatrical art.

She said she was impressed by a remark made by Zeami: People die but art lives forever.

Despite his own miserable circumstances -- Zeami was banished to a remote island when his patron was replaced by a new shogun -- the medieval dramatist believed art was an eternal vehicle for conveying human compassion.

"We human beings are so foolish and insensitive that we cannot feel anything until we experience it," Setouchi said.

"Unless you go through real heartbreak, you cannot understand the agony that drives you crazy. That is why we have art," she said.

"You have to read and train your imagination, and learn to feel compassion for other people."