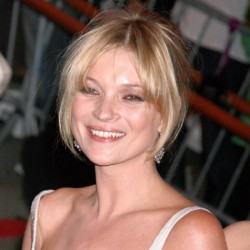 The supermodel - famed for her wild partying - is reportedly showing an increasing interest in the religion and has started meditating in a bid to gain a sense of calm.

A source said: 'She's really into Buddhism and has a bought a bronze Buddha. The 4ft by 2ft statue has pride of place in her living room.

'Kate wants to de-stress and is enjoying taking time out to meditate and learn about Buddhism. She finds it calming.'

The British beauty is keen for her friends to share her new interest but is not having the response she hoped for.

The source added to Britain's Daily Mirror newspaper: 'She lights sandalwood incense sticks in front of the statue and makes her friends do the same. The problem is that everyone just sits choking on the fumes.'

Those close to Kate - who has a six-year-old daughter Lila Grace - are said to be hoping Buddhism can help curb her wild ways.

A source revealed: 'Philip told her straight she's partying too hard. He told her she needs to look after herself for her own good and warned she's ruining her looks with the alcohol.

'He won't take any nonsense - he's said if she lets her partying spiral out of control she'll end up back in rehab and she's old enough to know better.'