Tokyo, Japan -- When the Zen monk Dogen Zenji returned to Japan from China in 1227 with the ideas that would become the Soto school of Zen, could he have imagined that centuries later, on the other side of the world, those very ideas would be used by people to try to overcome their society's deeply rooted conflict? Most likely not, but that is exactly what is happening. 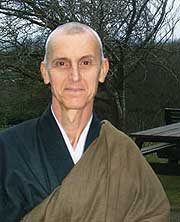 In Northern Ireland, which is primarily known in Japan as a place of violent, religious conflict, small Soto Zen groups have been formed and are flourishing.

The people behind this unlikely development began by bringing together former combatants from the two conflicting groups, the Irish-Catholic and British-Protestant communities, and using Dogen Zenji's ideas to help them overcome their differences. To tell the story of how this came about it would be best to tell the story of the man who started it all — Irishman Paul Haller Roshi.

Haller is the abbot of the San Francisco Zen Center, but he spends his time between San Francisco and Ireland, working with the Zen groups he helped establish and overseeing their peace-building work.

Originally from the Falls Road area of Belfast, he witnessed his society collapse into bitter sectarian conflict as a young engineering student in the late 1960s.

The Catholic Falls Road area became the cradle of the Irish Republican Army's campaign of violence aimed at securing independence from Britain.

In 1969, Paul Haller joined the legions of young people who left Northern Ireland looking to escape the conflict, find a better life or just explore the world. He first moved to London and then traveled through Europe, the Middle East and Asia, before ending up in Tokyo.

In an interview from the San Francisco Zen Center he reflected on his early travels, "I was very religious as a child and my travels really engaged my interest in religion, from the various Christian faiths, the Koran to Buddhism."

In Tokyo, he began to focus his attention on Zen Buddhism. "I had read Alan Watts' book, "The Way of Zen," among others, and I wanted to study more. I met a young student Soto Zen monk in Tokyo, whose father was a Soto Zen monk, and we used to talk about Zen a lot, but in order for me to study Zen formally in Japan, I needed a letter of recommendation from a teacher, which I didn't have."

Determined to continue his Zen studies, Paul went to Thailand where he didn't need such a letter. In Chiang Mai in northern Thailand he entered a monastery and studied under Buddha Dasa, a famous Thai teacher at that time.

He then moved to a remote meditation center in a forest nearer to Bangkok where he spent months immersed in meditation and seclusion.

"My time in Thailand was a time of great personal questioning, but the time spent in the meditation center was very beneficial for me. It was my first experience of intensive meditation." Soon afterward, he was ordained as a Zen Buddhist monk in Bangkok. It was 1973.

"My time in Thailand had been very good for me, but I wanted to practice Zen in a Western society."

"Soon after being ordained, I met a young American-Thai monk who suggested that I make the journey to San Francisco, to join the Zen center established by the famous Japanese Zen monk Shunryu Suzuki, which I did."

Paul settled in San Francisco and stayed at the Zen center, in time becoming a co-abbot.

Twenty years later, major moves toward peace in Northern Ireland's long, drawn-out conflict were being made. Against this background Paul's close friend and Zen practitioner, the movie actor Michael O'Keefe ("Caddyshack," "Michael Clayton") suggested to Paul that Soto Zen might have something to offer a society emerging from decades of sectarian violence.

Paul agreed and soon arrangements were made. A group went to Belfast with plans for a retreat that would include ex-combatants to see if they could be helped to overcome the suffering they had endured during the conflict.

"Initially, 25 of us traveled from the U.S. for the early work. We held the retreat in Belfast itself and we had people who had fought on both sides come together.

"We asked them how they had suffered, because the basic teaching of Buddha is to address suffering. There we had people who had once been mortal enemies, many of whom still didn't want to be in the same room together.

"But they listened to each other's stories of how they had suffered and they came to empathize with each other. We saw real progress being made then."

At the time, Haller said, many people and groups from around the world converged on Belfast to offer their "cure" to Northern Ireland's ills.

"People were coming in for a short time, undertaking some sort of peace activity and then leaving again," he said, "But I wanted to establish a center which could work with people's long-term development and sensibilities."

Therefore, a Zen meditation group was formed, with its membership drawn from both of the conflicting communities. Within a short while, permanent premises in the center of Belfast were secured and the new Black Mountain Zen Centre became Northern Ireland's first Soto Zen group.

Now, Paul tells us, it has a flourishing membership and schedule. There are regular peace-building workshops dealing with trauma and stress reduction.

Local community workers are involved in much of this work. Bi-annual Zen meditation retreats are held out of the city in the Irish countryside, and are often attended by as many as 50 people. Now another five new Zen groups have formed in towns around Belfast.

"Those groups in Northern Ireland that strongly and simply align themselves with Soto Zen do so because they see it as a method of meditation, as was taught by Dogen Zenji, rather than a religion," Paul said.

"They don't see themselves as adhering to a church or religion, whereas in Japan it has more of a religious identity, of course noting the difference in Western and Japanese understandings of the term 'religion.' Meditation is the most important thing about Soto Zen to them, not funeral rites."

"The heart of Dogen Zenji's teachings is relevant to any society at any time and that is what I attempted to bring to Northern Ireland. Through Dogen's method of meditation, to practice awareness and live in the moment is to discover what Shakyamuni Buddha was teaching and to discover for yourself the way of life that he proposed."