The Monk in Command

Yamgon, Myanmar -- Chit Thu, the military commander of the Democratic Karen Buddhist Army (DKBA), recently held a grand party at his modern 40-room residence in Myawaddy, from which he controls a lucrative cross-border trade. He has a close relationship with the Burmese army, and his troops serve the regime as a proxy army which fights the Karen National Liberation Army (KNLA). 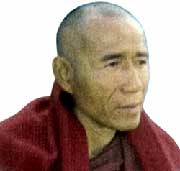 Unknown to most Westerners is that a Buddhist monk, U Thuzana, 67, weilds equal or even greater power within the DKBA. He is credited with making the recent DKBA decision to reject the regime’s border guard force order.

According to some, U Thuzana is the most powerful person in the DKBA. It is difficult for officers and soldiers not to follow his decisions because of his role in the creation of the DKBA, one of the junta’s closest allies.

His close followers praise his spiritual charisma. He is both a spiritual and political force which can easily match—and sometimes counter—the power wielded by the wealthy DKBA officers, who have benefited lavishly through their association with the junta and cross-border trade.

To many Karen, military commander Chit Thu is one more version of the former generation of Karen warlords, while U Thuzana is the answer to the Karen quest for a moral leader who places peace, well-being and future prosperity above politics. His support is based on Karen traditional leadership, nationalism and modern development, as well as traditional Buddhist moral leadership.

Many Karen, including Christians, see him as a potential bridge to peace and reconciliation between the DKBA, which is primarily Buddhist and controls a large part of Karen State, and the Karen National Union (KNU), the KNLA’s political wing, which is made up primarily of Christians. The two groups separated in 1994 after a bitter dispute involving religion, discrimination and other issues.

Any rapprochement between the two Karen armies would benefit the region, particularly the internally displaced persons and refugees along the border, in addition to making it easier for humanitarian groups to work there.

U Thuzana is a Pwo Karen from Hlaingbwe in Karen State. As a young man, he served as a KNLA soldier, acting as a courier. At age 20, he became a monk and began a long career of renovating pagodas in the region. He said his goal was to revive Buddhism and to create a zone of peace and prosperity. Later, he became a wandering forest monk and on his journey he came to the Myaing Gyi Ngu hill on the eastern bank of the Salween River, not far from Kamamaung town, where he met a yathey, a hermit who practiced astrology and magic.

U Thuzana decided to stay on the hill near a pagoda ruin. He was supported by local villagers but suffered from illness and had symptoms of TB. He fasted and meditated for 49 days on the hill, where he overcame his illness and later built his first pagoda. During the following 20 years, he is said to have renovated more than 70 pagodas. He prophesized that peace would come to the Karen when 50 white pagodas had been constructed.

His ascetic life drew many followers, and he himself became a disciple of the late Thamanya Sayadaw, a monk who formed a vegetarian Buddhist community in 1982. U Thuzana founded Myaing Gyi Ngu Old City, which has evolved into a large temple complex. The site also served as the DKBA headquarters in 1994. Inside the compound, his followers adhere to his moral rules: the five Buddhist precepts strictly observed; no anger, no fighting, no politics; no discussion of religious differences; and no gossip.

In 1975, U Thuzana was a member of the KNU Religious Executive Committee. Serious differences between Buddhist and Christian factions emerged during the mid-1980s. In 1989, Gen Bo Mya, the KNU leader, gave him permission to build a pagoda on a mountain at Thu Mwe Hta above the junction of the Salween and Moi rivers looking toward Manerplaw, the KNU headquarters at that time.

Construction was halted, however, on supposedly military grounds. Meanwhile, a KNU officer was accused of mistreating Karen Buddhist followers of the monk and committing crimes against them, including murder and rape.

A bitter dispute over the halted pagoda construction led to charges of arrogance and discrimination and numerous physical attacks on Buddhist followers of U Thuzana.

A significant part of the Karen-on-Karen conflict is that the Pwo Karen, mainly Buddhist and often the poorest segment of society, feel that the better educated and wealthier Karen have suppressed them since colonial times. The last straw was the denial of a long-time request for a pagoda to be built in Manerplaw.

In December 1994 and 1995, entire KNLA regiments broke away to form the DKBA, which now numbers about 6,000 soldiers. Ill feelings grew against the mostly Christian leadership of the KNU, and DKBA troops attacked Christian settlements, even in Thailand, and eventually joined forces with the Burmese army to overrun Manerplaw in 1995.

When the fighting started, U Thuzana withdrew, saying he would conduct a 49-month retreat, a move that was seen as a way to distance himself from directly generating violence, illustrating the dilemma of a politically engaged Buddhist monk.

Since then, the DKBA has been used as an instrument of the Burmese army in its repression of the KNU. Both sides have been accused of committing atrocities and crimes against Karen civilians.

However, during this time U Thuzana and his followers have gradually managed to improve civil society, constructing roads, schools and health clinics, as well as new villages. They provide vegetarian food for the   workers. The recruitment by DKBA soldiers may not be altogether voluntary, but supporters say the workers are not punished or killed, a charge frequently leveled at the Burmese army.

U Thuzana’s supporters say that he has created an area of relative peace and nonviolence, a “Buddhaland,” which the Burmese army is reluctant to enter. He has also rejected honorary Buddhist titles offered by the junta-controlled sangha [monkhood] establishment. His Karen followers call him Phu Ga Cha, “Lord Grandfather,” signifying his leadership role and his power.

One of the esoteric elements of his charisma lies in his claim to have discovered a lost Karen alphabet called Lei Tjaung Hwei (Pwo Karen: “Letters of Chicken Scratch”). It is also called Lei Gwae Gau’ after the 19th century Karen cultural hero and rebel Mìn Laùng, who fought the British. An old prophecy said, “If letters are discovered, the Pwo and the Sgaw Karen will reunite; the chicken will roost on Gwae Ga Baung mountain (Zwe Kabin near Pa-an, the center of Karen culture) and the gong will sound.” In other words, U Thuzana will look after his people, create peace and call upon all Karen to unite.

In the imagination of many Karen, the alphabet is a sign of U Thuzana’s powers, stemming from the Karen myth of the lost book of knowledge in which the lord of the universe (Yuah Ga Cha) gave knowledge to the Burmese, Thai, Mon, Karen, and foreigners, all of whom managed to preserve it, except for the Karen.

Recently, U Thuzana has been treated in hospital in Bangkok , suffering from a lung condition. He keeps in close contact with his followers, and he reportedly held a meeting with KNU officials late last year and proposed a cease-fire between the KNU and the DKBA.

In these troubled and volatile times in Karen State, observers wonder if a charismatic Buddhist monk who played an integral part in the Karen divorce could now be a pathway  to Karen reconciliation, in a time when the military regime is demanding that the DKBA bows to its wishes and becomes a border guard force.

------------
Mikael Gravers is an anthropologist at Aarhus University in Denmark. Since 1970, he has conducted fieldwork among the Karen.