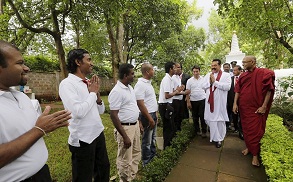 This Theravada Buddhist temple that has been functioning for more than a decade consists of a small stupa, meditation hall and a residence for monks.

President Rajapaksa worshiped at the temple and participated in several religious activities. The President also presented Atapirikara to the Chief Incumbent of the Viharaya, Venerable Wimala Thero.  The Thero chanted Seth Pirith and blessed the President and the people of Sri Lanka.

The President is currently on a four-day State visit to Kenya.