In search of that elusive sense of detachment

Bangkok, Thailand -- May 27 will mark the centenary of the birth of one of Thailand's most venerable Buddhist monks - Buddhadasa Bhikku, who passed away in 1993. But his teachings on Buddhism still have a huge influence on Thai intellectuals and Buddhists in general who strive to grasp the essence of Buddhism in its purest form. 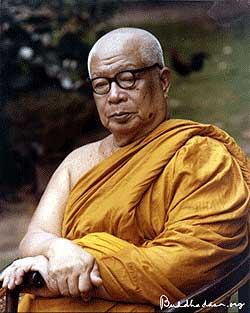 I remember vividly my first and only encounter with Buddhadasa. Almost 20 years ago, I accompanied a small group of people to Surat Thani, where Buddhadasa founded his Suan Mokkha in 1932 at the age of 23. Suan Mokkha is one of the numerous "wat pa", or temples in the jungle, in Thailand, cut off from all worldly temptations so that the monks and lay Buddhists can concentrate fully on learning and pursuing the path of salvation as laid out by our Lord Buddha. It was clear from the very beginning that Buddhadasa was determined to learn and discover Buddhism by his own way.

We arrived at Suan Mokkha late in the evening and were taken to one of the small wooden houses to rest. Frugality was the way of life there. Green trees were everywhere. We were told to wake up very early in the morning to listen to Buddhadasa's teaching and discuss any subjects regarding Buddhism with him. It was pitch dark. We dared not look outside the window or venture out for fear of seeing ghosts.

At about 5 o'clock the following morning we were woken up and taken to see Buddhadasa. His lodging also looked very simple and frugal, without any decoration. We sat on the floor outside and before long he appeared with his stout body and grim expression, wearing his thick black glasses. Then he settled comfortably on a marble chair and began to greet us casually. I cannot remember all the conversation on that day but I do remember asking him one question.

"If we all strive for salvation, then how should we treat world's masterpieces produced by geniuses like Mozart or Beethoven?" I said.

Buddhadasa replied: "Arts are simply worldly inventions of human beings." I cannot recall what he said beyond that sentence, but his manner seemed very detached from all of us.

I have to confess that at that moment, I was rather disappointed with his answer. I thought then that it was uncharacteristic for Buddhism to repudiate the greatest artistic achievements of mankind. Bach wrote marvellous church music to celebrate Jesus Christ. There are also several great Buddhist artworks depicting the life of the Lord Buddha.

I could not have understood then that we were talking about different subjects - the universal and the particular. He was an enlightened monk, who was conscious of the transient nature of the world and was detached from all worldly desires to the point of complete self-denial. Any subject that did not concentrate on ending suffering or striving for the ultimate truth was of secondary importance or simply represented a manifestation of worldly desires.

He found that the Lord Buddha discouraged any subject that inhibited the quest to achieve salvation. For instance, Lord Buddha was frequently asked where human beings went after their death. Would they go to heaven or hell? Lord Buddha treated these subjects as irrelevant and concentrated on teaching the foundation of ending suffering.

Buddhadasa sought to follow the Lord Buddha's steps by going directly to the essence of Buddhism without the aid of all the rituals. He came up with the famous "myself/mine" ("tua ku, khong ku") doctrine. All human suffering starts with our misconception or ignorance about the self. We presume that the self exists. That is why we feel happy when we get what we want. We feel sad when we depart from our lovers or do not get what we want. All of our desires are created by the ignorance of the self, which reacts to the senses. But, in reality, there is no such a thing as the self, which is part of the corporeal world that is constantly in a state of flux. There is nothing permanent in this universe.

Buddhadasa explained that if we can overcome the myself/mine mindset, we can then break out of the cycle of suffering. We can realise enlightenment at any moment in time - every minute, every second of the day - if we approach the world as it is, without any involvement of the self.

Since Buddhadasa denied all rites or rituals associated with Buddhism, he was not popular among the general population. Most Thais flock to famous monks in order to get blessings for their life. They like to have holy water sprinkled on their heads or get Buddha amulets from famous monks in order to further boost their stars ("duang") or salvage their misfortunes. They make merit because they believe that they will live better in the next life.

As we honour the life of Buddhadasa, we should make the time to go back and read one of his numerous books on the myself-mine doctrine. If we could practice half of what Buddhadasa has taught us, Thais would live more meaningful lives, free of hostility such as we are experiencing now with the current political polarisation.