Updates to the Now

Editor McLeod delineates Buddhism's uniqueness: nontheistic, concerned with mind rather than, say, First Cause or unsayable Name; no divine prophet, no sacred book

San Francisco, CA (USA) -- Eternity, Blake says, is in love with the productions of time. (And vice-versa!) Ultimately, truth has no beginning, middle, nor end. Yet it intertwines with the historical world. So each year I greet with great pleasure—and a divine delight—yet another new edition of The Best Buddhist Writing. And 2010, seventh in the series, is no exception. 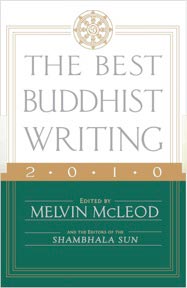 What constitutes "best" (and, for that matter, "writing" and "Buddhist")? In a brief interview with American Book Review, series editor Melvin McLeod outlined for us some defining traits:

Honesty - willingness to be honest about realities of life - is one characteristic I look for. Heart and compassion and sympathy for one's self and others. Realization is another. And a sense of beauty and elegance in writing.

If an anthology is a critical act, the Best Buddhist Writing exemplifies high standards. Along with an engaging range and meaningful depth of selection, Mr. McLeod's introductory briefing to each year's crop is invariably an integral pleasure of the book's occasion. He has worked in media for over thirty-five years, as editor of Shambhala Sun magazine since its inception in 1993. His writing and editing balance analytic rigor with warm, open-heartedness—a blend that typifies his Vajrayana Buddhist lineage. Call it citizen journalism, or spiritual journalism—he publishes what he practices.

So what's at hand for 2010? Editor McLeod locates this year as one whose global affairs continue to have been marked by religion. He then delineates Buddhism's uniqueness: nontheistic, concerned with mind rather than, say, First Cause or unsayable Name; no divine prophet, no sacred book. This gets to the bones of the Buddha's foundational teaching. To paraphrase the Jogger's Mantra: pain is inevitable, yet suffering is extra.

In these pages, you'll thus find accounts of diverse people variously coming to grips with pain and suffering, opening with Stan Goldberg's memoir of volunteering in a hospice shortly after his own diagnosis of prostate cancer. Zen priest Norman Fischer faces his grief at the death of his best friend, Rabbi Allan Lew. Jarvis Jay Masters writes from Death Row, on experiencing freedom.

Just by being aware of others' suffering and opening to others' experiences and insights we're invited to widen our own view. This also reminds us not to seek changeless, absolute truths (thank God). Rather, truth is in life itself.

Buddhism's practical antidote to needless suffering is exemplified here via the words of Sylvia Boorstein (on human solidarity), Pema Chödron (on vulnerability to pain as opportunity for growth), Gaylon Ferguson (on our natural wakefulness), Ven. Thich Nhat Hanh (in q&a with kids), Dzongsar Jamyang Khyentse Rinpoche (on the art of awareness), and Yongey Mingyur Rinpoche (on finding joy amidst difficulties). Each offers us an awakening to a better way, always available to us,

in the present moment. (When else?!) Whatever the insight, activity, or meditation offered, each author reminds us of the birthright of our inherent buddha nature, already within our reach.

In short, this latest installment in a worthy, noble, and most-welcome series offers, as ever, a nice blend of episodic detail and panoramic perspective, served up via a pleasantly eclectic mix of voices. Seeds, path, and fruit are all in clear view, depending on your level of engagement. And you don't have to be Buddhist to appreciate or derive benefit from any of it.

Besides looking at the book head-on—as to its contents—we might also turn it sideways, for contexts. Let's explore the publisher's carving a path for Buddhism in the West, and the impact it's having.

The Buddha ("The Awakened") was a realized teacher who, during his life, spoke directly to his students. The presence of living teachers is thus crucial. This writer recalls when more Eastern Buddhas were sitting out in museums, behind glass, than living, breathing ones. Consider the exiled Tibetan Buddhist teacher ("rinpoché") Chögyam Trungpa (1939-1987). One of his students, author Rick Fields, once recalled, "He caused more trouble and did more good than anybody I've ever known." The good well remains.

Back in the cultural/spiritual revolution of the 1960s, two of his acolytes hung a shingle out on Telegraph Avenue, Berkeley: Shambhala Booksellers. It would become one of the country's most diverse and comprehensive purveyors of what was then known as "New Age." But note the name. Not "bookstore." Not "bookshop." Not "books." Booksellers: meaning, people. After all, it's people who become buddhas. (Or who already are, and just need a little encouraging.)

One day, a book appeared on their shelves they themselves published: Meditation in Action, by Chögyam Trungpa Rinpoche. A transcript of some of his talks, it merged three modern technologies: tape recorder + transcriber + word processor. A year later, in 1970, talks by Shunryu Suzuki Roshi were published as Zen Mind Beginner's Mind. (The original publisher was Weatherhill, another independent house; this, backed by a Japanese tea ceremony lineage.

Shambhala has since acquired the title). Both remain classics, beloved by beginners and adepts. These also prepared the ground for such landmark bestsellers as Being Peace by Thich Nhat Hanh, which laid the cornerstone for Parallax Press, and The Tibetan Book of Living and Dying by Sogyal Rinpoche, and The Art of Happiness by The Dalai Lama, from mainstream publishers. Two other early, notable titles from Shambhala's launch that also proved game-changing were The Tao of Physics and The Tassajara Bread Book. Now the press is an imprint of Random House. They thus engage America's cultural arena—the marketplace—while staying on the growing edge of titles on Buddhism and contemplative practice.

By the way (to digress for a beat), books are a Buddhist origin, in and of themselves. Did you know? Movable type was invented in Asia to disseminate Buddha's teachings, before Gutenberg.

While texts transmitting teachers' living words have always played a role in Buddhism, we see now a newer trend, that of applications -- "news you can use"—be it dealing with illness or aging, or in relationships or at work. In this year's anthology are two entries on food (and what spiritual tradition doesn't express thanks for food?), also surfing . . . Alice in Wonderland . . . fire . . . and diarrhea. It's all potential Dharma (all the literal stuff of truth).

One step more along this vector, we discover the West giving birth to a marvelous new genre: Buddhist memoir. Self as subject isn't a venerable tradition in the East, as it is here. In Stephen Batchelor's current title, Confessions of a Buddhist Atheist, for instance, we can hear the echo of St. Augustine's confessions. Yet Buddhist memoirs are, in fact, quite apt, given how this path is experiential, first-person. As the Buddha said, "Come and see."

(Ehipassiko.) It's for each of us, that is, to see for ourselves.

And, as traditions from different nationalities meet and cross-fertilize in the West, there's increasing engagement of Buddhists in contemporary social and political issues, most commonly environmental. David Loy's piece, "Why Buddhism Needs the West," is a sharp case in point. The title draws upon a trope from American Buddhist ecopoet Gary Snyder, from forty years ago: "The mercy of the West has been social revolution; the mercy of the East has been individual insight into the basic self/void. We need both."

Naturally, for Buddhism to take root in America, it must accommodate ethnic and class diversity, women taking an active role, gays, vigils, marches, writing elected officials, environmentalism, and so on. One way Buddhism uniquely informs political engagement and social justice is in applying its critique of self on larger degrees of scale (corporation, political entity, etc.), as equally liable to, and capable of liberation from, the same suffering as so-called individual self. Work on self and work on the world are one.

Allen Ginsberg once wrote: "While I'm here, I'll do the work. What's the work? To ease the pain of living. Everything else, drunken dumb show." The Best Buddhist Writing encourages the work. The real work, timely in any season.

This article was first published at American Book Review.

----------
Gary Gach is author of Complete Idiot's Guide to Buddhism (third edition), editor of What Book !? -- Buddha Poems from Beat to Hiphop, and co-translator of three books by Ko Un. His website is here.