The Seven Scrolls Tengu: Evil and the Rhetoric of Legitimacy in Medieval Japanese Buddhism, by Haruko Wakabayashi. University of Hawai'i Press, 2012, 203 pp., $50.00 (hardcover)

Tokyo, Japan -- Residents of Japan will be vaguely aware of the long-nose impish figures known as Tengu, thinking of them as piquant figurines without deep religious significance. Tengu take many shapes in Japanese folklore, for instance as mischievous kidnappers of children or Pucks leading travelers astray. 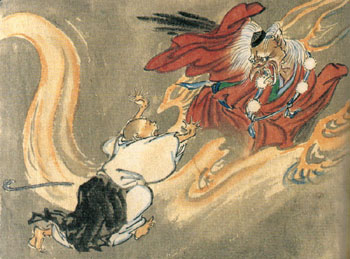 Heavenly dogs: Found throughout Japanese folklore, the tengu are a class of supernatural monster spirits. Buddhism has long held they are harbingers of war. Depicted here "Tengu and a Buddhist monk," by Kawanabe Kyosai.

Haruko Wakabayashi focuses on a grimmer aspect of the imp, as he appears in Buddhist thought, connected with evil forces such as the demon Mara who distracts monks from their spiritual path. She shows how Buddhists used Tengu images to "demonize" challengers of authority and to shore up their own institutional legitimacy.

If Tengu are really so wicked, it may become hard for us to look on them benignly any longer as cute ornaments. But perhaps what Buddhist monks see as evil is really only something mildly naughty. In any case the author is of the devil's party, locating the real "evil" in the repressive Buddhist establishment, though she does not develop this idea very much.

In the Heian Period, Tengu had a lot of clout as instigators of epidemics, natural calamities and wars. They figure often in literature, for instance in scenes of spirit-possession in "The Tale of Genji." The Shingon Buddhist leader, Shinzei, turned into a Tengu and possessed the Empress Somedono, or so the Tendai rivals of Shingon claimed. Tengu were shifty beings, who could turn themselves into shining Buddhas or cure an emperor where others had failed. Analyzing the tales in the 12th century Konjaku Monagatarishu, Wakabayashi shows that the Tengu are systematically presented as the antithesis of Buddhism: "They are portrayed as an evil that defies religion, uses magic to deceive, symbolizes those who cannot achieve ojo (rebirth in the Pure Land), spreads heresy and attracts weak-minded practitioners."

In the Kamakura Period, adherents of new forms of Buddhism, including Zen, were denounced as falling into the realm of Tengu (tengudo), a novel addition to the six realms usually distinguished. Speaking though a possessed woman, a Tengu revealed to the Tendai monk Keisei in 1239 that lots of important religious and political figures were consigned to this realm, including Emperors Sutoku and Goshirakawa.

However, there are also good Tengu, and the Tengu realm can be a place where monks continue to practice and seek enlightenment. This "shows an interesting development in the concept of evil," which reflects the ideology of "original enlightenment," according to which all beings manifest the primordially enlightened Buddha and "passions themselves are enlightenment."

This leads to a rhetoric about the nonduality of good and evil that is hard to swallow. Mara and the Buddha are one and the same; "hell and heaven are both pure lands"; "Tengu are indeed buddhas as they are, regardless of their evil nature"; "evil is affirmed as being one with the good." Do such declarations do justice to the reality of evil? Wakabayashi suggests that having a good understanding of evil helps one to pursue enlightenment more effectively. Even the Buddha has an evil nature, in this sense, but it does not necessarily lead him to commit evil deeds. Evil and good are one only for those who recognize evil as evil, and sincerely undertake reform.

This book centers on a copiously illustrated study of seven Tengu scrolls, composed by Tendai monks in the line of Enchin at Onjoji, rival to that of Ennin at Mount Hiei. Five of the scrolls deal with the topography and history of the seven major temples of Nara and Kyoto and the fate of their monks who became Tengu because of their arrogance. Tengu are arranged in a hierarchy resembling that of the Buddhist clergy, but more rigid. Indeed the Tengu are presented as more disciplined than the Buddhist clergy, in an ironic contrast recalling Milton's "devil with devil damned, firm concord holds."

The lecture meeting known as the Yuima-e was in a state of decline at this time, and the scrolls present it critically. A lecturer has the beak of a Tengu, and the ritual dance is presented with emphasis on the monks' profane enjoyment, extravagant costumes, and voyeuristic interest in the boy dancers.

The other two scrolls target the new schools of Buddhism. Ippen (1239-1289) is depicted as in the hagiographic Ippen hijiri-e distributing food to the poor, performing the nenbutsu dance, and distributing slips of paper bearing the name of Amida Buddha; then, with mocking intent, he is portrayed giving out his urine, an unclean medicine for his less well-off followers. These new Buddhist leaders are consigned not to the realm of Tengu, where they could still seek enlightenment, but to that of beasts.

Haruko Wakabayashi may not have solved the problem of evil, but she has brought into focus a neglected chapter in Japanese culture, revealing its unsuspected depth and coherence.