San Francisco, CA (USA) -- What happens when a Buddhist monk makes his way out of the mountains of Tibet after a lifetime of devoted practice? Well, he has a story to tell and also a philosophy to unpack for a wide-eyed journalist, who confronts this stranger from afar with a mixture of awe, reverence, and deep mistrust. 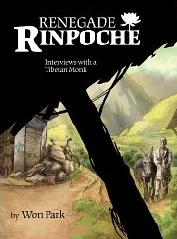 Veteran writer Won Park approaches his debut novel with a twist of realism, placing himself in the role of interlocutor, and the monk in the role of visionary, mystic, and guru. The result is a series of interviews that stretch the boundaries of Buddhist experience.

Few stones are left unturned in the scramble to understand what makes a 78-year-old Buddhist tick. The main character, Lhapka La, is neither an idealist nor a skeptic in his own cloth. He is driven by a desire to teach and to share, but also to protect what little he has in the world -- a bowl, good health, and the sanctity of life.

"Renegade Rinpoche: Interviews with a Tibetan Monk" was cultivated through Won's own extensive Buddhist experience. It is a book that is sure to intrigue and entertain. In its pages, the interplay of a newcomer and a veteran Buddhist will strike many sparks in the mind of a reader who, himself or herself, has struggled with the passage to enlightenment.

Many questions are answered, but no issues are resolved. It is up to the reader to sift truth and reality from fiction or misguidance -- exactly the way things are in real life. In that sense, "Renegade Rinpoche," from Florence Publishing Co., is a refreshing departure from traditional writing on Buddhist thought and practice.

Electronic copies at $4.95 are available through Kindle on Amazon.com. Print-on-demand copies will be available in August.