Berkeley, CA (USA) -- Creating a 1.2 million–word dictionary devoted to the principles, practices, people, places and pennings of Buddhism might seem like the kind of feat possible only through the intervention of nirmanakaya, a kind of doppelganger of the Buddha, or manomanakaya, subtle magical bodies acquired during meditation. 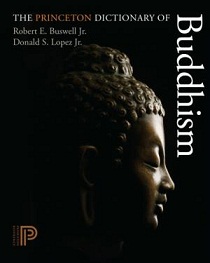 Yet a pair of U.S. academics has done just that. Aided only by a crew of graduate students, Robert E. Buswell Jr., a distinguished professor of Buddhist studies in UCLA's College of Letters and Science, and Donald S. Lopez Jr., a distinguished university professor of Buddhist and Tibetan studies at the University of Michigan, Ann Arbor, have compiled the most comprehensive and authoritative dictionary of Buddhism ever produced in English.

At 1,304 pages, "The Princeton Dictionary of Buddhism" is five times bigger than its nearest competitor—a dictionary published in 2003 by Oxford University Press.

Scheduled to be published Dec. 11 by Princeton University Press, Lopez and Buswell's new reference work is also the first dictionary to cover terms from all of the canonical languages and traditions of Buddhism.

In all, more than 5,000 encyclopedic entries are connected through a dense web of cross-references that allow readers to not just define terms but also find related and equivalent terms in the multiple languages and traditions that have embraced the faith, which started in India and spread to East Asia, Southeast Asia and Tibet.

The dictionary, for instance, is a place to trace the evolution of the idea that the mind is inherently bright and clear from India, where Pali and Sanskrit texts describe the mind as pabhassara/prabhasvara (luminous), to China and Korea, where Zen tradition transforms the concept into the crucial meditative terms lingzhi (numinous awareness) and fanzhao (tracing back the radiance), to Tibet, where the terms 'od gsal (clear light) and rig pa (pure awareness) become integral to rdzogs chen (great perfection or great completion) practices.

"The elaborate cross-references we included in the dictionary made it possible to see the ways in which seminal Buddhist concepts have changed as they moved across cultural boundaries," Buswell said. "Suddenly we ended up with whole sets of interconnections that I would not always have expected to find."

More than a decade in the making, the dictionary also includes a chronicle of relevant historical periods (empires, dynasties and kingdoms) and a timeline of Buddhism from the sixth century B.C. to the 21st century. Eight maps show both the Buddhist cosmological realms and the many Buddhist regions, marking the major cities, important monasteries, sacred places and pilgrimage routes spanning geographical sites in India, China, Japan, Korea and Tibet. The dictionary also includes an appendix of the many doctrinal lists that have proliferated in Buddhist materials, from the "one vehicle" to the one-hundred dharmas of the Yogacara school.

"We've gone back and asked, 'If you were looking at Chinese or Japanese or Tibetan Buddhism, what are the concepts, the places, the people, the texts that you should really know,'" said Lopez. "That was one of the questions we asked when deciding what terms to put in the dictionary. Even with more than a million words, there were still many things we could not include."

One of the oldest terms included among the entries may be ye dharma, a Sanskrit phrase that translates roughly as "those phenomena," referring to the central Buddhist notion of causality: Things are created by causes and if you remove the causes, those things will vanish. The phrase appears in a famous early story about the conversion of Sariputra, one of the two most important disciples of the Buddha. Entries on more recent terms include Rissho Koseikai and Soka Gakkai, which are contemporary lay Buddhist movements in Japan that have attracted followers in the West.

Lopez, who chairs the department of Asian languages and cultures at the University of Michigan, started the project in 2001. Having lived as a graduate student for a year in Tibetan refugee monasteries in India in the late 1970s, the 32-year veteran of Buddhist studies is now a prominent authority in Tibetan Buddhism. He reads classical Tibetan as well as Sanskrit, one of the religion's original languages. Among other titles, Lopez is the author of "Prisoners of Shangri-La" (University of Chicago, 1998), "Elaborations on Emptiness" (Princeton University Press, 1996) and "From Stone to Flesh" (University of Chicago, 2013).

Lopez invited Buswell, a 30-year veteran of the field, to join the project after they collaborated on the "Encyclopedia of Buddhism," a 500,000-word encyclopedia spearheaded by Buswell and published by McMillan Reference in 2004.

"Don called and said, 'I helped you with the encyclopedia, why don't you help me with the dictionary,'" Buswell recalled. "None of us has the kind of background necessary to comprehensively talk about the entirety of Buddhism. The field's just too big now for one person to really master it."

Buswell has been working on the project full time since 2005. In his early 20s, he was ordained as a Buddhist monk and trained for seven years in monasteries in Thailand, Hong Kong and Korea. Today he specializes in East Asian strains of Buddhism, particularly Korean Son, the Korean equivalent of the Japanese Zen tradition. Among many other books, he is the author of "Cultivating Original Enlightenment" (University of Hawaii Press, 2007) and the 1992 memoir "The Zen Monastic Experience" (Princeton University Press). He is a specialist in classical Chinese and Korean, has a master's degree in Sanskrit and also reads a smattering Pali and Japanese.

While they now are leaders in two of the West's largest Buddhist studies programs, the scholars entered academia at a time when the field was much smaller and not nearly as specialized as it is today.

"Don and I were right at the tail end of a generation that had the luxury of time to develop skills in these various languages," Buswell said. "Today there's so much pressure to finish degrees quickly that students just don't have the decades they need to master the range of languages used in Buddhist texts."

The linguistic grounding came in handy. Tibetan, which is characterized by complex consonantal ligatures, or what Lopez jokingly calls "car wrecks of consonants," would befuddle most English speakers. For example, the current Dalai Lama's name is transcribed in Tibetan as bstan 'dzin rgya mtsho and is pronounced something like "Tenzin Gyatso."

In powering through the herculean project, which underwent five rounds of copy-editing alone, the scholars said they were particularly motivated by a desire to elevate awareness of each of their specialties.

"We both felt that the Tibetan and Korean traditions had been given short shrift in past dictionaries, which have tended to favor Japanese Zen and the Theravada traditions of Southeast Asia," Lopez said. "We're trying to bring other traditions up to their level. The idea was to be as balanced and comprehensive as we could be in a five-pound book."

But it also helped that both happened to have fathers who served as officers in the U.S. Air Force, Lopez believes.

"We wonder whether the discipline we needed for this project was something we inherited from our fathers," he said.

At least one display of discipline behind the dictionary's creation was not inherited, however. Buswell actually completed his contributions in the way he does all his writing—while seated on the floor in the lotus position with his laptop slightly elevated.

"I'm not comfortable any other way," he said.

Though the traditions illuminated in the dictionary may be varied, a single concern prevails, the authors say.

"The different schools of Buddhism are all talking about how you engender an experience of radical nonattachment to any conception of self," Buswell said. "That to me is the fundamental quality of Buddhism. The incredible diversity of Buddhist beliefs and practices derives from the various ways this experience is described and the stages that lead to it."

------
Robert E. Buswell Jr., a distinguished professor of Buddhist studies in UCLA's College of Letters and Science, is co-author of a new comprehensive dictionary of Buddhism.