Thoughts Without a Thinker: Psychotherapy from a Buddhist Perspective

Williamsburg, VA (USA) -- My introduction to the blending of Western psychology and Buddhism was Psychotherapy East and West, by Alan Watts, many decades ago. My own work as a therapist has included an underlying Eastern philosophy. Yet somehow I did not come across Mark Epstein’s book until now. 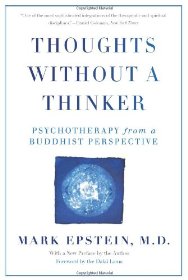 I have found his Thoughts Without a Thinker: Psychotherapy from a Buddhist Perspective to be an invaluable addition in my professional work, in my own development, and when I teach taijiquan (tai chi). The book was originally published in 1995, and part of it appeared in 1992 in Tricycle: The Buddhist Review “as “Freud and Dr. Buddha: In Search of Selflessness.” This 2013 edition is the second revision and has a foreword by the Dalai Lama.

Epstein’s purpose is to build on and move beyond work done by individuals such as William James, Alan Watts, Carl Jung, Joseph Campbell and others and to develop an effective synthesis of clinical psychotherapy and intensive Buddhist meditation. He has extensive training and experience in Freudian psychoanalysis and Buddhist meditation and does an excellent job of integrating the two.

Epstein begins with a review of Buddhist psychology and the way of living. The Buddhist model of the mind is the wheel of life. We all have hungry ghosts — the “fusion of rage and desire” — which we can think of as beings that are never sated or satisfied. Enlightenment is not an escape from the wheel and its ghosts through the Four Noble Truths and the Eightfold Path, but a “clear perception of oneself, of the entire range of human experience.” It is the elimination of narcissism, and the realization that the self as we commonly perceive it is an illusion.

Epstein is great at breaking down each of the four truths and eight paths into understandable components, and shows the way they can each work with psychotherapy. Indeed, Epstein feels that Buddhism is a form of depth psychology. Early in the book, he explains how William James said that the future of psychology was in Buddhism. For a long time, however, it was Freud’s lack of pursuit of Eastern philosophy that helped keep Western psychology from utilizing the principles of Buddhism.

The book also takes an in-depth look at meditation and debunks, or at least tweaks, popular conceptions. One of the great buzz words we all hear now is “mindfulness;” meditation is often pushed as a means to mitigate anxiety and depression. Freud’s view of mediation as the mystical “oceanic experience” has also had its effect on how meditation is perceived in the West.

I have heard many people say they have tried meditation and given up because they could never completely clear their minds and transcend into that blissful oceanic state. In Buddhism, Epstein points out, mindfulness begins “with awareness of the breath and body: the appreciation of the temporally based dimension of self stems from the ability to pay attention to bodily based experiences as they occur. It is quite literally a coming to one’s senses.”

Epstein’s explanation of the metaphors of the spatial and the temporal self helped me to understand the Buddhist concept of “no self.” Meditation works to give us a sense of the metaphor of self and complements the development of ego in therapy, and fills the problem Freud wrote of — the inability of psychoanalysis by itself to “produce an ego strong and versatile enough to accomplish [Freud’s] therapeutic goals.”

The last part of the book is about therapy and is guided by Freud’s method of “remembering, repeating, and working-through.” Epstein teaches the principles and skillfully uses stories from his own analysis and meditation practice and from his work with clients over the years to demonstrate how the teachings of the Buddha work quite well to fill in the gaps of traditional psychotherapy.

In particular, Epstein frequently refers to the concept of nonjudgmental bare attention. When feelings and thoughts arise, you just pay attention without judging them or yourself. It is impartial and open. I have found bare attention useful in dealing with psychological and emotional pain, as well as physical pain. It is also a method I have found helpful in teaching taijiquan and in sports psychology.

One principle of taijiquan is that you only use the muscles necessary for the movement. So, I tell people: Pay bare attention to your body as you move. Do not judge, do not force, just observe. Bare attention gets rid of all the critical self-talk that can bog a person down in the spatial self. Epstein’s explanation and use of it in the book are excellent.

Freud has taken a lot of criticism over the years, and classic psychoanalysis is not very popular these days. Epstein does a remarkable job of explaining the principles of both the Freudian and the Buddhist system. He deftly shows how Buddhist psychology can help not just traditional psychoanalysis but any form of psychotherapy work better for therapists and clients. His is also a good book to read if you are working on your own mindfulness and meditation practice and hope to move beyond the sense of self that you cling to and the cravings that bring you suffering.