by Tavivat Puntarigvivat, published by Institute of Research and Development, The World Buddhist University, Bangkok, 2013.

Singapore -- The recently published book ‘Thai Buddhist Social Theory’ by Thai academic Dr Tavivat Puntarigvivat gives a very good authentic insight into the interpretations of the teachings of the Buddha and development of Buddhist institutional frameworks in Thailand from a welcomed critical perspective. It is a timely contribution to concerns across Asia about the social role of Buddhism. 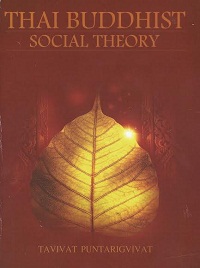 Very few Asian Buddhist academics try to take the Buddhist teachings (Dhamma) out of the confines of Buddhist Studies and apply it to contemporary political, social and economic models, which Tavivat has done very well.

The book has been well structured, perhaps with possible academic application in mind, that begins with characteristics of religion in Thai society, its institutional structure and attempts to reform it, and then goes on to discuss  Dhammic Socialism, Buddhist model of Liberation Theology, Buddhist social ethics, environmentalism and interfaith dialogue. Though the material is presented from a Thai context most of what is discussed are also applicable to other Buddhist countries, especially Theravada Buddhist countries such as Sri Lanka, Cambodia and Myanmar.

With Buddhism in many Asian countries and particularly in Sri Lanka and Myanmar, facing many threats especially from rising Christian evangelical movements and Wahabi Islamic movements, this is a timely book to encourage Buddhists, especially in the academia, and development and policy planning areas to look at the application of Buddhist teachings to social and economic development from a refreshing modern context.

In the first chapter the author gives a good insight into how Buddhism influence and guide Thai society, while taking a critical look at its institutionalization to promote elitism, nationalism and even capitalism. Tavivat says “while intellectuals participate in Buddhism from a doctrinal perspective, the ordinary people contact Buddhism through tradition and rituals of merit making (and) even though ordinary people may not know or understand the sophisticated Buddhist doctrines, their participation in merit-making rituals serves as symbolic action for Buddhist values and ideas”.

Thus he goes on to explain how Brahmanistic and animist (spirit) elements have entered these rituals and discuss how factions within the Thai elite compete to gain control over the interpretation and administration of Buddhism, “the key religious symbols of political legitimacy”.

In the second chapter the author gives a fascinating insight into the reform movements within Thai Buddhism starting with the era of King Mongkut in the 19th century to the current period of political instability. When faced with the rise of western science and activities of Christian missionaries in Asia, King Mongkut has looked for wisdom and strength in Buddhism to help counter these threats.
“Buddhism at the time was full of legends, miracles, supernatural beliefs, and superstitions. This has weakened Buddhism and Buddhism could not offer a basic wisdom for coping with western threats,” notes Tavivat. ”Thus, King Mongkut initiated a reform of Thai Buddhism for the first time in modern Thai history”. He discusses in detail how doctrinal and institutional reforms were initiated.

Coming to the modern era he focus on Bhikkhu Buddhadasa’s reform movement in the latter half of the 20th century that led to a grassroots Buddhist awakening. But Tavivat notes, “while Buddhadasa’s rationalist interpretations provide a strong criticism of supernatural and metaphysical Buddhism, his political views lean more towards authoritarianism than democracy”. In chapter 4 however the author goes into in-depth discussion of Buddhadasa’s Theory of Dhammic Socialism, which he credits for adding a socio-economic perspective to Buddhism in Thai society.

The author quotes from Buddhadasa’s own writings thus: “Philosophically, Dhammic socialism is based on this principle: none of us should take more than we really need. We should share whatever extra we have with those who have less. Social problems are fundamentally a result of greed. In other words, greed is at the heart of scarcity and poverty”. Later in the chapter Tavivat notes that Buddhadasa’s idea of democracy is in vivid contrast to Western conceptions of democracy. “Whereas Buddhadasa promotes fair distribution of wealth through the personal Buddhist practice of loving-kindness and giving, Western thinkers would argue that a fair distribution of income could be achieved only through law and democratic political institutions” points out the author.

In chapter 5 the author looks at a Buddhist economic model that could be applied to contemporary society and using Buddhist scriptures and the sermons such as the Sigalovada Sutra he discuss what this model could be in the context of public and private economy; private wealth management; nature of work and employment; Buddhist public policy and ethics; dignity of work; and the use of local and natural resources. The author argues that with growing number of people being dissatisfied with the current economic model there is a need to measure well-being with less materialistic and more qualitative goals and “Buddhist economics arises out of this demand for new economic objectives”.

It is chapter 6 on Buddhist Liberation Theology, which I think is the most important chapter of the book that addresses the root causes of grassroots Buddhist dissatisfaction and the inability of especially poor Buddhist communities to counter the growth of Christian charities with proselyting tendencies across Buddhist nations in Asia. The chapter could help to develop a Buddhist theory on human rights. This chapter should be compulsory reading for Buddhist activist groups across Asia.

The author argues that if greed is to be reduced or eliminated, personal self-restraint will not be enough, social structures need to be changed as well. “Many Buddhists seek liberation by practicing meditation, but do not pay sufficient attention to the way the society in which they live is being organized” he notes. He starts by discussing “structural poverty” in Thailand that has led to Thailand having a worldwide reputation (or shame as he points out) for well-established prostitution, sex trade and trafficking industry. He then proceeds to list and discuss with some details the work of many Thai grassroots “Buddhist-based Communities” that have tried to address this issue of structural poverty with various degrees of success.

If there is any criticism to be made about the book, it is that some tight editing may have been able to get rid of some repetitions, especially in the case studies sections. But, overall this is an excellent study of a modern day Buddhist society and its contradictions, as well as the modernist message of Engaged Buddhism that needs to be understood and implemented for economic and social wellbeing of modern society. This book is highly recommended for academic courses, especially in Asian institutions, on economics, development studies, sociology and mass communications.