Lost on the Path to Buddhist Economics

by Bernard Marszalek, Dissidentvoice.org, May 22, 2017

The opposition to the pillaging by the founders of what came to be called capitalism took many forms: from utopian colonies and secret societies of craftsmen to dissenting religious congregations, among other insurgent formations. Many of these rebellious eruptions have modern day equivalents. Intentional communities never disappeared though they cycle from popular ventures to backwoods near oblivion and workers hesitantly emerged from clandestine meetings to openly organize for their rights, though today corporate hostility to unions sees them returning to caution and secrecy.

And ecumenical dissent continues today to rail against capitalists’ disdain for ethical practices interpreted as obstacles to their bottom line. One strand of 19th century socialism spawned by liberal Protestantism was called Christian. But even the conservative Catholic Church, realizing that its flock was being fleeced so brutally by the shepherds of the marketplace, had to respond, or forever be condemned for its silence. It finally adopted a pseudo-critical posture with the “socialist” Pope Leo XIII’s papal encyclical Rerum Novarum, on the “Rights and Duties of Labor and Capital.”

More significantly, later in the century as capitalism reached the Russian Steppe, Leo Tolstoy born into the Russian aristocracy renounced his privileged heritage for a radical Christian pacifism that many interpreted as anarchist. Gandhi and later Martin Luther King drew upon his ethical teachings. There is, in other words, a long history of religious contention with capitalism.

It is no surprise therefore that with the 20th century popularity of Buddhism in the US and the revival of a “Robber Baron” epoch a new critical spiritual front arises to challenge the gross inequities visited upon society by the rich. Clair Brown’s Buddhist Economics attempts to define Buddhism’s dissent from market fundamentalism. 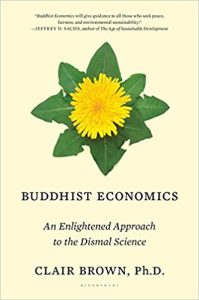 Clair Brown is Professor of Economics and Director of the Center for Work, Technology, and Society at the University of California at Berkeley. In her academic capacity Brown has been exploring globalization’s affects on high-tech engineers and their work, especially in the semiconductor industry.

In this book, however, she has laid aside her academic pursuits to write a popular and readable interpretation of Buddhist economics. For Brown Buddhist economics is premised on compassion for the other and for the natural world. In an economy based on Buddhism resources are shared in sustainable ways based on the Buddhist premise that true happiness does not derive from the external world of commodities, or celebrity, or power, but from within ourselves as “we surrender to the great unknown, develop love and compassion for everyone, and become aware of every precious moment of life.”

The core value for Brown in Buddhist economics is interdependence expressed in three ways. The first expression of interdependence posits a way of being with others that strikes at the very center of capitalism – the aggrandizement of the self through accumulation of goods, friends and honors. The second expression finds its outlet through a long view of environmental resources, not unlike the Native American seven generations perspective. On the contrary, the cost-benefit calculations of capitalism, as we all know, focus on immediate profit and loss and are integral to its functioning. And the third expression resembles a radical form of what is termed the care economy – primarily the unpaid work of women –generalized beyond gender and geography. In a Buddhist economy the elimination of suffering becomes a top priority. Combined, these expressions of interdependence form the foundation for a life of inner happiness – “one of the goals of Buddhist economics.”

Of the “three jewels” of Buddhism – Buddha, dharma and sangha – Brown emphasizes the last. Sangha represents our community, that is, those we are most intimate with, those with whom we are most interdependent. Here she quotes the Buddhist teacher Thich Nhat Hanh who, in the course of explaining that we live more mindfully when we create change with others, says:


Our collective compassion, mindfulness, and concentration nourishes us, but it also can help to reestablish the Earth’s equilibrium and restore balance. Together, we can bring about transformation for ourselves and for the world. 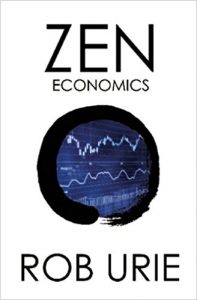 The Buddhism of choice for the Beats was Zen and so it may not come as a surprise that Zen Economics by Rob Urie takes a different path than Clair Brown’s Buddhist Economics. In fact, one could hardly imagine books that are more dissimilar. While Brown writes in a conversational style, Urie writes dense, cryptic philosophical prose. While Brown’s criticism of capitalism falls generally within the liberal orbit, Urie’s disdain for capitalism is total. These two differences alone determined why Brown’s publisher is mainstream and Urie’s publisher is maverick CounterPunch Books.

Urie, an artist, musician and political economist, immediately in the Preface delves into the anti-historical nature of capitalism, by which he means that it is based on premises that are mythic and idealized – metaphysical for Urie. For the proponents, or maybe we should say, the apologists, of capitalism it always existed, it’s natural. This is ideology, if not theology. Capitalism, Urie writes, exists outside of history “like a cloud above mundane concerns of historical fact.”  The notion of externalities, like the costs of pollution (to take but one example) that capitalists transfer to the public, demonstrates the anti-historical nature of capitalism.

And the agent of capitalism – homo economicus – well, he (it is always, he) came fully formed from the caves eager to practice utilitarianism and rational choice. Urie’s aphorism is appropriate:

Economic man is the actor who acts on ‘the world’ without living in it, the tourist without a home to return to.

Integral to capitalism and its totalistic concept is the fiction of democracy, which offers similar pre-selected choices sitting on the shelf – a can of soup or a politician.

Opposition? The metaphysical totality of capitalism embraces its “opposition” as serious only when it accepts the unreality of capitalist ideology and it relegates to limbo those who attack the totality with their own philosophical construct.

For Urie, Zen steps aside of the liberal shadow-boxing over policy and situates itself in material reality, or as Urie expresses it, in a clearing, from which to devise a non-metaphysical orientation. This was the Zen perspective that its most famous spokesperson D.T. Suzuki endorsed as opposed to the no-mind one, the most popular view of Zen Buddhism.

Though his book is titled Zen Economics Urie devotes only a few pages to Zen’s unique relevance to economics. And then only, like the rest of the book, in an aphoristic style both obtuse and illuminating, seductive and frustrating. In several places, Urie alludes to the significance of indigenous knowledge, like Zen, that subverts the metaphysical imperatives of capitalism because it is embedded in the world.

Buddhist Economics and Zen Economics, in vastly different ways, fail. Brown’s Buddhism fails to apply the devastating implications of its ethic and essentially falls back on Christian redemptionism. For example, the interdependency of Buddhism presumes something more than being kind to friends and neighbors, and certainly more than empathetic universalism for the poor of the world. Too often we find the Western translation of Eastern spiritualism infused by the pervasive individualism that Urie philosophizes in great detail. And Urie, for his part, fails to find continuity from his philosophizing to a concrete practice beyond traditional activism for one good cause or another.

Economics seems to take both authors prisoner. One by profession and the other, let’s say, by anti-profession. Of the two, Urie offers the better possibility of escape velocity, but never quite realizes it. Both authors recognize the futility of propping up homo economicus on a crumbling pedestal of nonsense, but neither imagines a concrete alternative. And I don’t mean homo cooperatius.

In her Introduction, Brown nods to E. F. Schumacher, the author in 1973 of Small Is Beautiful: Economics as if People Mattered, but she fails to mention that his essay Buddhist Economics was written in 1966, and it is all the more remarkable for his prescient views at that early date. Brown’s intention to “expand” on Schumacher falls short of his radicalism.

For example, she mentions Schumacher’s repudiation of consumption, but fails to note further in that paragraph the following:

In other words, Schumacher recognizes that toil lies at the foundation of capitalism as sacrifice to the commodity. Work, per se, and its inherent discontent never makes an appearance in Brown’s survey of employment injustices – pay, promotion and job safety.

Further, Schumacher’s disdain for consumption presumes not frugality but frivolity, that is, nonremunerative expenditure of time as in “artistic creation.” This prescient post-growth formulation precedes by five years the Club of Rome’s Limits to Growth and, unlike their perspective, hones in on the vital demand that work, specifically its reduction and ultimately its abandonment as toil, needs to be, as we recognize now, the radical prerequisite for a post-growth society.

And here too, Urie, though he emphasizes the value of indigenous knowledge, fails to recognize the potential significance of Sumac Kawsay, or Buen Vivir (“good living”), the worldview of the Quechua of the Andes as relevant to a post-growth orientation.

… sumak kawsay – or buen vivir, to give it its Spanish name – describes a way of doing things that is community-centric, ecologically-balanced and culturally-sensitive.

Economics as we have come to understand it assumes scarcity, which in turn presumes a certain behavior, a system of social activity, or maybe we should say, sociopathy. But let us assume abundance. Does economics still apply? Scarcity confines, abundance liberates. Religions thrive in scarcity. Abundance presumes another way of being, but what does this being consist of?

Are these speculations absurd?

-----------
Bernard Marszalek is activist in the alternative alternative economy sector. A former worker-member of a cooperative printshop for decades and currently agitating for a society beyond jobs, where the substantial activity of society melds work and play into a new conception of personal realization collectively attained. He archives his writings at his website (http://ztangi.org/).
TOP