'The Universe in a Single Atom': Reason and Faith

New York, USA -- It's been a brutal season in the culture wars with both the White House and a prominent Catholic cardinal speaking out in favor of creationist superstition, while public schools and even natural history museums shy away from teaching evolutionary science. When I picked up the Dalai Lama's new book, "The Universe in a Single Atom: The Convergence of Science and Spirituality," I feared that His Holiness, the leader of Tibetan Buddhism, was adding to the confusion between reason and faith. 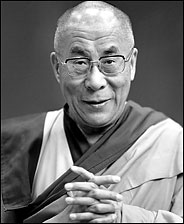 It was his subtitle that bothered me. Spirituality is about the ineffable and unprovable, science about the physical world of demonstrable fact. Faced with two such contradictory enterprises, divergence would be a better goal. The last thing anyone needs is another attempt to contort biology to fit a particular religion or to use cosmology to prove the existence of God.

But this book offers something wiser: a compassionate and clearheaded account by a religious leader who not only respects science but, for the most part, embraces it. "If scientific analysis were conclusively to demonstrate certain claims in Buddhism to be false, then we must accept the findings of science and abandon those claims," he writes. No one who wants to understand the world "can ignore the basic insights of theories as key as evolution, relativity and quantum mechanics."

That is an extraordinary concession compared with the Christian apologias that dominate conferences devoted to reconciling science and religion. The "dialogues" implicitly begin with nonnegotiables - "Given that Jesus died on the cross and was bodily resurrected into heaven. . ." - then seek scientific justification for what is already assumed to be true.

The story of how someone so open-minded became the Tibetan Buddhist equivalent of the pope reads like a fairy tale. When the 13th Dalai Lama died in 1933 he was facing northeast, so a spiritual search team was sent in that direction to find his reincarnation. The quest narrowed further when a lama had a vision pointing to a certain house with unusual gutters. Inside a boy called out to the visitors, who showed him some toys and relics that would have belonged to him in his previous life. "It is mine!" he exclaimed, like any acquisitive 2-year-old, and so his reign began.

Once installed in Lhasa, the new Dalai Lama happened upon another of his forerunner's possessions, a collapsible brass telescope. When he focused it one evening on what Tibetans call "the rabbit on the moon," he saw that it consisted of shadows cast by craters. Although he knew nothing yet about astronomy, he inferred that the moon, like the earth, must be lighted by the sun. He had experienced the thrill of discovery.

Before long he was dismantling and repairing clocks and watches and tinkering with car engines and an old movie projector. As he grew older and traveled the world, he was as keen to meet with scientists and philosophers - David Bohm, Carl von Weizsäcker, Karl Popper - as with religious and political leaders. More recently his "Mind and Life" conferences have brought physicists, cosmologists, biologists and psychologists to Dharamsala, India, where he now lives in exile from the Chinese occupation of Tibet. He and his guests discuss things like the neuroscientific basis of Buddhist meditation and the similarities between Eastern concepts like the "philosophy of emptiness" and modern field theory. In "The Universe in a Single Atom" he tells how he walked the mountains around his home trying to persuade hermits to contribute to scientific understanding by meditating with electrodes on their heads.

But when it comes to questions about life and its origins, this would-be man of science begins to waver. Though he professes to accept evolutionary theory, he recoils at one of its most basic tenets: that the mutations that provide the raw material for natural selection occur at random. Look deeply enough, he suggests, and the randomness will turn out to be complexity in disguise - "hidden causality," the Buddha's smile. There you have it, Eastern religion's version of intelligent design. He also opposes physical explanations for consciousness, invoking instead the existence of some kind of irreducible mind stuff, an idea rejected long ago by mainstream science. Some members of the Society for Neuroscience are understandably uneasy that he has been invited to give a lecture at their annual meeting this November. In a petition, they protested that his topic, the science of meditation, is known for "hyperbolic claims, limited research and compromised scientific rigor."

There may be a political subtext to the controversy. According to an article in Nature, many of the petitioners are Chinese. But however mixed their motivation, they make a basic philosophical point. All religion is rooted in a belief in the supernatural. Inviting a holy man to address a scientific conference may be leaving the back door ajar for ghosts.

THE UNIVERSE IN A SINGLE ATOM
The Convergence of Science and Spirituality.
By the Dalai Lama.
216 pp. Morgan Road Books. $24.95.