A Chant to Soothe Wild Elephants: A Memoir 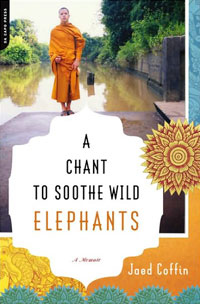 Evanston, IL (USA) -- In a small shed in Portland, Maine, adjacent to the house where he grew up, young Thai-American Jaed Coffin wrote about spending three months as a Buddhist monk in Thailand and how the experience changed his understanding of his bi-cultural identity. He adorned the walls with photos of ancestors, lit incense, and said Buddhist prayers to bless his writing. The result is A Chant to Soothe Wild Elephants, Coffin’s first book.

An eponymous poem opens this memoir. It expresses the ancient words whispered to the elephants captured to serve in the Thai King’s army. The poem is strikingly beautiful and, indeed, very soothing. On first reading, we thought it hinted at how, as Coffin travels between countries and cultures, he would meet people who ease his way and calm his questioning mind. We re-read the poem after finishing the book, and realized that it is also quite unsettling. Do you want the wild elephants to feel soothed? Or would you rather they run away from their new life, even if, as the poet promises, “through the palace flow streams where you can bathe and play”?

In fact, this poem, and the book itself, is not about knowing whether you’d rather be coming or going, prefering where you are or where you have been, or perceiving yourself as more firmly rooted in one culture than another. Instead, it is about living with not knowing the answers to these questions. A Chant to Soothe Wild Elephants shows where a journey of the mind, body, and spirit can take you, and how a search for answers can end, successfully, with acceptance of ambivalence and peace with the unknown.

Being ordained a monk is a rite of passage for Thai men, a rite Coffin decides to undertake. He makes the trip to Panomsarakram—his mother’s home village—as a 21-year-old. While there are several rules for monk living, and every morning begins with the alms round (a walk around the village to accept the community’s offerings of food), monastery life is surprisingly free of conformity and religious ritual. The experience is what each man himself wants to make of it—a rote fulfillment of an obligation, a holiday from real life, an opportunity for introspection, a chance to deepen one’s faith, an adventure. Coffin wants the experience to help him feel “more Thai”. He says, “I imagined myself as an ugly white caterpillar transforming inside an orange chrysalis”—his brand-new, orange monk robes.

Coffin longs to see himself with clarity and definition, and is jealous of a fellow monk and newfound friend, Narang, who was born and raised in Thailand:

His identity had a self-possession and symmetry that I’d always longed to find in myself. I just wanted to be able to look in the mirror and know that what I saw was an exact expression of how I felt. To have the half-features on a half-child living half-committed to two different cultures would never make me more than half sure about who I was.

At first Coffin, with some desperation, awaits a divine revelation about who he truly is. The black-and-white answer he seeks never appears. Instead, clarity comes in an unexpected form, from a monk who lives in the forest. He tells Coffin that the Buddha rests in a heart that is always mai nae ha—a “not-sure” heart.

Coffin writes in short, crisp, often powerful sentences, much like his literary idols Jack London and Ernest Hemmingway. The style matches the monk way of life—quiet, simple, clean. There is no flowery language or effusive descriptions, and Coffin’s prose never veers from its single-minded focus on his cultural identity quest.

Sometimes we wish it did. For example, Coffin speaks of his obsession with Buddhist thought, but never shares how faith motivates him in his life as a monk. We wanted to know more about his relationship with Buddhism, especially as he expresses doubt about the existence of karma and the power of meditation. You can never quite tell if Coffin would describe himself as Buddhist, or as someone who has a deep intellectual interest in the tenets of the faith. Given that this story hinges on Coffin’s experience as a Buddhist monk—and the close links between religion, culture and identity—it seems a strange omission, and it nagged at us throughout the book.

We also found ourselves struggling with Coffin’s contradictory statements about the experience of being a monk. Occasionally, he believes that he is acting like a monk instead of truly being a monk. At other times, he writes of the honor of standing before his mother as a monk and the feeling that, as a monk, he is on the path to a transcendent form of existence.

If you can live with Coffin’s seeming ambivalence about the entire rite of monk-hood and his lack on introspection into the role of Buddhism in his life, you will thoroughly enjoy this well-crafted, carefully-told story. In other words, read A Chant to Soothe Wild Elephants while cultivating your own acceptance of uncertainty and the unknown.