New Delhi, India -- Once in a while you come across a book that you know will remain in your mind, turning and curing well after you have finished reading it. 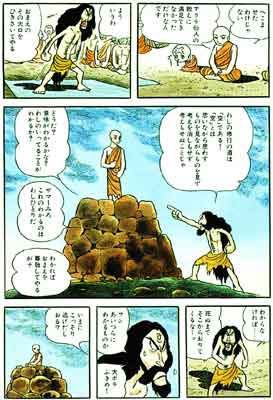 A book you would read slowly to make it last longer. Buddha, the eight-book masterpiece by Osamu Tezuka, the godfather of Japanese graphic art is one such. It is a book you would want to possess but not lend (also because it is rather expensive, tee hee!).

Tezuka, in his graphic novel, weaves an incredibly gripping story around imagined and real characters in the life of Buddha and keeps the reader spellbound with his racy storytelling and breathtaking sketches. The novel is a heady mix of fact, history, legend and fiction that brings ancient India to life. Tezuka’s spectacular narration and intricate sketches, done using cinematic camera angles, creates in the readers’ minds an illusion of watching a movie on Buddha.

Said to be Tezuka’s last epic, which he wrote for 10 years (!!) between 1974-84 (but translated and published in the US only in 2003-05 and brought to India by Harper Collins at Rs 295 per volume), the graphic novel has often been critiqued as being a “gritty and sexy” portrayal of the life of Buddha. True, Tezuka has taken liberties as a writer, but suffice to say the subplot created by him with characters such as Tatta, Migaila, Chapra, and Assaji serve to foreground Buddha’s character and message with extraordinary finesse and sensitivity. A rare portrayal indeed that makes Tezuka’s Buddha more memorable and moving than any other interpretation of Buddha’s life we might have seen or read.

Tezuka does not swerve from the original legend of Buddha where as Siddhartha he is forced to lead a cloistered life before he accidentally encounters the three inexorable curses of human life — disease, old age and death — and gets attracted to the path of renunciation. But juxtaposed with the life of Siddhartha and his transformation into Buddha are characters and stories that serve to showcase the social and political milieu of the day.

The stage is set in book I where, through the (mis)adventures of a Shudra called Chapra and an untouchable kid Tatta, the author establishes the social and political inheritance Siddhartha is born into. The iron grip of the caste system over king and subjects alike and the brutishness of the system is a recurrent theme, which horrifies the reader. Hence, when Buddha cures a scabrous Shudra woman by sucking pus out of her wounds, the extent of his humaneness hits home strongly. Be it the gut wrenching story of Devdatta (purely the author’s imagination) or the perilous life of Tatta (who as a child is the spitting image of Astroboy — another creation of Tezuka), be it the portrayal of the Indian caste system or the tussle for power between kingdoms and between father and son within a kingdom, the master storyteller has woven many different lives together in his book yet managed to keep the thread consistent and eventually tie it with the life and path of Buddha.

Two themes emerge repetitively, questioningly, even hauntingly. What happens to a human being when he is denied love or when his love is thwarted? Could the course of history be influenced by factors such as love and its denial? One wonders. But read Tezuka and you will teary eyed wonder if indeed Devadutta and Ajatasattu might have been less vicious creatures if only given their right to mother’s love and first love.

The other question is whether a bug’s life is any less sacred than a human’s. This question is made to take root in the reader’s minds, first through the story of little Tatta, who calls all birds and animals his peeps and has the special ability to get into the mind of any animal, and next through the story of Naradatta, the pacific monk who lives the life of a beast till his last days because of a curse. (Do not miss the picture of Naradatta where birds come in dozens to roost on his head, as if he were a tree!)

These threads of thought are not only skillfully dovetailed with Buddha’s own teachings but are also a much expected line of thought from Tezuka (also a doctor of medicine) who is said to have cared deeply for the animal world. He liked bugs in particular. Tezuka, who began drawing from his second year in his elementary school, created a pseudonym for himself in the fourth year by adding the Chinese character denoting “insect” at the end of his name, making his written name different while the pronunciation remained identical. Later in life, he would call his animation production company Mushi (insect) production!

Tezuka’s sketches reflect intimate knowledge of the flora and fauna of India (born of research no doubt). His drenching representations of Indian monsoons and ancient trees are simply awesome. The most cherished parts of the book are the wordless stretches where Tezuka through his pictures details how nature nourishes all living creatures through her food chain and prevails on them through the law of the survival of the fittest. The wordless montages leave you….well….speechless!

Coming to the language in the book, there is a generous sprinkling of swear words (but for them, schools could have used the novel as supplementary history text on ancient India!). Tezuka’s penchant for pun, humour and irreverent (anachronistic) remarks in the midst of serious conversations make the book a riot. For instance, Ananda a disciple of Buddha cries out, “How much longer must I seek to meet the ONE? A year? Ten years? The end of this series?”

Elsewhere a sentry who is bored with Buddha’s sermon mentions he would rather be home playing Mah Jong and at another point a guard states that only graduates from Tokyo University would be allowed to cross the gate!

Tezuka also dons short cameo roles inside the book. Purists may not appreciate these irreverent flights of fantasy, but ardent comic readers will completely enjoy Tezuka’s humour (I particularly like the laughter of his villainous characters that goes Hahaha-Muahahahaha, much like our Bollywood villains).

To sum up, the book is simply “fantastic….elephantastic” (to borrow a Tezuka expression). But then what do you expect from a man whose last words were, “I am begging you, let me work”?