Not an idyll but still a joy

London, UK -- When the young Sun Shuyun first considered travelling to Tibet for eight years' well-remunerated service to China's communist leadership, her father was angrily dismissive of the idea. 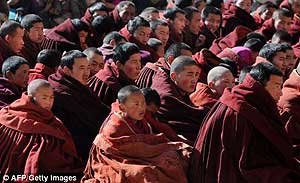 'For my parents,' she writes in the prologue to this sensitive and nuanced book, 'Tibet was a barbarous land where men drank blood and lamas made drums from human skin and horns from virgins' thigh bones; where serfs were treated worse than animals.

'Years of communist propaganda about Tibet's backwardness had convinced them of all this. I bowed to their pressure.' Two decades later, when Shuyun goes there to direct a year-long documentary project for BBC4, her Chinese friends are barely more encouraging. A prolonged stay at such high altitudes would irreparably damage her health, would lower her IQ and would lead to an early death.

How to reconcile such prejudices with Tibet's reputation as the place where the mythical, sublime kingdom of Shambhala endures in its mountain fastness? Or, indeed, with the prescient comments made by George Bogle, the first Englishman to enter Tibet at the end of the 18th century? 'I wish you [to] enjoy this happiness,' he wrote to the Tibetan people, 'which the advanced nations have already lost. When they are in the endless pursuit of their greed and ambitions, you live in peace and joy under the protection of the wilderness.' Arriving in Tibet in the autumn, Shuyun's crew focuses on various characters — a village doctor, a junior Communist Party official, a hotel manager, a rickshaw driver, a builder, two monks — in order to give a representative cross-section of Tibetan life.

Paramount among them are the Rikzins, a family that proves irresistible to the anthropologically-minded Shuyun: not only does it consist of three brothers and a single, shared wife (polyandry was banned under Mao, though it has made a gradual comeback since), but the youngest brother is the local shaman.

Even more importantly, the Rikzins live deep in the countryside. Some 90per cent of Tibetans eke out their precarious existence on the land, and yet 'the vast literature on Tibet rarely refers to them. It is among them that faith is still nurtured, the culture is maintained and tradition flourishes. This is the real Tibet'.

As winter draws in, Shuyun witnesses rituals that have hardly changed for millennia.

Hence, gods are everywhere in Tibet — in trees, flowers, crops, animals, houses, wells, woodpiles — and it is the shaman's duty to intercede with them on behalf of the common people. At harvest time, Tseten Rikzin is called upon to perform a long and complex ritual to ward off the danger of hailstorms.

(The Chinese government's hi-tech solution to the same problem is no less of an affront to common sense: an antiaircraft gun aimed at the clouds, supposedly able to disperse the hail before it falls.) When the shaman's aged mother dies, an even more protracted ceremony begins, one whose purpose is to ensure the departed spirit's safe passage through the perilous bardo or Tibetan afterworld.

Eager to be the first to film a 'sky burial', the grisly-sounding but highly practical disposal of corpses via vultures, Shuyun has to settle for watching one from a distance. It is an eerie and unforgettable scene, the village undertaker singing on a lonely outcrop as the body is dismembered and pounced on by the birds.

The recent protests over the Olympics and the subsequent crackdown by the Chinese government have made Shuyun's book even more topical than she might have foreseen at the time of writing.

If any criticism can be levelled at her project, it is that she skirts around the issue of China's overwhelming military presence in Tibet. While making it clear that life in modern Tibet is far from idyllic — alcoholism, for example, is rife — she does not explore the impact of long-term cultural repression on the psyche of the nation.

Yet what does come through ringingly clear is the Tibetan people's remarkable serenity even in the midst of terrible hardships.

As the shaman, quizzed by Shuyun as to his lack of disappointment at the poor harvest, says: 'Our rituals are really just the way we express our faith.

'We may or may not get anything in return. But that is not what matters most.

Buddhism is about giving. It is a virtue in itself, and brings its own reward.'