Book Review: Footprints in the Snow

San Francisco, CA (USA) -- I have never met Master Sheng Yen in person but I was blown away by his new autobiography Footprints in The Snow. The book is a story of a real person who struggles 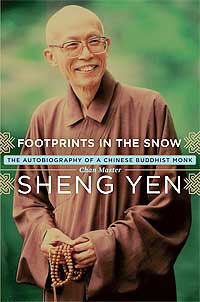 With his own handicaps [first walked at three years old, first talked at five] growing up in China in a poor family with the back drop of Japanese invasion followed by the Chinese revolution.

Modest yet courageous, truthful yet compassionate he lays his story out not sparing his own short comings or those of the Japanese, the nationalist or the communists and yet not demonizing them either.

Rarely is there an autobiography that just tells the story warts and all and yet demonstrates a wider backdrop of transformation. The mysterious yet grounded immersion in the religious life of a simple Buddhist calling.

The book spends over half of the narrative on his first 30 years, where his external story has more detail. The remaining years convey his struggles with his teachers and his own internal journey.

On a personal note coming from the Japanese Zen tradition I know of the many failings of Japanese Buddhism in its relationship to the Chinese, I was impressed that Master Sheng Yen held no grudges and could appreciate many positive Japanese Buddhist contributions. Sheng Yen, thank you for your biography, your life and your teaching!

-------------
Dairyu Michael Wenger received dharma transmission from Sojun Mel Weitsman and is the author of Thirty Three Fingers, a collection of modern American koans, and editor of the book Wind Bell. He is in charge of Dharma group support at Zen Center. He has practiced at San Francisco Zen Center since 1972 and is surprised and grateful that he is still here.