Beyond War And Peace With Poet Bruce Weigl

Cleveland, Ohio (USA) -- In his memoir The Circle of Hanh, poet Bruce Weigl wrote that the Vietnam war ruined his life and gave him his voice. But when he reads at the Bertram Woods Branch of the Shaker Heights Public Library, as part of the Poetry Not in the Woods Series, he doesn't plan to read war poems. 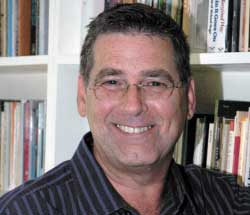 Instead, he'll read from a new collection, which is based on his Buddhist practice. This is no small transition for the poet, whose life and work have been shaped by the war he went off to fight when he was 18 years old.

Weigl spent a year in Vietnam, which he says is "absolutely" why he started writing. He had seen things that made him question everything. "I saw that a priest couldn't necessarily be trusted. I saw a priest blessing a cache of weapons." And poetry was a way to ask those questions. For him, like a generation of poets, the war gave him a voice and something to say.

Even two decades later, Vietnam continued to be a force in Weigl's life. In 1986 a friend invited him to visit the country again. He agreed, thinking the trip would never happen. "I had no desire to go. I had 20 years of nightmares. Vietnam was a war, as far as I was concerned. With that trip it became a country. Instead of mortars and grenades, it was children playing and beer. It was a huge turn in my life."

By then Weigl had earned a PhD and had become a professor of English at Penn State. Still, the war remained a dominant force in his work. A translation project, for example, came about accidentally when he discovered in a Boston library a collection of microfilm documenting papers on captured Vietnamese soldiers. Much of it consisted of soldiers' diaries, which contained poetry. With help from a librarian, Weigl started with literal translation, pouring himself into learning the language and refining the work over the next year to make the book, Poems From Captured Documents.

These days, Weigl is Distinguished Visiting Writer at Lorain County Community College.Ê He's written 12 books. He's currently working on translating a post-war-generation Vietnamese poet whose work he says has "no interest in the war at all."

Weigl's manuscript in progress, The Abundance of Nothing, was influenced not by the war, but by a near-death experience that he didn't recognize as such at the time. He developed a spinal infection, the seriousness of which he didn't know until he was already beating it. The experience made him think about the world without him in it.

"I avoided writing about my Buddhist practice for a long time," he says. "I don't like the sort of pseudo-Buddhist poems I've seen. I'm allowing that sensibility to come out."