The Buddha and Dr Führer: an Archaeological Scandal by Charles Allen

Sara Wheeler on the man who claimed to have found the Buddha's birthplace London, UK -- In 1898, on an estate between the foothills of the Himalayas and the Gangetic Plains, a third-generation British planter called William Claxton Peppé excavated an intriguing brick stupa. At 24 feet, he unearthed a hefty stone coffer containing five reliquary vases. Besides a glittering heap of jewels and gold, one of the vases held ashes. An inscription around the rim recorded that the ashes were the remains of the Buddha, and that they had been deposited by members of his Sakya clan. 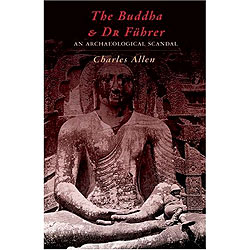 In this dense and quirky volume, Charles Allen unravels the saga of the discovery, a twisted tale of truth and lies that has divided Buddhist scholars for a century. He begins, quite properly, by reconstructing the forested Tarai landscape of the fifth century BC in which the Buddha grew up, material he touched on in his 2002 volume The Buddha and the Sahibs. The account of Peppé’s dig that follows includes a cast list ranging from civil servants to Sanskrit scholars and a maverick Bengali babu, as well as extensive and informative background material. One gripping passage reveals how the various prakrit or vulgar languages the Aryans introduced were formalised into Sanskrit, which went on to become the dominant literary language of northern India and Mahayana Buddhism.

Unfortunately, shortly after Peppé’s discovery, a German archaeologist called Dr Anton Führer, a former Catholic priest digging 15 miles away, was involved in an archaeological scandal. Führer had claimed to have discovered the Buddha’s birthplace at Lumbini, just over the border in Nepal, as well as the city where the young Buddha lived as Prince Siddhartha. The trouble was that Führer had been tangentially involved in the Peppé dig – an association that cast doubt on the authenticity of the vase and its ashes.

Allen suggests, plausibly enough, that the German “willingly suspended disbelief” in his desperation to find answers. “Führer wanted,” writes Allen, “to believe that the sacred landscape explored … in the fifth and seventh centuries still existed in that same idealised form in the last decade of the 19th century. So strongly did he believe this that he sought to make it so.” I would have liked more on Führer, as one ends up with little sense of the man.

Overall, though, as in his previous work, Allen displays a strong sense of narrative, conjuring shikaris bent over trenches in their enormous solar topees while a naked sadhu from the local temple looks on from the shade of a banyan tree, no doubt thinking all foreigners insane.

A comprehensive final chapter assesses the validity of the Peppé dig using carbon dating. In dealing with recent discoveries in the region, and with modern interpretations of the evidence, Allen covers the grim, yet hilarious battle, between India and Nepal over the true location of the Buddha’s birthplace. Unlike the respective tourist boards, he concludes that we don’t yet know where exactly the Buddha was born and raised, though Allen favours the Nepalese claim that the ruins of Tilaurakot by the river Banganga are the site of Kapilavastu. And he vouches for the authenticity of Peppé’s discoveries.

Allen is a distinguished author in the field; his previous books include Plain Tales from the Raj and Kipling Sahib. He is a scrupulous researcher who respects his sources. In these pages he pieces the story together like the shards of a broken vase while avoiding the Führer tendency to reach hasty conclusions. The Buddha and Dr Führer represents a personal mission to remove the stain of impropriety from an important set of archaeological findings, and Allen has achieved his goal with admirable rigour. The book is well illustrated with integrated maps, photographs and artistic images. None the less, this latest offering has a much narrower appeal than the author’s previous work, and its detailed analysis of archaeological history will discourage all but the most committed Buddhist scholars.
TOP