The Way of Zen-Masterpiece of Ideas

Carrollton, Georgia (USA) -- To be or not to be is not the question according to Alan Watts' "Way of Zen," because to "be" and to "not be" are opposites, which rely on the other state of being in order to exist. 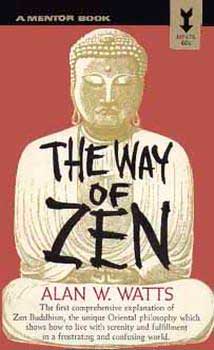 As one of the major books that brought eastern philosophy, namely Buddhism, to the west, "The Way of Zen" is one of the first to try to place names upon things that must remain unnamed. Because the Buddhist philosophy is traditionally an orally passed down ideal, before such books as this, it was nearly impossible for any Westerner to comprehend this philosophy. Now, thanks to Watts, it becomes a little more tangible.

I personally found "The Way of Zen" to be a masterpiece of blending not only culture, but also ideas. Watts uses analogies familiar to the western ear to describe concepts typically foreign to us. For example, the epithet that "The eternal Tao, which can be spoken is not the eternal Tao" is related to the familiar quote by Louis Armstrong: "If you have to ask, you'll never know." This is part of the brilliance of this work in general.

For me, to be told that in an ordinary setting would result with me throwing up my hands and saying-although perhaps not actually believing-"I never wanted to know anyway" rather than understanding that it is a more visceral experience than can be related by words. Watts somehow is able to relate this quality to someone like me, who relies on words, and therefore symbols, to explain why these symbols are not needed, and, in fact, not real.

What I have explained is only the tip of the iceberg. "The Way of Zen" is not an easy read, but well worth the effort. Not only will you learn about the concepts behind Zen, but also how it relates to typical western philosophy and perhaps your own.

Difficulty reaches a nine here. The concepts are extremely challenging, but the language carefully articulates the ideas. It's a trade-off.

Life-changing potentiality meets an eight. It definitely spins existentialism into a new web, as well as any ideas of opposites.
TOP