Buddha as blueprint for the perfect leader

Toronto, Canada -- The Dalai Lama is not someone most Canadian business people would turn to for leadership advice. Buddhism does not seem a natural fit with today's business world. Purple-and-yellow robes don't fit for most business occasions. 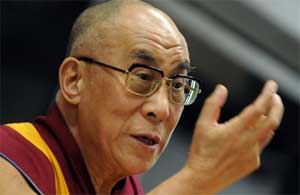 But the Dalai Lama is a leader - the spiritual leader for Tibet and head of its government-in-exile for 50 years. Although he once flirted with socialism, he is now a committed capitalist, thanks to an encounter with Mao Zedong, who derided religion. And he has just written a leadership book, along with international management consultant Laurens van den Muyzenberg, designed to help individuals make decisions in their careers and business life.

The monk and the management consultant, as they tout themselves in the introduction, alternate sections in the book, and although Mr. van den Muyzenberg is the one who delves most intricately into business matters, the Dalai Lama also displays a practical interest in business and Buddhism.

"At first glance, you might expect a large difference between business and Buddhism, but their common denominator is the importance they attach to happiness. A company that does not have happy employees, customers, and shareholders will ultimately fail," he writes.

The focus for Buddha was on why people were unhappy. He decided it was because they were self-centred.

The Dalai Lama notes that self-centeredness is also the cause of negative thoughts and actions, which can get in the way of a calm and collected mind. When you stop being self-centred - stop lying, acting aggressively, being arrogant or jealous, or resenting others - the reduction in that negativity will quickly lead to an improvement in your relationships with other people.

He urges you to install "an early warning system" - an inner voice that tells you when your state of mind is turning sour. Being alert to those moments will help you ensure that you do not lose control of your thoughts and emotions. Most importantly, you want to be careful if the negative thought process is very strong that you don't make any significant or irreversible decisions at this point.

The book revolves around two Buddhist concepts, Right View and Right Conduct, which again the authors argue is central to business decision-making today. The Right View relates to the intention behind your actions. Your intention must be good, meaning that ideally the decision will result in no harm. When an action must inevitably be beneficial to some individuals and damaging to others, you must make the utmost effort to reduce the harm as much as possible.

As well, your state of mind and that of the others involved in the process must be good. That means being alert to any negative emotions or thinking, such as defensiveness or anger. If such negativity starts to arise, you must try to return your mind to a calm, collected and concentrated state.

"When coming to the end of the decision-making process, leaders should ask themselves: Are the effects of this decision beneficial for my organization, and also for any others concerned? What is my motivation? Am I only looking for a benefit to myself, or did I also consider the benefits to others?" Mr. van den Muyzenberg writes.

But there's a second part of the equation: Doing the right thing, or Right Conduct. You must serve the needs of the whole organization and that of all the individual workers. Harm is to be avoided.

Of course, that's rarely possible. And while the Dalai Lama seems esoteric, he is actually a practical guy. He recognizes that in reality a decision may produce benefits for some but disadvantages for others. In those cases, choose the way that benefits the largest number of people.

Related to those two main concepts are a host of other subsidiary principles. Three of the most important are dependent origination, interdependence, and impermanence. Dependent origination is about cause and effect: Nothing exists, according to Buddhism, without a cause and nothing changes of its own accord. Translated to your office, this means when you make a decision you are initiating change, which in turn creates innumerable reactions, some positive and some negative. You can't possibly foresee the total impact of your decisions - the resulting chain reaction. "But leaders who have the right intention and are very thorough in thinking through the effects of their decisions will make fewer mistakes," the Dalai Lama says.

Interdependence approaches cause-and-effect from a different perspective: Focusing on our dependence on one another, something that easily translates to the business world. So does impermanence: The Buddhist notion that nothing exists that is permanent. It fits with the focus of reinvention and innovation in today's ever-changing global marketplace.

While many supporters of the Dalai Lama aren't comfortable with today's globalized capitalist marketplace, the Dalai Lama stoutly comes out for free-market capitalism in the book, as long as it is carried out with Right View and Right Conduct - adding a moral dimension to our economic system that includes concerns about distribution of wealth as well as generation of wealth. The great benefit of capitalism, he says, is that it allows for freedom and diversity of thought.