Bangkok, Thailand -- The Quantum and the Lotus: A Journey to the Frontiers Where Science and Buddhism Meet is a colourful exploration of existing knowledge on the mind and the universe that seeks to stretch its boundary by another notch. 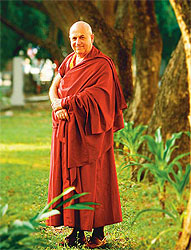 Here, French scientist-turned-monk Matthieu Ricard engages in an in-depth conversation with Vietnamese scientist Trinh Xuan Thuan on a wide range of crucial scientific issues, from the origin of the universe, the particles phenomena, the matter of time and the chaos theory to the emergence idea, artificial intelligence and even the paradigms of how to realise beauty and truth.

In one respect, the book is a product of its time. Recent years have witnessed a proliferation of works on the themes of "science and religion" or "science and spirituality" in both European and North American markets. Of note is a well-known series under the Mind and Life Institute, which, since 1987, has released several cross-cultural dialogues between His Holiness the Dalai Lama and a handful of leading Western scientists.

The translation of this book into Thai is one of the first steps to enable Thai readers to experience the beautiful dialogue between science and spirituality. Praises should go in part to the two translators - Kulsiri Charoensupakul, a professional translator, and Buncha Thanaboonsombat, a well-known scientist - for having rendered a highly complex subject into mostly clear and readable Thai prose. Their impressive translation of William Blake's famous poem To See a World in the Grain of Sand, printed on the back cover, is likely to become a classic in its own right.

A former molecular biologist, Matthieu Ricard worked at a prominent research institute in collaboration with top scientists in Paris before taking up Tibetan Buddhism and becoming a personal translator for His Holiness the Dalai Lama. Thais have already been familiar with him from two outstanding books: The Monk and the Philosopher (Orchid, 1999) and Happiness: A Guide to Developing Life's Most Important Skill (Suan Ngern Mee Ma, 2008).

Trinh Xuan Thuan was born in a Buddhist Vietnamese family, and spent his formative years in Europe and in the US. An active astrophysicist at the California Institute of Technology, his research interests are galactic astronomy and galaxy formation. A few of Thuan's scientific books catered for people with non-scientific background have become best-sellers and have been translated into over 20 languages.

The first chapter tackles head-on the differences between science and religion, albeit their ultimate goal of seeking the truth. Both Ricard and Thuan concur that the limitation of science is in its narrow focus, on knowledge, and not enough on the human quality such as happiness, ethics, and so on. Nonetheless, science is not evil by itself (can one say that the evil is rather latent in human nature?). Religion, on the other hand, is concerned about the practice of compassion and spiritual development. Complementary study of science and religion could thus pave the way toward greater realisation of truth.

Quantum and Lotus does raise hard questions - and lots of them. Did the universe have a beginning or is it merely a part of an infinite wheel with neither beginning nor end? How did quantum physics change our world view and the way of our life? What is the concept of truth and time? Is the perception of time only an illusion? What are the differences between worldly and ultimate realities? How did life and consciousness emerge from the complexity of vastly unknown relationships following the rule of interconnectedness? Is the consciousness study that reduces everything to brain basically unsound? If you are interested in such kinds of metaphysical questions, then this book is for you.

Through their energetic dialogue, the two writers give us an overview of knowledge map of both Buddhism and modern science before bringing us deep down to the new ocean of understanding where two streams of thought are intertwined. The enthusiastic Thuan sheds light on the modern scientific questions with adventurous examples drawn from lab experiments, whereas the calm and steady Ricard exchanges his ideas based on strong Buddhist practices and principles - the rule of interconnectedness and the logic chain of cause-effect. Their debate style is more constructive than competitive.

In the last chapter, Ricard argues how meditation goes beyond preoccupation with inner change, but also involves self-sacrifice for other beings. Meditation, says the monk, is more than leading a solitary existence in the midst of nature like birds or wild animals. Practitioners can help nobody if they do not understand the mechanisms of their own happiness and suffering. Last but not least, he affirms that being a good human is more important than being a devout follower. Spiritual development that emphasises ethics is thus of utmost importance and should not be restricted only to meditators.

The Thai version of this book is quite dense at times. Some chapters are admittedly difficult, especially for those without a scientific background. Of interest is the disagreement between the two authors about the beginning of the universe, which provides a good example of the differences in the two strands of thoughts. While the Western scientific mind is a result of Western philosophy based on the linear idea of the divine Creator, the Buddhist concept is built on the Eastern philosophy of the non-linear, cyclical Wheel of Birth and Death, which has neither a beginning nor an end.

Reading this dialogue-style book, one should be aware that the religious perspectives here are the viewpoints of Madhyamaka Tibetan Buddhism, and not Buddhism in its entirety. The scientific world views presented here are also a standpoint of an astrophysicist, and not the whole corpus of scientific knowledge. In the Western context, this book might be sceptically perceived as another Buddhist propaganda. Still, each topic of in-depth discussions could be verified rationally. The humility of both writers provides a cordial atmosphere for readers from either scientific or Buddhism fields to peruse at their own discretion.

One clear conclusion that emerges from reading this book is how to accept the "differences" and try to seek clarification as best as one can. Then one will be able to avoid the pitfalls of uncompromisable chasm or overt reconciliation of the basic principles that results in an impractical theory of everything.