San Francisco, CA (USA) -- This might be a good time for those who have not already done so to consider Buddhism. I am no proselytizer of religion, but there is a great deal to be learned from the teachings. 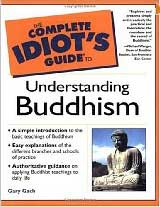 If, as I do, you look around in dismay at the hierarchies that seem to dominate our planet and our nation, you may stand to benefit from the non-attachment and the equanimity these teachings invite us to consider. You, as I, may have watched in sadness and bewilderment the stalemate of what purports to be our government, the disasters -- both natural and man-made -- that beset us, the stubborn denial of the human species in the face of its own ignorance, indifference, and outright cruelty, too often in the name of religious fervor. Like me, you may find these to be times when despair and withdrawal seem to be the only rational answers.

Time, then, perhaps, to pick up your copy of The Complete Idiot's Guide to Buddhism by Gary Gach (Alpha Books, 2009) (This is a revised version of The Complete Idiot's Guide to Understanding Buddhism.) For some time now I have labored under the misapprehension that I had already published my thoughts about this useful and engaging handbook, but a search through my computer files finds no mention, and this revised edition has already been out for months. It's time to correct my omission.

There are, it's true, much shorter and much less demanding guides to Buddhism on the market. But most of these serve only to reduce their subject to its simplest outlines. This book does not. It looks at Buddhism from every angle; its origins in the life story and the teachings of the Buddha, and how they come down to us; the history of the spread of the religion to different parts of the East, and finally to our own hemisphere; the variety of its manifestations, including Tibetan Buddhism, Zen, Theravadan, and Pure Land; its similarities with other religions and its differences; the core teachings themselves -- the Four Noble Truths, the Eightfold Path, the Precepts, and so on -- and not least their application to everyday life; and the basic practice of meditation, with ample examples of the huge variety of how-to's.

All of which may sound intimidating, but Gach makes the journey a pleasant and often light-hearted one. His narrative is filled with parables and poems (Gach himself is an enthusiastic translator of haikus), illustrations and engaging side trips into pithy expressions of wisdom by the great master teachers. And the truth is that this is not a simple subject, though many in the West have attempted to make it so, reducing complex thought to simplistic clichés. Gach is careful with detail, respectful of both the religious and philosophical complexities of Buddhist thought and practice. His book deserves to be read with the same careful attention; it is not one to read cover-to-cover, but one that asks for time and patience. It will reward those who bring that attention to it, not really "Complete Idiots," but rather those with a curious bent and an open mind, ready to learn from what is a serious source of the kind of human wisdom and compassion sorely needed in a world that becomes increasingly vulnerable by the day.

The precious and I think perhaps unique quality of Buddhism is that it specifically rejects the fanaticism that other religions seem unfortunately to foster; what it offers instead is the rational alternative of a Middle Path, respectful of all life and insistent at its core on the principle: Do no harm. Gach's book will serve you as a comprehensive, thoughtful and intelligible guide.