Petaling Jaya, Selangor (Malaysia) -- In 1991, Natalie Cole resurrected a famous duet with her late father, the great Nat King Cole. The song "Unforgettable", became an international hit and won several Grammy awards, including Album of the Year and Record of the Year. 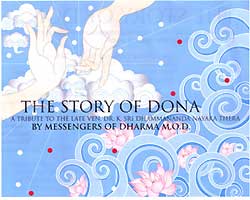 << The story of Dona is a song about a brahmin named Dona who was eager to know who the Buddha really is. This song is a tribute to the late Chief Rev. Dr. K Sri Dhammananda Nayaka Maha Thera.

The result is an inspiring rendition of "The Story of Dona", based on the Dona Sutta of the Anguttara Nikaya ("Gradual Collection" or "Numerical Discourses", the fourth of the five pali nikayas).

It is believed that such a composition is the first for a Malaysian effort.

MOD founder Cedric Tan said that the song came together much by accident. After hearing the rough cut produced by Leonard Tan, MOD decided to take it up as a group project.

With some funds raised among friends, MOD then brought the compilation up a notch higher through collaborations with professional audio mixer, Greg Henderson. The overall work was further enhanced with the sound of the sitar humming exotically in the backgraound, adding a sensitive, ethereal effect.

"The Story of Dona" is a must have collection for anyone who appreciates Dharma inspired music.

About the story of Dona

The Story of Dona dervied from Dona Sutta (Anguttara Nikaya) unfolds with the Brahmin Dona trailing the Buddha who is walking mindfully from Ukkhatta to Setabya.

The Brahmin is awed by the thousand-spokes-wheel imprint in the Buddha's footprints and becomes extremely curious about it.

At the rest area, the Brahmin approaches the calmly seated Buddha and enquires if He is a god, celestial minstrel, nature spirit or just a plain human being. The Buddha denies categorically He is any of the beings mentioned as He has discarded the very roots of rebirth as any of these beings (or for that matter any other beings as well).

The Buddha likened Himself to a lotus blooming out of the muddy world and is unsoiled by the very nature of this world of rebirth. Thus He has 'Awakened' or attained 'Buddha-state.'

The songs in this album was inspired by a video recording of the late Ven. Dr. K. Sri Dhammananda entitled The Power of the Mind in which the late Venerable spoke about the very nature of the Buddha.

The late Venerable noted that till today, many people misconstrued the Buddha as a highly God-like personality while others thought that He was a normal human being.

This song, with the cleverly inserted snippets of the talk, weaves the story of how the Buddha explained this very highly developed nature in a simple manner.