Journeying through the Buddhas path

Kajang, Selangor (Malaysia) -- March 22, 2008 is a historical day for Kajang Buddhist Centre (BMSM Kajang Branch). This Centre, which used to be an old cinema till the 1980s, had the opportunity to use its “once-upon-a-time props” to host a memorable event – the launching of the album Journey by M.V. Nathan & Friends. It was also a day in history for Bro Nathan, for what started as a formidable endeavour has finally come to fruition. 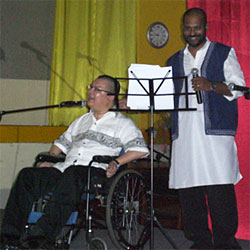 Befitting the title of the album, Journey, Bro Nathan’s endeavour to spread the ancient message of the Lord Buddha through music is indeed a journey.

In 2003, he undertook his wobbly but determined first step of his journey, when together with the Xpounders, he produced his inaugural album called Journey to the Temple.

In 2004, Bro Nathan recorded his second album, Love, Kindness and Forgiveness: Transcending Boundaries, followed by his third album, Ti-Sarana: Taking the Three Refuges, in 2005. Three albums produced consecutively, each with its respective theme, but bound by the same aspiration - to inspire listeners to remember the Lord Buddha, and to walk the ancient path of the Buddha Dhamma in our everyday lives.

Possibly pondering on the common thread that binds all his three albums above, Bro Nathan began to work on his fourth album in 2006, once again, attempting to encourage listeners to reflect on the Lord Buddha’s ancient message – strive diligently to free oneself from the life of bondage, samsara and gain the final bliss, nibbana.

A project that took almost 30 months to complete, the final product appropriately titled Journey: Bondage and Freedom was a force to be reckoned with. For, to produce this album, Bro Nathan has called on board his “old” friends, who are renowned singers and talented musicians in their own capacity. Basking in the company of fellow Melakans, fellow Wayfarers and contemporary ‘kalyana mitras’, Bro Nathan’s Journey contains beautiful hymns of joy and praise, expounding the virtues of our gentle Teacher, the purity and efficacy of the Buddha Dharma, as well as exhorting listeners to make the right aspiration – to strive to be free from the fetters of desire and the bondage of delusion, by emulating the Buddha’s deeds and virtues.

This album, Journey, is a three-in-one. It has two CDs and one DVD. The first CD features ten songs, nine of which are taken from the “Buddhist Hymns” book compiled by Datuk Dr Victor Wee. The tenth song, “Chief”, written by Bro Nathan, is a moving tribute to our late Chief, Venerable Dr K. Sri Dhammananda Nayaka Maha Thera, who passed away on August 31st, 2006. Most of the singers featured in this first CD are experienced singers and musicians. However, credit is due to Bro Nathan, who courageously invited several “enthusiastic but totally inexperienced” students from the Kajang Sunday Dhamma School to perform one song, “Tiratana” with him. Many months of training under the skilful guidance of Bro Nathan has transformed the “greenhorn students” into “boleh tahan” singers!

The second CD is a recital of the “Maha Mangala Sutta” (Sutta of the Highest Blessings) by Venerable K. Nanda, who unhesitantly said yes to Bro Nathan’s invitation and flew from the US to record the Maha Mangala Sutta even though the Venerable was not feeling well at the time of recording.

The DVD is a bonus feature on this album Journey. It is a video portrayal of our late Chief, Venerable Dr K. Sri Dhammananda, as a personal tribute of Bro Nathan, who regards the late Chief as his mentor and spiritual teacher. As Bro Nathan mentions in the Foreword of his album, many people in the Buddhist community would have felt a glaring vacuum left by our late Chief. Adoringly regarded as a great beacon of inspiration, our late Chief has left behind his legacy of the Buddha Dhamma, delivered with immense wit, warmth and wisdom.

On the evening of the launching of the album Journey on March 22nd, 2008, it was raining heavily. Fortunately and fittingly, the skies opened, and the rain stopped, just half an hour before the event was to begin. Smiles of joy and happiness radiated on the faces of the hosts, including Bro Nathan’s - they were beginning to feel concerned the rain might discourage people from coming to this “out-of-the-way” Kajang Buddhist Centre. At first, the crowd trickled in, but as the minutes ticked by, more people came and the one-time cinema might have felt it was like the good-old-days when there was full house for a movie it was screening. Indeed, the rain came as a blessing, for the full moon, freed from the rain clouds, seemed to shine even more brightly!

Despite the uncertain arrival time of Datuk Dr Victor Wee, who was given the honour to officiate and launch the album, the audience remained unperturbed, patiently waiting and enjoying the antics of the emcee, Bro Simon Tan, who was trying his very best to entertain the audience without a script.

Venerable Dhammasidhi led the puja, paying homage to our Blessed One, the Lord Buddha, and seeking His blessings for the memorable occasion. Datuk Dr Victor Wee delivered his speech in which he recounted the history of hymn singing and album making, and noted the milestones achieved in recording technology and the sophistication involved in album production. Song recording has indeed come a long way, and Datuk Dr Victor Wee’s speech showed us the Dhamma taught by the Lord Buddha, of impermanence, and of the wisdom to take change in our stride. The lighting of the traditional oil lamp after the launching of the album by Datuk Dr Victor Wee, is a gentle reminder to the audience to remember our Lord Buddha, the Perfectly Enlightened One, as the “Bringer of Light” (Anguttara Nikaya 1: xiii). We, who are still wandering in the darkness of samsara, when we undertake to walk the Buddha’s path, will one day, gain enlightenment as did our Blessed One. The oil lamp also symbolises the warmth
(meaning love, faith and confidence) we can feel when we heed the Buddha’s teachings.

Most of the singers of Journey, came to lend support to Bro Nathan during the launch, and each of them performed “live” for their respective songs, so as to give a taste to potential listeners of what they could expect from the album. Messengers of Dhamma (MOD), D2Y, Bro Oh Kim Leng and Bro Raymond Yeo (both of them specially made the journey from Melaka to Kajang in the spirit of great brotherhood), Bro Khoo Nee Wern, Datuk Dr Victor Wee, Bro Kumar and Bro Prakash, not to mention Dharmic Dew (students of Kajang Sunday Dhamma School), mesmerised the audience with their heart stirring renditions of their respective songs. Kota Kemuning, who like Kajang Buddhist Centre, is a branch of the Buddhist Missionary Society Malaysia (BMSM), came to give familial support by sending a singing team to grace the occasion.

The evening ended with the screening of the DVD, Chief, which had a recording of Bro Nathan’s rendition of the song he personally wrote, Chief. Our late Chief, Venerable Dr K. Sri Dhammananda, has a special place in the hearts of the members of Kajang Buddhist Centre in particular, for our late Chief Reverend had on many occasions, went out of his way to be at Kajang Buddhist Centre for many of its activities. Hence, seeing our late Chief’s face, hearing his voice, especially his “infectious” laughter at the end of the video – it was a poignant moment which left many in the audience, teary-eyed. It seemed like yesterday the Chief was with us. Once again, the night reinforced the Dhamma lesson on impermanence for the audience!

Proceeds from sale of the album Journey go to the respective temples and buddhist centres that sell the album.