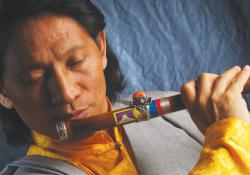 Using his music as a vehicle, Khechog said, “My most important work is to make people aware of what is happening in Tibet….How its culture is founded on non-violence and compassion and how it’s important to try to save it.”

Along with his peaceful, meditative music, Nawang recently released his first book, “Awakening Kindness,” with a foreword written by the Dalai Lama. The book extols the importance of kindness as a source of lasting happiness, joy and as a way to give our lives meaning. “It is time to say to the world, love and compassion are valuable,’” Khechog writes.

For the last 20 years, Khechog has begun his musical performances with “May All Be Kind to Each Other,” a simple, down-to-earth yet powerful message endorsed by 10 Nobel peace laureates, including Archbishop Desmond Tutu.

Born into a nomadic family in Eastern Tibet, Nawang’s family heeded warnings and fled Tibet prior to the 1959 Chinese invasion. The family traveled thousands of miles by yak to India, with several perishing on the journey.

For 11 years, Nawang was a monk, studying Buddhist philosophy and meditation with the Dalai Lama and other Tibetan masters.

Now, music is his vehicle to inspire non-violence, compassion and spirituality, while speaking out for freedom of the Tibetan people. Having produced several albums, one nominated for a 2000 Grammy Award, Khechog has performed over a dozen times at Carnegie Hall and has collaborated with musicians including Phillip Glass and David Bowie, and performed with U2 and Dave Matthews. His music is part of the “Seven Years in Tibet” film soundtrack.

A self taught musician, Nawang will also play an instrument he invented, combining a Tibetan long horn, didgeridoo and a trombone. When he first played the instrument at Carnegie Hall, “The crowd went wild,” he said.