WORLD music brings together the most unlikely combinations of talent

Mullumbimby, Australia -- Four Buddhist monks from Tibet were performing on the north coast of NSW when they were approached by a German musician and producer who owns a studio near Mullumbimby. 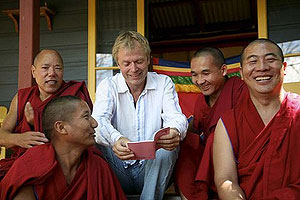 << All together now ... music producer Kamal Engels with the Grammy-nominated Gyuto monks at his recording studio in Mullumbimby.

New Earth decides one of its releases, a collection of Christian and Buddhist prayers featuring Tina Turner, might stand a chance of winning a Grammy.

All together now ... music producer Kamal Engels with the Grammy-nominated Gyuto monks at his recording studio in Mullumbimby.

They submit it and, just for luck, throw in a copy of Pure Sounds, the aforementioned album by the Gyuto monks of Tibet which was recorded in Mullumbimby by that German producer-musician, Kamal Engels.

Here's the funny bit. The star-studded experiment, Beyond, is overlooked but Pure Sounds is nominated for Best Traditional World Music Album.

The result: recordings by Keith Urban and the Gyuto monks of Tibet are the only two Australian projects in the nominations this year.

Pure Sounds was an accident, as Engels explains: "I was working on a production for my American label, New Earth Records, called Zen Mama. I wanted some traditional Tibetan chanting on it.

"After the recording … I wanted to offer them the chance to record chants of their choice and put an album together so they could print maybe 500 copies and sell them when they were travelling. We recorded the album and it turned out so well that I suggested they try to get it released by my American record company."

Engels, who studied audio engineering at the music conservatory in Dusseldorf, came to Australia 17 years ago.

Unfortunately, if the Gyuto monks win there will be no one at the Grammys to collect the award. It is too expensive for them to travel to Los Angeles and only the artists are allowed to collect the trophy.