Rise Of The Planet Of The Apes & Conscience?

Singapore -- ‘Rise Of The Planet Of The Apes’ is a terrific wake-up call, and a timely one too, for highlighting the impending dangers of cross-tampering with human and animal genes. What happens when human intelligence evolves faster than wisdom? 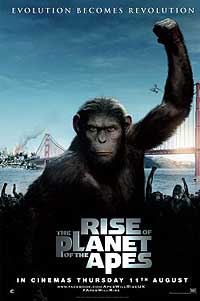 This could be it. But it would be a big mistake to assume that this is what the movie is all about, for it challenges our perspective of humans’ relationship with animals in other multiple ways too.

Because Caesar the ape out-evolves his counterparts in terms of intelligence and sensitivity, it is as if he becomes more of a human and less of a primate – and this forces the audience to confront the issue of speciesism. For animals can indeed be more human in nature than we assume, and if so, who are we to lord over them, and subject them to experimentation, exploitation, and ultimately, slaughter?

Do we need a real-life Caesar, for evolution to become revolution, before we think twice about discrimination against other fellow sentient beings? If otherwise natural evolution is sped up artificially, and if animals out-evolve us, will the karmic tables be eventually turned? Perhaps animals will come to lord over humans instead? In the mean time, is domestication not a form of incarceration, even if those trapped seem compliant or resigned?

Caesar grows up to be smart enough to realise he is discriminated, seen as a dangerous beast, and that he is actually somewhat a pet, to be kept in control. But we are also reminded that the line that divides humans from beasts is indeed blur when Caesar’s fierce animal instincts to protect a human caregiver spins out of his own expectations. This led him to be withheld in an abusive primate compound.

Animal-nature can be tamed, but how much? Then again, some humans behave like savage animals too. Are we more similar or different? Aren’t humans who systematically and continually breed and enslave animals already somewhat savages? At least, animals don’t do this to us. At least, Caesar does become regretful of having harmed a human, and is mindful not to do so again, unless for defence. He is at times more humane than the humans after him!

The problem of discrimination is portrayed realistically, to be more rampant than we might have imagined. Speciesism is indeed an inter-species phenomenon. (Then again, within a single species, such as the human race, there is racism and such too.) Caesar, despite being with more or less of his kind, is discriminated by the other primates at first, before he wins respect with his strategic moves.

Due to his intelligence, Caesar becomes the default leader of the primates. Though they do not share a common language, they all crave their basic right for freedom, and he leads them to it. Self animal liberation! Just when you might assume Caesar to be a nasty ambitious fellow, who might wish to lord over humans, well, all he wanted, at least for this instalment, was to lead his gang to a vast natural reserve – to safety and freedom.

In the Buddha’s teachings, he urges us to see all sentient beings with the eyes of equanimity, with universal kindness. The worthiest and truest form of evolution, surely, is to evolve spiritually, to perfect our compassion and wisdom. The good news is that all sentient beings have Buddha-nature, the potential for perfecting spiritual evolution. All of us, be we humans or animals, can become Buddhas. Eventual as Buddhahood might be, may we evolve in its direction more swiftly!