A Bodhisattva 'Man Of Steel'?

Singapore -- Like a skilful transcendental Bodhisattva whom, as instructed by the Buddha, does not reveal his identity - so as to better enter and blend into the worldly masses and protect relations, Superman functions almost anonymously despite his obvious helping of many and saving of lives. As his foster father explains, people are afraid of what they cannot understand. 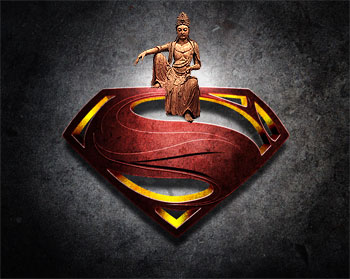 Yet, paradoxically, there is the healthy proud display of his family crest as a signature to inspire. All of his acts as Superman has to be aligned with goodness for this inspiration to perpetuate. His foster father also reminded him from young to solve his existential koan, to find his raison d'être, even if it takes the rest of his life. Good advice for everyone, alien or human. Of course, nothing beats the resolution live up to Bodhicitta for life!

Like the great Bodhisattvas, Superman keeps his identity secret, to let others focus on his good example and nothing else that distracts. He swiftly flies off after rendering assistance. He also created the persona as mild-mannered journalist Clark Kent as a cover. It is the Middle Path that he straddles - being of this world yet out of this world. As he does not offer direct Buddhadharma, there is a limit to his heroism, showing no spiritual path to break free from the cycle of birth, ageing, sickness and death.

Jor-El's consciousness from Krypton explains to his son Mon-El (Clark Kent/ Superman) on his lineage, 'The people of Earth are different from us, it's true. But ultimately, I believe that's a good thing. They won't necessarily make the same mistakes we did [which destroyed Krypton out of deluded greed and hate]. Not if you guide them, Kal. Not if you give them hope. [He shows the 'S' crest on the chest for the Superman suit.] That's what this symbol means. The symbol of the house of El means hope. Embodied within that hope is the fundamental belief in the potential of every person to be a force for good. That's what you can bring them.' The speech is reminiscent of the inner hope of Buddha-nature within all sentient beings, alienated or not, that potential for spiritual purity, that Bodhisattvas wish to awaken us.

When growing up, Clark had to grapple with what seemed to be overwhelming sensory bombardment due to his ability to see with X-ray vision and to hear beyond human capacity. His foster mother taught him to focus his mind, to rein in his powers instead of letting them run astray. This reminds us of the Surangama Sutra teaching of 'gather[ing] in the six [sense] roots, with pure mindfulness of Buddha in continuous succession to attain Samadhi [meditative calmness and concentration].'

Mindfulness of his Buddha-nature and that of others, even the villains he fights, will be what differentiates Superman from them, for he sees the hope that they too can become noble, if only he, but more importantly, they, give themselves a chance to awaken to their inner goodness. Superman's great reluctance to kill even the evil was illustrated by his regret at having have to kill the unrepentant General Zod as a last resort to save the innocent. His emotional anguish was as intense as Bruce Wayne's sorrow when his parents were killed! Heroes being who they are, they eventually transform such pain to motivation for doing greater good!