As an action/sci-fi flick, The Matrix is a total thrill-fest, combining badass Kung Fu fight scenes with the sole reason you wanted a black trench coat for a while. It was one of the most exciting films to come out in the 90's and introduced mind-bending ways of making movies. 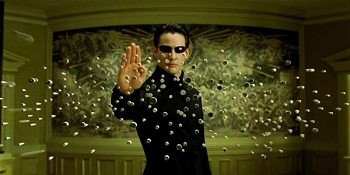 But as a work of art, it’s utterly ripe for insane amounts of analysis. Film students or just general enthusiasts can spend months, or even years focusing on aspects of it; dissecting it scene by scene and line by line, looking for cryptic clues and complex meanings. Even though most people just want to see a fast-paced film where Keanu Reeves wears sunglasses and has two hair styles, there are others who read so much in between the lines that they’ve gone cross eyed.

Of all the theories out there, there’s one which not many people are aware of. And that is that the Wachowskis – either by design or by accident – wrote and directed a film that’s actually about the teachings of Buddhism.

Yep. You read that right. One of the most popular actions films in recent cinema history has a deeper meaning that teaches peace and enlightenment. Don’t believe us? Here’s why we think so.

Right off the bat we have Keanu Reeves as nerd-cum-saviour of humanity, Neo. If you rearrange the letters in the character’s names, you can spell the word “one.” In fact, Neo is referred to as The One throughout many parts of the film. It’s no coincidence then that his alias is an anagram foreshadowing his own destiny.

Of course, this sounds like a bit of a stretch. After all, there are plenty of films throughou history that have a central character referred to as the one, or a prophet, or even the saviour of human kind.

So, how does this relate to Buddhism then? Much of the Eastern philosophy reflects on the desire for people to become at one with the world; to empathise with everyone and everything on Earth (possibly the universe). Now, it’s true that Neo doesn’t exactly show his most peaceful side throughout the film, but him being a chosen one does elevate him to a sort of messianic status to become the leader of a more free world. Similar to Buddha himself.

6) Awakening In The ‘Real World’

What’s even more interesting about Neo being an anagram of “one” is not only the fact that it relates to who he is in relation to the film (a prophet who has come to save the world), but how it references another very key part of Buddhism, specifically Buddha himself.

As the founder of Buddhism in 520BCE, Siddhartha then became known as the first Buddha. The word itself literally translates to “the awakened one.” Now, you don’t have to skip too many scenes in the film to see how this is relevant.

Much of The Matrix involves Neo/Mr Anderson coming to terms with the fact that the world he lives in is an illusion and that he must wake up so he can experience the true world. Fulfilling an ancient prophecy, he is taken down the “rabbit hole” and shown the truth about the world. He is literally a modern version of one who has awakened to a more enlightened state – a reincarnation of Buddha in our contemporary period.

Let’s examine some of the core philosophies of the film. It’s apparent how Neo can be seen as representing a sort of reincarnated Buddha figure, but what about the rest of the film? One of the main teachings that Morpheus imparts to Neo is that the world in which his alter ego Mr. Anderson lives does not actually exist. He tells him that it’s an illusion, in which your mind simply interprets the other signals (touch, smell, etc.) and creates the world as a sort of virtual reality setting.

In the world that we know and live in, there is corruption, anxiety, stress and material desire. In the real world of The Matrix, there is freedom. Albeit it’s not exactly nirvana, but the characters in the film continue to insist that they have been set free by Morpheus. Neo was freed to protect the world, release others from their mind prisons and prevent further suffering (what Buddhism refers to as “Samsara”).

He can also never go back. Much like not being able to unsee something once you’ve witnessed it, a person who is awake can never be “un-awake” again. The scene in which Morpheus tells Neo this is interesting in that he also talks about a man who saw the world as it was; who freed the first people. Sound like someone you know? I’ll give you a hint. His name starts with a ‘B’.

The Matrix is a rare treat in that it successfully blends Western attributes with Eastern ones. Take the famous lobby scene for example, in which Neo and Trinity gun down a room of security guards. An interesting point to make at this stage is how Trinity’s name could easily relate to The Holy Trinity in the Christian faith. She obviously represents Western philosophies while Neo represents the East.

Taking Buddhism into account, we see Neo being trained by Morpheus in various forms of martial arts, a traditionally Eastern self defence technique. While this doesn’t relate entirely to its teachings, there are a sect of Buddhists who do practice the art. Martial arts is not only about learning to fight, but also about mastering ones own mind and body. Both mind and body are a key aspect to the teachings of Buddha.

There is also a very Eastern feel about the training dojo sequence. Morpheus takes on the role of master and engages Neo in combat, asking him to show how much he has learned. The entire sequence is reminiscent of one of many martial arts films and is a huge step away from the ‘guns blazing’ methodology that many action films prefer (though we do see this later on).

Now, the idea of someone dying and being dead for the rest of the film is not something you can link to Buddhism. Death is final. You don’t need teachings or philosophies to be able to know that. What can be linked, however, is the idea of dying in an imaginary world.

During Neo’s training, he is taken to the top of a skyscraper and asked to leap from one roof to another. Failing the first time and plunging to the ground, he is extracted from the matrix world and re-emerges in the real world. Noticing his mouth is bleeding (despite the training occurring in a virtual realm), he questions Morpheus.

“I thought it wasn’t real,” he states.

He then informs Neo that were he to die in the fake world, he would die in real life, saying that “the body cannot live without the mind.” This again brings to light the Buddhist ideas of how important the mind is. By training it, resting it (via meditation) and basically not dying in the matrix, a person can master it.

In fact, we even see this put to the test in one scene where several of the other characters (all of whom have been inserted into the matrix program) have their outside life support plugs removed. Dropping like flies, this shows that Morpheus was indeed right; that dying in the fake world is the same as dying in the real one.

One of the most recognizable beliefs about Buddhism is the idea that a person is reborn after their physical body expires. You don’t need to know anything about the philosophy itself to be able to describe, even vaguely, what it means to be reincarnated. And yes, The Matrix features it. Twice in fact.

The first instance is when Neo first wakes up in the real world to find himself cacooned in a pod attached to tubes. While in this instance he hasn’t been reincarnated after death, it is still a rebirth in some form. More astute film buffs and students will argue that death has occurred in a very metaphorical sense, in that Neo’s perceptions of the world he once knew are now dead and new insights have been born.

The much more obvious example is right at the end when Neo is disposed of by Agent Smith. While death is indeed permanent, Neo awakens once more from ultimate demise and is reincarnated into The One, exactly how Morpheus has been referring to him throughout the film.

At this point he now sees how the world really is (green code that a person must decipher). He battles Agent Smith with a calm demeanour and utilising his Kung Fu skills. In this instance, he has obviously reached a state of enlightenment; essentially the ultimate goal of Buddhism.

While Neo is clearly supposed to represent Buddha (or at least Buddhism at its core level), it can be easy to gloss over the idea for one simple reason: he doesn’t much look like the leader of one of the oldest Eastern philosophies in the world.

All theories can be thrown out with that basic observation, but if you want even more evidence that The Matrix is more than just a nod towards Buddhism, you can clearly see it in the scene where Morpheus takes Neo to see the Oracle.

While sat in the waiting room, Neo sees several children who are quite clearly gifted (one child is seen levitating letter blocks above her head). One notable character is the bald boy who is seen bending spoons with his mind. He hands the spoon to Neo and imparts not only great words of wisdom, but also the most famous line from the film.

He tells him that he cannot bend the spoon with just his mind and that he must realize the truth. “There is no spoon,” he says. Dressed in traditional Buddhist garbs and with no hair, the young boy could easily be mistaken for an ordained monk. His words speak a great truth and his calm expression suggests he too has been set on this path of discovery. Like Neo, he has been set free from Samsara.

So, now are you convinced?