From Mood Indigo To Mood Mono?

Singapore -- Titled after a 1930 jazz song by Duke Ellington and company, ‘Mood Indigo’ was originally titled ‘Dreamy Blues’. As many jazz pieces are, it is bittersweet, though arguably more bitter than sweet due to its renaming. Then again, jazz music is famously up for personal interpretation. 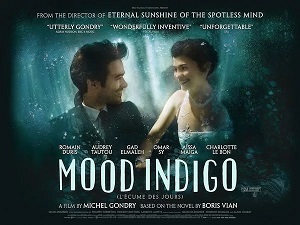 The ‘Mood Indigo’ movie first portrays an impossibly dreamlike, colourful and fun world… of utter absurd delights paired with extravagant waste. Picture exotic dishes eaten with used plates simply swept off the table. Painting a whimsical world of possibilities limited only by imagination, such was the life of Colin, heir to a fortune, who needed not to work a single day.

Just when things already seem overwhelmingly ‘wonderful’, Colin falls wonderfully in love with Chloe, and their courtship scenarios get even more bizarrely wondrous. However, soon, the film set becomes a bleak monochrome world of utter despair, when Chloe develops a strange sickness. As money runs out to seek a cure, the colourful possibilities run out too, as the gloom and doom of death from (ageing or) sickness become more and more certain. All the absurd money Colin had was not enough. Chloe had a water lily growing in her lungs, that had to be kept at bay by surrounding herself endlessly with flowers that swiftly wither.

There seems to be a Buddhist parallel, with flowers representing impermanence, that are destined to blossom only for a brief respite. Like us, Chloe was flowerlike, with not long to blossom. Although fantastical, this stood for how the existentially absurd can and does happen. (The spoof of Satre as ‘Patre‘ appears, dying an ‘absurd’ death too, though Buddhists would see it as karmic. He was killed by one so obsessed with his writings, that he forgets the ‘living’ they were to inspire.) Yet, absurd as things might seem to us the unenlightened, we must take them seriously enough to make sense of them, or our lives would be even more absurd.

Earlier, on the brink of confessing love on a park bench, Colin says, ‘I feel a weight on my chest. A pressure. Like my life depends on this moment.’ Chloe asks, ‘This moment right now?’ Colin replies, ‘Yes. And if I screw up…’ Chloe assures, ‘I think the opposite. There are two of us, so if we screw up this moment, we try the next, and if we fail, the next. We have our whole lives to get it right.’ Here is the existential paradox… Everything coming depends on this moment, yet there is always the next coming, though the same contexts, as lost or squandered opportunities are hard, if not impossible to regain. Such is life, that keeps us on our toes.

We do have the next moment, and even the next life. Yet, as Stonepeace put it, ‘You have forever to break free of birth and death. But if you take forever, you are forever trapped.’ This again reminds us of how pivotal this moment in this life always is. Like Colin and Chloe, we have to find our meaning in time to live on better, and to love on truer despite the dread of loss. We have to seek our most satisfying yet liberating bliss… now… till we attain it… later. Chloe was wrong in assuming they had all the time in the world to get it right, not expecting how just a single absurd flower blooming in one of them could could make their relationship short-lived.

So sings the ‘Mood Indigo’ song – ‘… You ain’t been blue ’till you’ve had that mood indigo, that feelin’ goes stealin’ down to my shoes… Always get that mood indigo since my baby said goodbye. In the evenin’ when lights are low, I’m so lonesome I could cry. ‘Cos there’s nobody who cares about me… Woke up this morning but I’ll be better off dead…’ Would Colin had been happier if he did not know Chloe? Was their love worth the trouble, the heartache of departure? Yes, if only he learns to rise from his blues. We do suffer from loss, but we can learn to treasure more now, with less attachment too, thus suffering less. This is how we shall live on, and love on…

Related Article:
The Lady Who Did (Not) Lose Her Beloved
http://thedailyenlightenment.com/2014/08/the-lady-who-did-not-lose-her-beloved
TOP