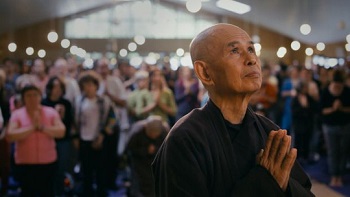 The film titled “Walk with me” is a cinematic journey into the world of a monastic community that practices the art of mindfulness with 91-year-old Zen Buddhist Master Thich Nhat Hanh.

The film was shot by two British directors Marc J. Francis and Max Pugh for three years mainly in Plum Village, a Buddhist meditation centre in Dordogne, southern France. The place is the rural monastic community that Nhat Hanh set up in 1982.

The directors also followed Zen Master Thich Nhat Hanh to other places, including Europe and North America to make the documentary.

Born in the central city of Hue in 1926, Thich Nhat Hanh is among the pioneering Buddhist leaders in the popularisation of the religion in the West.

The Zen Master was nominated by Dr. Martin Luther King Jr. for the Nobel Prize in 1967. He has published more than 100 books, including more than 40 volumes in English.

He is active in the peace movement, promoting nonviolent solutions to conflict and he also refrains from animal product consumption as a means of nonviolence towards non-human animals.

In the 1960s, he launched a movement of Buddhists in Southern Vietnam aiming to call for an end to the Vietnam War. He has lived in France since 1966 when he left Vietnam.

Last year, he returned to visit Vietnam for a week.
TOP