Toronto, Canada -- A HIGHLIGHT of this year's Toronto International Film Festival is not some cutting-edge piece of digital blizzardry, but a revival of Robert Flaherty's 1922 silent feature Nanook of the North , a true-life drama of Eskimo subsistence and survival, such a hit in its day that many histories count it (inaccurately) as the first documentary ever made. 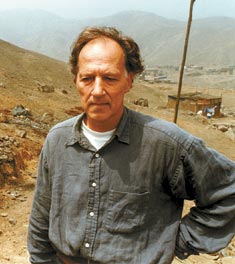 << HERZOG: In touch with his inner Buddha

Ripoffs, knockoffs and clones being nothing new even in cinema's earliest decades, Nanook imitators kicked off a cycle of nonfiction or thinly dramatized features. These were set in exotic, often migratory cultures, and utilized the cine camera's gift for bringing the faraway to your neighborhood movie house, long before the Travel Channel.

The Cleveland Museum of Art's “Panorama” film series itself migrated to Strosacker Auditorium on the Case Western Reserve Campus while the CMA undergoes renovations, and commences tonight at 7 with a documentary series featuring Wheel of Time , the local premiere of a 2003 nonfiction voyage by Werner Herzog.

Herzog has long been called filmmaker who goes to extremes, whether in his narrative pieces such as Fitzcarraldo or the numerous documentaries he has made concurrent to his violent script arguments with Klaus Kinski. This is a bit facile — if Herzog's name were on To Be and To Have , the critics would rave over his “extreme” take on rural French one-room schoolhouses.

But if the formula is applied, then Wheel of Time must go on the books as a study of “extreme” Buddhist religious worship, perhaps as gentle a topic as one can imagine, but which for Herzog means an epic trek to the deserts of northern India, where a tent city of pilgrims arises in anticipation of the arrival of a living god, his Holiness the Dalai Lama, exiled leader of the Chinese-occupied nation of Tibet. He's to preside over a “Kalachakra” festival near a mountain designated in popular folk belief to be the center of the universe.

Worshippers arrive from all over, one man from the remotest Himalayas requiring two translators to make himself understood. Some pilgrims have taken three years to get here, allowing themselves to move forward only in “prostration,” falling to their hands and knees with every step (this should put things in perspective for those intellectual snobs who think an hour spent in church every week is a waste of time).

Central to the Kalachakra is the creation of a sand mandala, a painstakingly elaborate sacred design worked over by monks in minute detail, that will only be destroyed in the end to symbolize the impermanence of all things created in man's world.

A Buddhist sand mandala by Namgyal monks is currently under construction (a six-week process, through the first week of October) at Cleveland City Hall — hey, if it's going to take divine intervention to succor this city, may as well cover all the bases. But in explanatory terms, much of Herzog's March of the Pilgrims raises more puzzles than it answers for mainstream Western viewers, and the filmmaker, not spoon-feeding us, asks the Dalai Lama a few deep-dharma questions, just enough, perhaps, to clue us in that he's clued in, before going back to surface details of the faithful. A monk defends his thesis on Buddhist concepts of emptiness and reality in a long, formalized debate of wild gesticulating and hand-slaps. It's unsubtitled, and if you haven't picked up a little Tibetan in high school or in the Scouts, you'll be lost as to what's being said. Where are Grasshopper and Master Po when you need them?

There may be a point to Herzog's circumspection; if Enlightenment for Dummies were available, everyone would think they're the center of the universe (not pleasant, if you've met anyone like that). Wheel of Time is more contemplative and less touristy than Short Cut to Nirvana , the recent documentary about a vast Hindu religious gathering, and its soundtrack music shows that Herzog hasn't forgotten his old friends in Popul Vuh.

A special guest scheduled at Strosacker after tonight's screening will be the Venerable Tenzin Thutop from the Namgyal Monastery — a monk from the personal monastery of the Dalai Lama of Tibet. He may indeed find some eager disciples at the relocated Panorama during the Q&A. Compared to the devotees in Herzog's lens, the additional journey across Euclid Avenue is the most minor hardship, believe me.