Singapore -- No mere typical monster movie, the 2005 "King King" is a renewed classic myth for our times, of timeless truths about the human tension and (dis)connection with the animal kingdom. 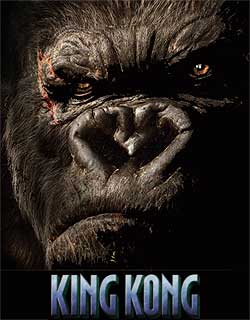 With his film crew, director Carl Denham (played by Jack Black) is an mercenary opportunist in every sense, who chances upon the ominous Skull Island, and discovers Kong (played by Andy Serkis) - an awesome giant "prehistoric" gorilla feared and worshipped by an equally frightful savage tribe - for his sheer "king" size and might.

While barely able to stay alive, Carl conceives his supposedly brilliant money-spinning scheme, of capturing and enslaving Kong for America, so as to milk him for all he is worth as a theatrical freakshow attraction. He succeeds to some extent, at a terrible price though, as Kong unwittingly wrecks havoc in New York when he breaks free - as any frightened animal would.

Sometimes, the real monster only appears more civilised, even dressed in suits, having nothing to do with size at all, having instead everything to do with the mind set on devious self-serving profiteering. That which is most monstrous is largely invisible - the poisons of the human heart - greed, hatred and delusion. Throughout history, animals have been unwillingly exploited for countless selfish human purposes - for food (eg. meat and animal produce), hide (eg. leather and fur), sports (eg. racing and hunting), entertainment (eg. performing in circuses) and experimentation... Yes, Kong is just one single animal, fictitious and humongous as he may be, who also stands for countless real and smaller animals, who are continually incarcerated, tortured and eventually killed by humans for his own advantage. Perhaps it takes a "monster" like Kong to contrast and show the hidden monsters in us, ones much more gargantuan than any monster out there.

An unlikely yet credible friendship develops between starlet Ann Darrow (played by Naomi Watts) and Kong, while an equally believably soulful Kong develops protective and loyal infatuation with her. Not only does the proverbial beauty meets the beast, she learns to tame and appreciate the hero in him. In this rich full-coloured update of the 1933 black and white movie, the audience is shown the nuanced human nature of Kong, just as we see the "civilised" yet bestial nature of man.

What differentiates us from animals then becomes grey and blurred - nothing black or white. Man or beast, we forget we are probably closer simian relatives than imagined. Of human or bestial nature, like all sentient creatures great and small, we have Buddha nature. We might not speak each other's language, but we can learn to look deeply at each other in the eye. Maybe then, can we learn to see eye to eye.

Kong was largely a harmless gentle giant, ferocious only when threatened. No, he does not eats damsels in distress - he was even featured chewing shoots for dinner. Gorillas are afterall vegetarians! In the jungle where Kong is King, he was worshipped as an invincible god-like being by the natives. With no intention to rule the island, he was by default king, forced to fight dinosaurs, giant bats and insects for his own survival. Out of the familiar context of the concrete jungle that is the city, the film crew explored the jungle to rescue Ann, who was forcibly offered to Kong, as a "sacrifice" he never asked for.

The film crew had to fend off other "monsters" along the way, which were mostly simply larger than life versions of nature. While fear ensued, surely, respect for nature correspondingly "enlarged"! Perhaps then, we should learn to stand more in the shoes of "lesser" creatures of everyday life. Let us do not onto others that which we would not have others do onto us. Yes, the golden rule should rule.

In an unbridled frustrated rampage through the city, Kong scales to the spire of the world's tallest and most famous building of that time - the Empire State Building. Why? Out of a primitive pridefulness perhaps, as he seeks refuge and stakes territorial claim over the land, while unknowingly rendering himself an open target to fighter planes.

This iconic cinema image of Kong atop the building symbolises human's greatest "monumental" achievement topped by nature. Without much consideration, man kills this majestic creature - he destroys nature, in a fit of angry and fearful misunderstanding, of not comprehending that Kong merely wanted to be left alone with the love of his life, even at the cost of his own life. In a dramatic showdown, he falls to his death after being shot numerous times. Tragically, he was the true victim, who never wanted to victimise anyone.

A policeman tells Carl at the end of the story, "Well, Denham, the airplanes got him." Carl replies, "Oh no, it wasn't the airplanes. It was beauty who killed the beast." But was it really so? Carl did not realise that it was his greed that led to the doom of the innocent Kong. It was man's fault. Kong was only being himself, being natural, while man fared no better than a beast in bringing him down without trial or reason. As mentioned, this is no typical monster movie - it is an elaborate fable warning against the monster in us!