Berlin, Germany -- Milarepa is a glossy, lovely movie from Bhutan that details the life of Tibetan Buddhism’s most revered saint, who was born as Thopaga in the eleventh century. 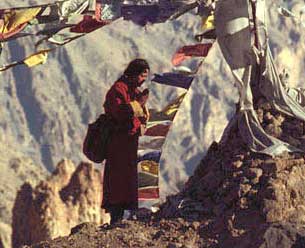 While somewhat slow-moving at times – although would one want a life-transforming awakening accompanied by MTV-style editing? - its stateliness, deep spirituality, gorgeous mountain scenery and transcendent music should make it a big hit on the festival circuit.

Commercial prospects may be a bit more limited, since the film-making is somewhat stately at times, even verging on the old-fashioned. But production values are superb and it’s clear from the start that a lot of money went into the production.

After his wealthy father dies, Thopaga’s inheritance is stolen from him by Gyaltsen (Gonpo), an unscrupulous uncle. Kargyen (Tethtong), Thopaga’s mother, vows revenge. Selling the last of the family’s possessions, she enrols Thopaga (Lodro) in sorcery school, under the guidance of Yongten Trogyal (Tobgyal), so that he may learn how to wreak havoc upon the uncle and his family.

Thopaga enlists the elements to crush Gyaltsen and much of the surrounding village during the wedding of his son. Of course, all that is accomplished is more violence: when the militia sets out to stop Thopaga, he in turn is forced to unleash a huge boulder that crushes them all.

Realising that revenge accomplishes nothing, Thopaga retires to a Buddhist monastery, from which he sets out on the true path toward inner peace.

From the producer of The Cup – director Neten Chokling also appeared in that film, as did lead Jamyang Lodro - Milarepa is a first class production all the way, and the acting is top-notch, even when performed by non-professionals (it was shot in India using Tibetan locals).

The historical props are also thoroughly convincing, and viewers will feel that they’ve gained some sense of Tibetan history and culture.

Kelsang Chukie Terhong, who plays Thopanga’s mother, sings some of the film’s haunting songs, while others are sung by Tibetan nun Ani Choying Drolma. All of these charming details go some way toward compensating for the earnest, sometimes overly picturesque sluggishness at the centre of the work.