"The Constant Gardener" of the Garden of Life

Singapore -- In the multiple award-winning and nominated film, Justin Quayle (played by Ralph Fiennes) is "The Constant Gardener" - a most diplomatic gentleman diplomat. Shy and reticent in nature, he receives the rudest shock of his life when he realises that his deceased wife Tessa (played by Rachel Weisz) was an undercover activist. 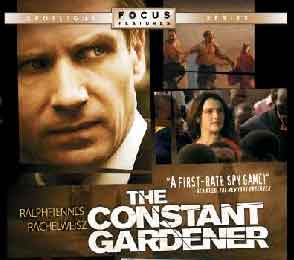 Tessa was killed in a staged "accident" - to thwart her attempts to expose disturbing truths about a international pharmaceutical conspiracy. Filmed in a severely impoverished Third World country, this is a film of much social realism, inspired by real life events. It is an expose, though semi-fictitious, of the power of political-commercial greed which unceasingly exploits much of the helpless poor.

"The Constant Gardener", originally written as a novel by John le Carre, was dedicated to real life activist Yvette Pierpaoli, who was said to have "lived and died giving a damn." Pierpaoli, who Tessa's feisty character was based upon, lived a lifelong vocation of selflessly aiding the needy, in dispensing food, medicine and shelter. Tessa realised that a giant drug company was secretly and illegally engaged in the practice of testing dangerous "medicine" on humans - for a form of disease predicted to have a worldwide outbreak in the near future. Failed subjects of these experiments die, and are disposed of discreetly. It was as if the lives of Third World citizens were cheap enough to be taken for granted like animals, as if it was justifiable to feed them potential poison in the guise of medicine.

If it is wrong for humans to use fellow humans as guinea pigs, then surely is it also wrong to use guinea pigs as guinea pigs! That we know the phrase "guinea pigs" has a most ill connotation already suggests that we know we should not support animal-testing for selfish human benefits. Surely, there are many kinder alternative ways to benefit humankind. (Please see http://www.stopanimaltests.com, a website by PETA or People for the Ethical Treatment of Animals, on how you can help end animal testing.) Not only were sick and poor fellow humans tested upon, there is presently a lack of focus on finding cures for rampant diseases of developing countries - because it is deemed less profitable, in contrast to seeking cures for "First World diseases". This lack of equanimity while leeching off the poor is most sadly samsaric.

It is said that Samsara will always be the breeding ground of diseases - because of our spiritual disease of being struck by the three poisons of greed, hatred and delusion. In fact, being infected by these poisons is the very reason that make here Samsara, that perpetuates Samsara. When a company uses killing to seek a cure for a disease that has yet to arrive, surely, the greater disease of greed for profiteering has already arrived, has already begun to take its deadly toll on the innocent. It is indeed frightening to see the well-oiled mechanics of greed at work, and even more frightening to see those aware of the deception being numb and willing accomplices to this heinous crime against humanity. In the words of a character in the film, "The pharmaceuticals are right out there with the gun-dealers." They who are supposed to heal instead - kill. What great and sickening irony.

Initially, even at the prompting of Tessa, Justin was reluctant to help a mother and son by giving them a lift, without which they would need to walk hours in the desert's scorching sun to reach home. He commented that they cannot help everyone, that there are millions of the poor, that helping them is what the charitable agencies there are for. A disappointed Tessa rebutted this by saying that despite the truth of her husband's words, it was also undeniable that they could help the two in the moment. Obviously, the agencies are never enough. The good news is that we can all be free agents of charity too. With all, if not most, of us (or more, if not most of us) giving rise to the Bodhisattva aspiration of helping the needy, surely will there be enough help for all the unfortunate in our world!

After Tessa's demise, Justin learnt to see the world from her point of view, thus reversing his apathetic mindset. When urged to forsake a single child while attempting to escape in a shootout, he remarked that he might not be able to save the thousands, but he knew he could save that one child. In that one scene, the Bodhisattva vows suddenly make a lot of sense. Suddenly, we realise how true it is that deep down, we do not wish to, and cannot bear to forsake anyone in suffering. Suddenly, we realise why every one of the great Bodhisattvas vowed to save absolutely every single being in Samsara. Suddenly, we want to be like them too.

Not being able to save all in the moment is not important - doing one's best in the moment is. When we answer the call of our Buddha-nature to give rise to this perfect all-embracing compassion, we are being true to ourselves, being true to the world. If you are to imagine this world being near-perfect instead, with only a single being in suffering - a guinea pig alive and kicking in pain, what would you do? You would naturally want to do something to save him. We would not be able to turn our back on the suffering of even the tiniest animal. The astounding truth is, then, even more obvious - we cannot even stand the suffering of one single being, animals included, much more to say, the suffering of the masses. (Please see a related interactive story exploring this idea at http://www.moonpointer.com/essays/best/1.htm)

The drug industry happens to be one of the most massive and lucrative businesses following that of oil. This only adds to the irony that the drugs they manufacture are priced so high that most of the poor cannot afford to pay to save their own lives, while the rich get richer and arguably healthier. "The Constant Gardener" is a story of responsibility - of individuals, of corporations, of activist groups, and of governments. But most of all, it is an appeal to our collective conscience against all forms of human greed and corruption exploiting other fellow humans. We are, after all, one big family. If we do not take care of each other, who will?

Justin's hobby was gardening. Usually passive and patient in nature, the loss of Tessa fired him up, "forcing" him to confront the disturbing truths of injustice in the world out there. As he desperately sought to right the wrong of Tessa's murder and that of so many others, he reminds us that we are voluntary gardeners like him too, who plant seeds of good and evil in this garden of life. What fruits we reap or not depend on what we sow or not. What seed will you plant next? Will it sprout more poison for humanity or will it grow more hope? Like it or not, we are all constant gardeners - with every thought, word and deed. For a world like a Buddha's Pureland to be actualised in ours, for a world without any suffering (be it of human or animal form), may we constantly plant only seeds of goodness - only of generosity, loving-kindness and wisdom.