Fifteen organisations from all Buddhist traditions have joined hands to make the inaugural Wesak International Film Festival (WIFF) a success.

Kuala Lumpur, Malaysia -- Wesak Day celebrates the birth, enlightenment and passing of Lord Buddha. It is also a day to remember his teachings of understanding, respect and tolerance. 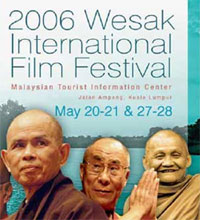 This year, 15 organisations from all Buddhist traditions are jointly organising the inaugural Wesak International Film Festival that will be held over two weekends on May 20 and 21 and May 27 and 28.

“We hope to highlight the essence of Lord Buddha’s teachings through the feature and short films and documentaries. Film is a powerful media. No amount of lecturing or schooling can evoke the sentiment that films have proven to be able to,” says Nalanda Buddhist Society executive committee member Tan Ho Soon.

“But as you will see, the films are not strictly about Buddhism. We hope the audience will find universal messages of understanding, respect and tolerance. The films also depict personal triumph over challenges.”

The festival is the first of its kind organised in Malaysia and Tan believes, maybe even South-East Asia. Several Buddhist organisation representatives had come together last November to discuss plans for this year’s Wesak Day (on May 12) celebrations when Benny Liow, organising chairman of the film festival, mooted the idea for a film festival. It went down well with everyone and soon the number of participating organisations grew to 15.

“We hope that the turnout will be good. If the response is positive, this may become an annual event. We especially hope to see many families attending.

“At the end of the festival, we hope those who came will go back with a clearer understanding and appreciation for peace. Peace is not just about shouting slogans, but also the actions you take. And how you act will determine the kind of peace and happiness you receive,” concludes Tan.