Singapore -- If you have yet to be infected by "The Da Vinci Code" (DVC) fever yet, here's a brief synopsis of it in the words of the author - "A renowned Harvard symbologist is summoned to the Louvre Museum to examine a series of cryptic symbols relating to Da Vinci's artwork. In decrypting the code, he uncovers the key to one of the greatest mysteries of all time… and he becomes a hunted man." 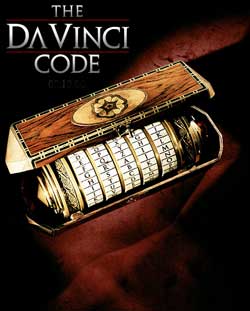 Some of these mysteries question whether Jesus was divine, and whether he was married, and whether the Bible truly records all that he had taught. The DVC story is an intellectual thriller filled with high adventure, murderous intents, betrayals and such - almost as compelling as the conspiracy theories it revives.

At the opening of the DVC novel is a "fact" page, which states that the documents, rituals, organisations, artwork, and architecture in the novel do exist. It is interesting that while it does not claim that the ancient conspiracy theories discussed by its fictional characters are true, many saw the novel as "evangelising" them to be reality. This is where all the debate comes in - as to whether DVC is truly fact or fiction. Most readers tend to take either side, unable to sit on the fence. But is the truth as simple as sticking to one side or the other? Could there be a blend of fact and fiction in DVC?

Well, the author claims it is the result of much research. Ironically mirroring the DVC's declaration of "fact", Sir Ian McKellen (who stars as Sir Leigh Teabing in DVC) remarked - "I've often thought the Bible should have a disclaimer at the front, saying 'This is fiction.' I mean, walking on water? I mean, it takes an act of faith." Is he right? To believe in the incredible does take a leap of faith. This perhaps applies to both books.

How should fellow Buddhists view the DVC phenomenon? Does it offer us any lessons? As the Buddha encourages each of us to be objective in realising the objective truth, it is more wise to consider the plausible as plausible, instead of simply forcibly brushing the plausible to the side of truth or fallacy. Perhaps this attitude is best exemplified by a remark made by Tom Hanks (who stars as Professor Robert Langdon, the hero in DVC). When asked whether he believed that Jesus married Mary Magdalene, he replied, "I don't know, I wasn't around at the time." Brilliant and right answer! We need to realise that all we know about the real Jesus is not first hand information.

Faith about what he was like is much dependent on our faith in historians, both religious and non-religious. If we find it hard to place all our faith in historians, who do err and contradict each other at times, who else can we trust but ourselves, with our personal objectivity? If the biography of a religious founder is vague, this should remind us that the proof of a religion's worth is more in the substance of its teachings, than the substance of its history. It is most intriguing how we tend to switch allegiance when we alternate in hearing both sides of the story. Even each DVC documentary maker seems to be biased to some extent. One documentary might seem to totally debunk the DVC, while another almost totally supportive.

Does the above issue of "ambiguous identity" apply to the Buddha too? Of course, historically, the Buddha walked our Earth, more than half a millennium before Jesus did. This is solid history. In fact, his life is well documented in voluminous scriptures. So much are they that they cannot fit between the covers of a single handy book. They record his teaching career spanning 45 years, which happens to be about 41 years longer than Jesus'. It is interesting to note that even if the Buddha is proven to have never existed, his teachings would still prove relevant - simply because they are based upon his objective realisation of the truth, and because he urges us to likewise objectively experience the truth for ourselves; to never be dogmatic - not even over his words.

The biggest lesson the DVC phenomenon has for us is that it is potentially spiritually dangerous to be dogmatic. Just as it is inappropriate to mistaken the DVC novel to convey solid truth, is it probably also inappropriate to wholeheartedly believe any other book to purport the whole truth of life, the universe and everything? We need to bear in mind that many holy books were neither written nor compiled by their religious founders.

Are we simply to be converted by any book, or by our own wisdom? Is the DVC a new "Bible" of heresy, or of forgotten and suppressed truths? Or is it somewhat in between? Are we people of an ancient book, or people of a modern bestseller? But must we all be people of any one book alone? In the words of the Buddha, "Of course you are in doubt. When there are reasons for doubt, uncertainty is born. So in this case, Kalamas, do not go by reports, by legends, by traditions, by scripture, by logical conjecture, by inference, by analogies, by agreement through pondering views, by probability, or by the thought, ‘This contemplative is our teacher.’ When you know for yourselves that, ‘These qualities are skilful; these qualities are blameless; these qualities are praised by the wise; these qualities, when adopted and carried out, lead to welfare and to happiness’ - then you should enter and remain in them." (From the Kalama Sutta) Though the DVC's conspiracy theories might exemplify the danger of clinging to dogma taken for granted, the DVC novel itself should not be clung to - or it would become dogma too. Both extremes of dogmatism and dismissiveness stray from the Middle Path of fair and wise confidence in one's faith.

What if the book you believe in, be it the DVC or another, is erroneous? Whether DVC is fictitious or not is not the key issue - as it is a powerful lesson on the danger of blindly believing any book to be infallible. Even Buddhists are open to the fact that some sutras might have been lost in translation to some extent. The Buddha's advice on not going "by scripture" alone thus guards against the integrity of his own teachings in spirit, be they scriptural or not. Is there a need to insist a single book to tell the whole truth, when there are countless other supposedly holy books too?

The best person to judge what is truly holy and worthy of faith is oneself, not anyone else - or anyone's book. Remember - might or the majority does not always wins the truth. For instance, recall the unenlightened Inquisition's suppression of the "heresy" that the Earth is not the centre of the universe, and how most humans in the past believed the Earth as flat. Consider the thousands (some say millions) who have been historically "witch-hunted" and burned at the stake, and those who have died or massacred in the name of their faith. Such is the harm of self-righteous religious intolerance, or enforced dogma upon so-called non-conforming "heretics".

Much of DVC hankers on whether Jesus was human or divine, and whether it is possible to be both. It is important to note that Jesus is not the only person regarded by some to be divine. The Buddha however, can be seen to strike an interesting Middle Path between being human and being divine. A god in a prior life due to boundless accrued merits in many lifetimes, he chose to be born divinely as a most exemplary human, so as to become a perfect being - a Buddha - one who transcends the limitations of all humans and gods. He declared himself to be "Buddha" - one awakened to reality, who is neither a god nor human, but a "teacher of humans and gods". What determines divinity? Is divinity the ability to walk on water? If so, Jesus was not the only who could do that. In fact, the Buddha once teleported an entire retinue of his disciples across a river. Is divinity the ability to resurrect? The Buddha, being beyond life and death, is still able to manifest to the devout and in other world systems to inspire followers. More than dying for us, the Buddha lived a full life for us, for 45 years - to compassionately share his wisdom of the path to liberation. Even his manifested "demise" was a "final" teaching - to remind us to treasure his completed teachings, and to actualise them, before death reaches us first.

If, as the Buddha taught, that we are noble not by birth, but by what we do after birth, then the idea of the need to rediscover the bloodline of Jesus in DVC is somewhat puzzling. Surely, the truly worthy will prove themselves to be so, whether one is of a "worthy" bloodline or not. The Buddha's disciples, for instance encompassed enlightened Arahants previously of the lowest castes of society. Enlightenment is our birthright - we have the right to ennoble ourselves by walking the Noble Eightfold Path that the Buddha taught. We can all become more than divine - by becoming Buddhas, ones with perfect compassion and wisdom.

As remarked in the movie, "We are what we protect, what we stand up for." If so, when we protect fallacy or what could be untrue, we are untrue to the world and ourselves. Are alternative or non-traditional ways of thinking about our religion always downright wrong? Let me re-quote the Buddha - "... don't go by reports, by legends, by traditions, by scripture..." May we always be spiritually brave, not so much to stand up to opposing beliefs, but to objectively look at the credibility of these beliefs, and clarify them as appropriate. We have to learn to be "uncomfortable" with the disturbing - to be uncomfortable enough to want to see if our faith can stand the test of sufficient rationality.

Evidence of conspiracy theories might hint of proof, but the proof of the pudding is in the "eating" - in the questioning, practising and actualising of the teachings you treasure. As the Buddha put it - to test his teachings as if one were testing for real gold. In the grey cloudiness of history, which is often inaccurately rewritten by the "winners" of wars and conflicts of interest, truth is often lost, or mixed with fiction and legends. At the end of the day, the onus lies on us to filter away the fiction to discern the facts. Are we content to have muddled faith? Or should we cultivate faith with crystallised clarity?

Towards the end of the movie, Langdon mentioned that "What really matters is what you believe." This is true in the sense that we are nothing but a bundle of both our false and true beliefs - and that really does matters to us, be it for better or worse. Faith alone then, is not the answer, especially when it is built upon uncertain grounds - that would render faith blind. Wisdom is needed to balance the equation. Thus does Buddhism speak of the spiritual faculty of "saddha", which translates as "confidence", more so than "faith". Confidence is that founded upon the marriage of both reasonable faith and experiential wisdom. Do you have sufficient saddha in Buddhism, or in whatever faith you are of? Perhaps, this is the final question that DVC asks. And the answer has to come from you, and you alone.

Some Fiction about Buddhism in DVC:
http://www.moonpointer.com/index.php?itemid=608

The Danger of Being Dogmatic:
http://www.moonpointer.com/index.php?itemid=607

A Buddhist Perspective of God:
http://www.budsas.org/ebud/beyond/beyond01.htm